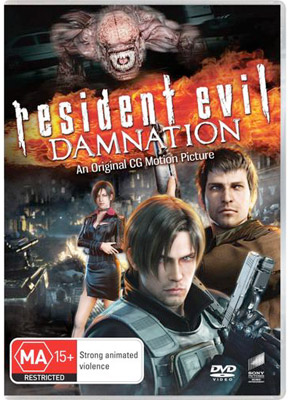 The anticipated sequel to the highly successful Anime film Resident Evil: Degeneration is here, with the computer-animated horror Resident Evil: Damnation. Leon S. Kennedy returns as the protagonist, finding himself in a European warzone where the worst kind of evil is about to be unleased.

United States Special agent Leon S. Kennedy sneaks into a small Eastern European country to verify rumours that Bio Organic Weapons are being used in war. Right after his infiltration, the U.S. government orders him to leave immediately. Determined to uncover the truth, Leon ignores the order and enters the battlefield to end the chain of tragedies caused by the B.O.W.s.

With no weapons or support from the U.S., Leon goes rogue to face the latest terrifying monsters and mutated baddies behind enemy lines. Stumbling across the facing off with a mysterious creature, could this see the end of our hero?