SIDS and Kids today announced a major Red Nose Day partnership with Australian Radio Network (ARN) and iHeartRadio, which will significantly support their mission to help save little lives.

Celebrating its 28th anniversary in 2016, Red Nose Day brings much-needed attention and funding to SIDS and Kids' research, education and bereavement programs for sudden and unexpected deaths in infancy. This innovative new partnership with Australia's leading commercial radio network and its digital entertainment platform iHeartRadio will enhance the reach of SIDS and Kids' message, with an aim to further reduce the number of sudden and unexpected deaths in babies and children in Australia, including stillbirth, SIDS and fatal sleeping accidents.

A key component of the partnership is the creation of two dedicated -Red Nose Day' radio stations that can be heard on iHeartRadio via desktop or mobile. Launched this month, Red Nose Radio on iHeartRadio caters for primary schools and Little Rockers Radio, already available on iHeartRadio, will run Red Nose Disco programming from June 1 – catering for the pre-school audience.

These stations will comprise family-friendly music and engaging content tailored to each age group with Little Rockers Radio focusing on music for the under 5 year olds from loved pre-school artists such as The Wiggles, Justine Clarke, Playschool, Sesame Street and more. Meanwhile, the new Red Nose Radio is a pop station for the primary school aged children, with artists like Taylor Swift, Justin Bieber, One Direction, Katy Perry, Bruno Mars and other Top 40 artists, but with all songs at a G rating.

Both stations will feature many of Australia's much loved children's musicians and presenters, ARN on-air personalities from the KIIS, Pure Gold and The Edge networks, and other celebrity supporters of Red Nose Day.

Through a multi-faceted campaign including on-air and online promotion across ARN's KIIS FM and Pure Gold radio networks and The Edge, Australian pre-schools and primary schools will be encouraged to host fundraising discos, using these radio stations as their soundtrack. The children (and no doubt their parents!) will not only dance away to their little heart's content, they'll also be helping save little lives through gold coin donations and selling Red Nose Day merchandise at these events.

And while both pre-schools and primary schools across Australia will host their official fundraising disco events on Red Nose Day, audiences can tune in to enjoy the dedicated stations at any time (for Red Nose Radio) and from June 1 (for Little Rockers Radio) until June 24.

Further to the creation of these new radio stations, ARN and iHeartRadio will be supporting three dedicated iHeartRadio Little Rockers Red Nose Disco public events at Luna Park Sydney, Luna Park Melbourne and Bounce Tingalpa in Brisbane on June 16 - to raise awareness and funds ahead of Red Nose Day. Designed for pre-schoolers and their families, tickets to these events are free, and will be open to the general public, however registration must be made at www.rednoseday.com.au. Kids and families are invited to enjoy a dance to the tunes of Little Rockers Radio on iHeartRadio, plus experience musical performances and entertainment from yet-to-be-announced celebrity artists, as well as meet some of their favourite ARN on-air personalities. More details will be announced in the coming weeks on these events. 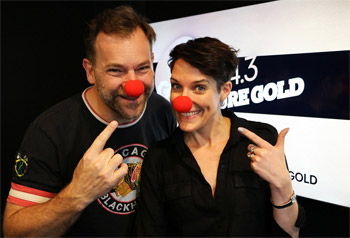 Additionally showing their support for this important cause, ARN are making a cash donation to Red Nose Day, aiding SIDS and Kids with their lifesaving work on sudden and unexpected death in infancy.

Tony Kendall, CEO of Australian Radio Network says: 'We are extremely proud to be working with SIDS and Kids on their iconic Red Nose Day, in its 28th year in 2016. The organisation has made such a positive impact on so many Australian families and we're honoured to help them continue their good work,"

'We're excited to be working together on such an innovative media campaign that we hope will broaden the reach of their key messages, increase donations, and enable kids and families to have fun while raising money to continue SIDS and Kids life-saving work." continues Tony.

Sarah Morrissey, Founder of Little Rockers Radio says: 'I am delighted to be working with Australian Radio Network, iHeartRadio and SIDS and Kids to see the Little Rockers Red Nose Disco really come to life. The concept was born out of the loss of my nephew Dylan and it's humbling to see Australia's leading commercial radio network come on board this year to support the very important work of SIDS and Kids.

For me personally, this disco is in memory of Dylan and it seems nice to think that thousands of little children can dance and play and have fun across Australia all at the same time."

Key Details on how to get involved:

There will be two stations:

How pre-schools and primary schools can register to host their own fundraising discos: Go to rednoseday.com.au to register, and a pack containing all the necessary tools will be mailed out. Schools can encourage students to pay a gold coin donation to join the fun! Discos can be held on Red Nose Day (June 24) any time between 9am–12pm or 1–5pm AEST, or any day from June 1 - 23 at the same times.

Dates radio stations will be available:

Other ways supporters can get involved in Red Nose Day: Purchase a red nose or any other Red Nose Day product, make a donation, or set up your own Everyday Hero 'Dare 2 Care" fundraising account. Go to rednoseday.com.au for further information on how you can get involved.