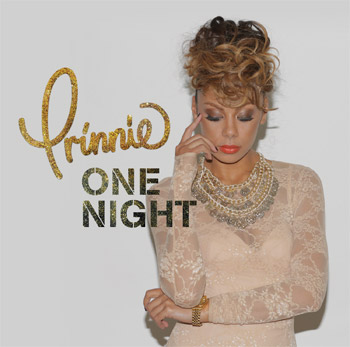 One of Australia's hottest pop stars, Prinnie Stevens is excited to announce that her anticipated debut EP, One Night and title track will be available from August 8th. The Pop songstress' first solo EP is available to pre-order now through iTunes.

One Night is the follow up to her 2013 debut single Don't Wake Me Up which was produced by Paul Harris (Dirty Vegas) and was the #1 most added track at Australian radio in its first week, scoring out of the box ATB additions at all CHR networks and reaching top 25 on the HOT 100 Airplay chart.

The last 12 months has been incredibly successful for Prinnie. She is currently lighting up our television screens on Channel Nine's juggernaut The Voice Kids as Backstage Host and mentor. This role is close to her heart as she is an ambassador for MMAD, a charity that motivates young Australians to fight the battle of life through the inspiration of music and the use of mentorship.

In 2013 Prinnie teamed up with Mahalia Barnes and released an album of soulful duets Prinnie + Mahalia: Come Together which debuted at Number 1 on the R&B/Soul charts. They also took the album out on the road with a nationwide tour.

One Night is a six track EP that includes debut title track One Night co-written by Prinnie, along with new tracks MT also co-written by Prinnie and new track Shot of This Love. Also included is Don't Wake Me Up, produced by Paul Harris one half of Dirty Vegas and two remixes featuring DJ Brooke Evers (signed to SKAM artists in the US - who also represent Lil Jon.)

'I am so excited to be releasing a body of work and allowing people to get a better insight to the artist that I am. The urban pop sound spans from straight pop to RnB and Hip Hop. I really enjoyed writing some of the tracks and collaborating with Brooke and the other producers. I can't wait for everyone to hear it." Said Stevens of her EP release.

Question: How would you describe One Night?

Prinnie Stevens: One night is an upbeat, hearty song about a love fair that never lasts as long as you want it to.


Question: What else should we expect from the EP?

Prinnie Stevens: My style is Urban Pop, so you can expect some hiphop, RnB flavours but mainly, pop. Its somewhere between Katy Perry, Rihanna, and JLo.


Question: What inspired the track, One Night?

Prinnie Stevens: One night, especially the video was inspired by a long distant love affair. Short amounts of time together that are intense and loving times but always too short. It talks about making the most of the time given, and this is in life too. Just making the most of what you have and being grateful for all the good in your life.


Question: Tell us about filming the video for One Night.

Prinnie Stevens: Filming the video was awesome! So many people said they couldn't believe just how calm the set was. I have worked with the director Cristine before and we make sure we time everything down to the minute and prepare everything before so that the day runs smoothly and we get to enjoy the process. The dancing, the singing, the costumes, the makeup! All that good stuff!


Question: How was it travelling on The Voice tour?

Prinnie Stevens: Travelling with the Voice tour was so much fun! I got to know all the top8 and they were great! I watched the show like everyone else and it was great to get to them all and get an insight to their personalities. The best thing about the Voice is it finds REAL genuine artists, and that always makes for a passionate group of people! They were all so different, but all amazingly talented and welcomed me into the group straight away. I did feel like the mum of the group, it was nice to know I could help them with any questions they had before finishing the tour and going off into the real world. Cause that's when the real work starts!


Question: What's a typical day like as the backstage host for The Voice Kids?

Prinnie Stevens: There is no typical day on set! The best thing about the show is the kids, and each and every one of them is so dramatically different. There is Robbie, who is a bundle of energy and you can't get a word in, then there's Ethan who really kept to himself and just wanted to shuffle his good luck cards. The girls were different too… Alexa was just a bundle of energy but then there were girls like Bella who were very concentrated and calm before heading out. The greatest thing about the show is the kids and their individuality, and this made each and every day an adventure!

Prinnie Stevens: Yes I do. I actually co-wrote One Night and other tracks on the EP. I am inspired by real life. The emotions that come up every day are the best thing to write about, because they're real and when you tap in on real feelings you can really make magic. Sometimes if I'm there for a friend through a hard time, it's hard because you can't help them, all you can do is be there for them and hope that the advice you give will help them. What I do is write. Its therapeutic and helps me get through some really hard times.

Prinnie Stevens: Oh yeah! Of course! The music business is a tough and bumpy road. It can pull you down, but when you get up again and keep on going, the reward is so much sweeter. I'm so glad I never gave up. I just knew in my heart that someday I would be able to release my own music and do what I love.

Prinnie Stevens: That's a hard one. But I would have to say performing live. I'm a dancer too, so I love to combine the two and perform to a live audience. I feed off their energy; it always pushes you beyond where you thought you could go. The energy of a crowd is a wonderful thing, and once you get a taste of it, you want more and more and more.

Prinnie Stevens: Janet Jackson and Whitney Houston were always my biggest inspirations. Janet's style and the way she was able to dance and sing and make it look so effortless. She always kept up with the dancers and never once did you want to take your eyes off her. Whitney was just Whitney. I related to her so much. And her voice was just out of this world, it made me strive to be a better singer. Listening to her even now makes me want to do better. She is just phenomenal.

Prinnie Stevens: The biggest challenge was just trying to be understood. I think that is actually the best thing about shows like The Voice. It makes you concentrate on who you are and makes you represent the best version of you, because when you're competing with other people you have to be true to whom you are, otherwise people can read that it's not real. I am still revealing who I am as an artist, and that's why I'm so excited to be releasing a body of work within the EP. The EP allows people to get to know me better musically and I'm so excited about that.

Prinnie Stevens: There is no such thing! I have so many different things going on in my life; there is not one typical day that I can recall. Most days I do drop my daughter to school and then head off into the city for whatever awaits me. Whether it's a studio session, radio interviews, performances, filming with the voice kids or singing somewhere I'm always busy doing something and love coming home to my little girl. We like to cook and watch movies to unwind. That's my favourite time of the day.

Prinnie Stevens: My favourite part of being a music artist is writing songs and then being able to perform them in front of a live audience. Seeing the reactions and being able to move people with your own music is just amazing!

Prinnie Stevens: I would love to collaborate with Justin Beiber. I know that might sound surprising but I'm loving his latest music and would love to do a song with him, he works with all my favourite producers and I think it would be a lot of fun.

Prinnie Stevens: My biggest message in my music is to not feel pressured by the stereotypes that surround you. Sometimes we feel like people assume were going to end up a certain kind of way because of the way we look, or where were from or maybe who your parents are. You are creating your destiny everyday with the choices you make. You can do absolutely anything you want, and be whoever you want to be, no matter where you came from or who you are.