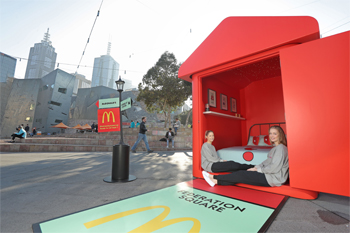 Australia's first real-life Macca's Monopoly Hotel has come to Melbourne and two of the nation's biggest Macca's fans have been its exclusive guests for one night.

Inspired by the tiny house movement, which has seen people all over the world downsize their homes and hotels to prove happiness can come in small packages, the Monopoly game piece from one of our favourite childhood games came to life in Federation Square overnight.

The unique Monopoly Hotel, measuring just 2.4m x 3m, is one of the smallest hotels in the world and immersed its guests in nostalgia, with its game board-themed interior - even Mr Monopoly became their concierge for a night!

Built to celebrate the return of the Monopoly Game at Macca's and to launch the new interactive game app – a global first - Macca's super-fans Laura Paton and Emma Kendrick were lucky enough to win a night's stay to mark the occasion, and were the first people in the country to wake up and win instantly.

Laura said: 'We've often joked about moving into a Macca's every year the Monopoly Game returns to try and win as many times as possible, but this is even better. It's not often you get to say that you woke up in a giant game piece!

'We're such big fans of Macca's and Monopoly and we certainly feel like we've been given the V.I.P. treatment with the exclusive stay and of course, being the first people in the country to play – it's been unreal!"

Jenni Dill, Chief Marketing Officer, McDonald's Australia, said: 'Monopoly is one of those quintessential family board games, we've all got fond memories of playing it so we wanted to bring it to life in a unique way to launch this year's Monopoly Game at Macca's. It may be one of the tiniest hotels in the world but hopefully one of the most memorable for Laura and Emma."

This year, Monopoly players will have a one in five chance of winning instantly from a pool of more than 30 million prizes up for grabs, including cars, holidays, cash and McDonald's food prizes.  Plus, the new -Chance Card' ticket will give players another opportunity to win even more prizes the App.

'The majority of us are smart phone users so we wanted to create an enhanced game experience – we're really excited with how the app takes the game to another level by allowing customers to win more prizes, even when they're not in a restaurant." adds Jenni.

Monopoly at Macca's is available to play now at all McDonald's restaurants the country. Visit maccasplay.com.au for more information.