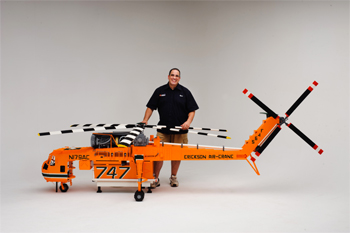 Brickman Experience, Australia's largest LEGO® exhibition made entirely from LEGO® bricks is back by public demand and is heading to Hobart these school holidays.

Following sell-out tours in Melbourne, Sydney, Brisbane, Perth and Auckland, the exhibition will be in Hobart for 13 days only with Ryan's remarkable collection of 60 LEGO® works.

This world-class exhibition features the complete collection by Ryan McNaught, including sixty original works made up from over 5 million LEGO® bricks! Each model is presented with its own unique behind the scenes story. The works include Ryan's biggest ever Star Wars LEGO® build, a model Airbus A380, a quarter scale LEGO® Ferrari and the world's largest LEGO® flower.

In addition to Ryan's pieces, works from other LEGO® Certified Professionals will be displayed, based around the -Transport' theme from their native country – a must see for all LEGO® fans. The exhibition will also feature interactive builder zones.

'I am really excited that the Brickman Experience is heading to Hobart. We've had huge success with the exhibition across Australia and New Zealand so it was only a matter of time before we brought the exhibition to Tasmania! The Brickman Experience brings together all of my works in one place for people to enjoy – but they won't be on display for long – only 13 days!" said Ryan McNaught.

Ryan adds, 'LEGO® brings people together, everyone loves it - kids, parents, grandparents, everyone has a memory of playing with LEGO® and I'm looking forward to sharing my creations with LEGO® fans in Hobart and meeting all the budding brickies out there!

'I've also got a few exciting things for the kids (and big kids!) to participate in, so everyone can enjoy creating brick masterpieces as well as enjoying the exhibition. It's going to be heaps of fun!"

LEGO® bricks play a cherished role in childhoods across the globe – the beloved plastic bricks have been around for over 50 years! Back in 2010, Ryan took his love for LEGO® to a whole new level by becoming the only LEGO® Certified Professional in the Southern Hemisphere – he now goes by the name of -The Brickman'.

Proud to be one of only 14 LEGO® Certified Professionals in the world, and the only one in the Southern Hemisphere, Ryan -The Brickman' McNaught used to be a slave to the corporate world before trading in the boardroom for a LEGO® workshop! Traditionally, Ryan's internationally awarded works are the domain of the toy section in department stores but for the first time you can see them all together in the one place.

Married with twin sons and based in Melbourne, Ryan's greatest concern is that there are a whole lot of eight year olds out there who want to bump him off to take his job!