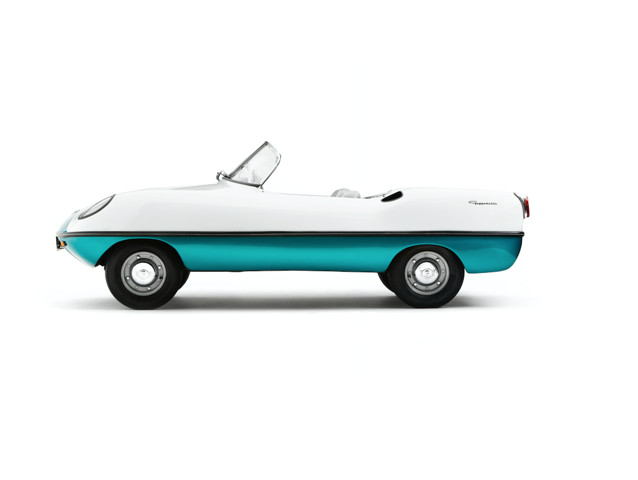 The Powerhouse has announced details for Microcars, opening on 5 November 2021.

Microcars will present 17 cars manufactured across Europe, Japan, the UK and Australia, charting the rise of the small automobiles in the late 1940s and examining the resurgence of contemporary hybrid microcars today.

The phenomenon of microcars began in the years following WWII, in factories in Germany and Italy which previously made military aircraft. These factories re-tooled to make automobiles which were more economical and available to the masses, appealing to a renewed need for transportation and freedom to travel. Combining motor scooter engines and small, lightweight bodies, the microcars popularity extended across Europe, with commercial models by manufacturers including Messerschmitt, BMW, Heinkel and Lambretta.

The aesthetic design of the microcar, nicknamed the bubble car, soon spread across the world and in the late 1950s Australian engineers began to create their own versions. The most notable of these are those produced by Sydney-based manufacturer Buckle Motors and South Australia engineer and entrepreneur Harold Lightburn.

The exhibition will feature microcars from the Powerhouse Collection and loans from notable Australian collectors. Highlights on display include the Messerschmitt KR200, created by the German aircraft manufacturer in 1955. Labelled "Kabinenroller" translating to Cabin Scooter the design was inspired by a fighter aircraft cockpit and the model ignited the attention for microcars overseas. American musician Elvis Presley famously purchased a KR200, with the car on display in the exhibition used in Baz Luhrmann's forthcoming Elvis biopic.

The Zeta Runabout, one of less than 400 ever made by Lightburn and Co, a company known for wheelbarrows and washing machines.

Contemporary electric and hybrid microcars including the Renault Twizy and Mercedes Benz Smartcar will also be exhibited, highlighting a recent resurgence of the microcars in Europe as a sustainable alternative to large petrol engine vehicles.

Curator of Microcars, Damian McDonald said: "Following the hardship of the second World War, there was a real desire to travel in Europe but the difficult economic conditions meant there wasn't an appetite for larger cars. Microcars were a result of this necessity but their appealing (albeit arguably cramped) aesthetic soon caught the attention of engineers around the world. The phenomenon was unfortunately relatively short-lived, impacted by the introduction of the popular Mini Cooper in the market. The introduction of the Smartcar in Europe has seen a renewed interest in the tiny automobiles, particularly in urban cities, and points to a future of travel which is more sustainable."

Powerhouse, Chief Executive Lisa Havilah said: "The iconic and innovative design of the Microcars has led them to become treasured artefacts amongst collectors and museums, with many of the models now rarely seen in public. This exhibition provides insights into this important transport history while also looking to the future of automobile design."

Designer of the Goggomobil Dart, Bill Buckle said: "I went to the Earl's Court Motor Show in England, where there were a couple of fibreglass bodied cars and I came back home, researched as much about fibreglass bodies as I could, and thought it was a feasible proposition to use this method to build a cheaper car for Australians. I then negotiated a deal in Bavaria with Hans Glas and his son to import the necessary mechanical parts to assemble the Goggomobil platform chassis in our Punchbowl factory, fitting locally made, one piece lightweight fibreglass bodies. I am always surprised at the special interest shown by the public in these little oddities, designed to provide inexpensive transport, and it is thrilling to see the Powerhouse displaying these microcars from sixty-odd years ago."