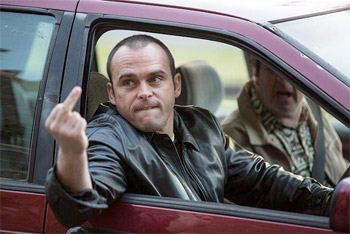 Question: How does it feel to be portraying Jason Moran again? Are you approaching the role any differently this time around?

Les Hill: Playing Jason Moran again hasn't really brought any changes for me as far as character goes. It's pretty much revisiting the same person – I'm not going to change anything. From my understanding of the character, there was enough of an accurate portrayal, in a dramatised sense, the first time around, so I'm basically walking the same sort of line. I had a pretty good time researching him for the first series of Underbelly, which I watched again to touch base, physically speaking, with some of the idiosyncrasies of the character. But other than that, there was no real need to change anything. He already existed in my head, albeit in a dark corner, for a little while.


Question: Since last portraying Jason, you have portrayed characters on the other side of the law, do you have a preference, and if so why?

Les Hill: Since first portraying Jason, I've had the opportunity to portray many different characters. I don't really have a preference for which side of the law that a character is on - it's more about the depth and arc of their story and obviously the people that I'm working with on each project as well. I think that some of the challenges faced by people who are positioned on the wrong side of the law, can provide some interesting stories, but having said that, if you're playing what they call the archetypical hero, than that's an interesting journey to walk as well. So for me, there's no preference as to whether a character is on the wrong or right side of the law, as long as there is an interesting tale to be told.


Question: Have you had to make any physical changes in order to portray Jason?

Les Hill: Not really, as I try to keep myself in reasonably good shape. I do a lot of sport plus strength and conditioning training twice a week with a select group of fight trainers. So this is just me - there's no particular need for me to change – at least not for this role.


Question: How are you enjoying working with Jake Ryan who portrays your on-screen brother, Mark Moran?

Les Hill: Callan Mulvey, who portrayed Mark last time, has big shoes to fill, but Jake Ryan has brought good weight to the role - he's done a cracking job. As far as the onscreen relationship goes, we have a pretty good rapport off-screen too which I think will reflect in the relationship as it's portrayed on-screen. There's not a great deal of work for us to do this together, but the scenes that we have done show that we do gel as people and I think that will come across.


Question: What was your initial reaction when you were asked to portray Jason again?

Les Hill: Initially I was unsure as to how they were going to -bring him back from the dead', so I waited to speak with the writers and the producers. Peter Gawler called me and we chatted about what they were hoping to do with Jason as well as the other characters, including who else was coming back for this brand-new series. Then I waited to read the scripts so that I could see where they were heading. It's interesting, as there's not a great deal of work for the character this time around but it's good to return and, in particular, work with some great performers again. I think that Tony Mokbel's story is worth telling, so I'm enjoying being part of that.


Question: How do you -let go' of your character after a heavy day's filming?

Les Hill: I've never really had an issue with clearing my head after anything intense. I've got a very definitive line between reality and what I do at work, so for me, when I walk off set, that's it – I suppose the term is -data dump.' I get rid of it - it's finished – there's no point in carrying that stuff around with you. I think it's probably a little unhealthy if you can't let go, as it's just a job.


Question: What are you enjoying most about working on this series?

Les Hill: To be honest, it's being able to work again with some great people. We've got some terrific directors back, such as Peter Andrikidis, and we're working with the same production company, Screentime. It's also good to catch-up with Gyton Grantley, Simon Westaway, Kevin Harrington, Gerard Kennedy and Robert Mammone, whom, for a whole bunch of reasons, I didn't get to work with much during series one of Underbelly. It's also good to be working again with Madeleine West with whom I've acted alongside on a number of jobs, including RESCUE: SPECIAL OPS where she played my love interest. It's great to see her again as she's always a barrel of fun.


Question: Why do you think audiences are drawn to dramatised true crime stories?

Les Hill: I have a theory that it's not just dramatised true crime drama, but true crime. People want to see people living outside of the law as they can visit those lives without having to get their own hands dirty. But I certainly believe that fictional crime stories, as long as they're portrayed with reality, will carry just as much weight with audiences. I don't necessarily think that dramatised true crime is what it's about. I feel that it's about interesting characters and stories and I think that's what it has always been and the way it's always going to be. 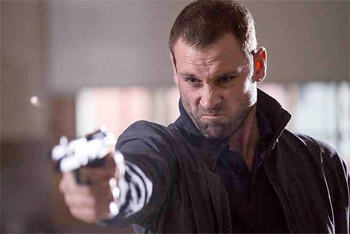 Question: What research did you undertake in order to prepare for your role?

Jake Ryan: Because of the lack of information actually available on Mark, I did read a lot about the overall events of the time and the Morans as a whole. I also read the Judy Moran autobiography but I deliberately didn't watch the first series of Underbelly as I didn't want my performance to be swayed by what I saw Cal Mulvey doing. I'm a big fan of Cal's, but I thought it best to keep it my own. So it was really just a matter of familiarising myself with the events of those times. I just let it evolve from there and allowed the character to emerge as I thought he would be.


Question: Did you have to do any physical preparation for the role?

Jake Ryan: I lost nearly ten kilos. I'd put on that weight for a previous role but as Mark, from what I've read, was something of a fitness fanatic who liked to keep strong and healthy, I needed to start training and at least try and get half fit! For a couple of months, it was a pretty big focus.


Question: How have you enjoyed working with Les Hill who plays your on-screen brother, Jason Moran?

Jake Ryan: Les has been great – in fact, everyone has. In replacing somebody else, I wasn't sure what the dynamic would be like, but everyone has been terrific and Les has been wonderful. Les is such a professional and his knowledge of cameras and angles is amazing - he knows as much as a Director of Photography. And he's been very giving, as thanks to his army training background he's helped me every time we've had to fire or hold a gun, as I had no idea! He's been a good brother!


Question: How do you clear your head after an intense day of filming?


Question: How have you enjoyed working with Debra Byrne who plays your on-screen mother, Judy Moran?

Jake Ryan: Deb's great! I've got a bit of a crush on Deb, but in a nice way! She's such a sweetheart and we've spent a lot of time just chatting about everything but acting! She's a lovely, lovely lady. Growing-up, she was a familiar face, so to now be playing her son has been terrific. She has such a lovely presence that it's been like having a mum on set the whole time who's looking after you. She's gorgeous.


Question: How do you think that audiences are going to react to FAT TONY & CO.?

Jake Ryan: When people speak about the Underbelly franchise they always refer to the first series, which featured several of these characters. And even though this show is a brand-new series that's not part of the Underbelly franchise, I think that people will be -over the moon' to see actors like Robert, Les and Vince working together again - and as Alphonse Gangitano, Vince Colosimo is just electric. And it's also interesting to revisit facets of that story which this time told are being told through somebody else's eyes, because, I suppose, it's so subjective. Nobody really knows what the truth is. And because of everything that has happened since then, such as the death of Carl Williams and Tony Mokbel's capture, it's another massive chapter that has emerged that I think people will be fascinated by. 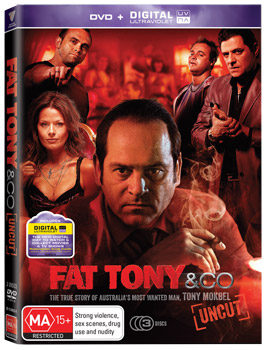 The story of Australia's most wanted drug dealer and his eventual capture in Athens.

The Victorian and Federal police undertook a marathon attempt to bring him to justice, spanning countless...