Melbourne based duo LEFKADA (stylised LEFKΛΔΛ), consisting of Tim Cox & Selene Messinis, have steadily made a name themselves over the past couple of years, crafting a new space in electronic music with their forward thinking singles 'Dead Lines', 'Lungs' and 'Ella's Flowers'. Now the producer-drummer and songwriter-keyboardist pair deliver a magnetic commentary on influencers and social media with the release of their new single 'The Curator'.

The pair set the tone from the outset, creating an upbeat groove with bass driven synth stabs, 808 claps, a bright electronic breakdown, all topped off by Selene's demanding vocals - all elements coming together to produce a standout electro-pop anthem.

Detailing the inspiration behind the record LEFKADA share, "'The Curator' is inspired by our fascination with "influencers"; we're always wondering what their lives are truly like behind the veil of social media. Online, they meticulously curate their personal brand and image, so that their lives appear in perfect snapshot moments, which are usually never as perfect as they seem…"

With a background in jazz, R&B and hip-hop, LEFKADA draw from various experiences as a duo, and in their respective solo projects, having performed and written for some of Australia's most hyped acts, including Woodes, and Melbourne collective NO ZU. With over 100k streams across their catalogue to date, and a plethora of support from triple j, triple j Unearthed, Fresh 92.7, 4ZZZ, RTR FM and more, LEFKADA are proving to be the newcomers to keep a firm eye on in 2021.

Lefkada: Our music is punchy and unapologetic, but the main thing we want is for people to be dancing along whilst hearing meaningful lyrics. The sound of The Curator is very bouncy electro-pop with elements of future bass; but across our writing/production, our influences vary from house to hip-hop to anything!


Question: Can you tell us about The Curator?

Lefkada: The Curator was written about our love/hate relationship with social media and "influencers". We are fascinated by the lives that are so perfectly 'curated' to appear a certain way, when in reality, they're often far from it. I guess the tune has been written to mock the fabricated, "perfect world" on screen, and the lack of substance/authenticity we sometimes see.

Lefkada: We are very politically driven, and The Curator is no exception. It is a satirical commentary of the way we use social media to manipulate an image of ourselves, and on a larger scale, spread fake news.

Lefkada: Definitely performing live, we've both come from a live performance + improv background, so we feel very comfortable on stage. We also have a long history of playing together, so I guess that's also why performing is a comfortable space for us!

Lefkada: Lefkada is an island in Greece, and it's where my dad is from :) 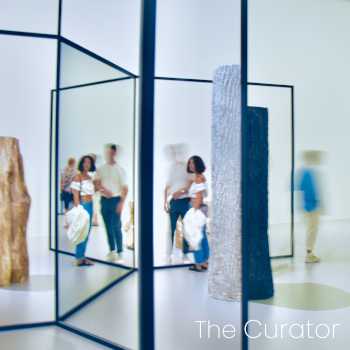 Lefkada: We've been performing music together in some form for many, maaany years. LEFKADA came about from us realising a shared love for this kind of music that neither of us had written before.

Lefkada: We consume a lot of news and political content, so usually it's bigger issues that are going on in the world at that moment that inspire us; we can then tie these ideas to things within our lives.

Lefkada: We went to a great high school that fostered our love of music, and it was probably seeing the teachers we admired so much (and past alumni) also killing it in the scene that made it possible for us to imagine going on with music at tertiary level and beyond.

Lefkada: Probably the opportunities we've had to perform overseas, seeing new places is one of the best parts of touring!

Lefkada: We really love performing in all contexts but it's really special to hone in and focus our skills to writing music we're really passionate about at the moment, and seeing the evolution of our tastes growing and changing together over the years has been great. We also love being able to have a platform to voice our views on the world we live in - artists with free speech are very fortunate and powerful.

Lefkada: It's a cliche, but it truly feels surreal to hear the music you've spent hours/months/years on played in a public setting for anyone to hear.

Lefkada: There isn't really a typical day; we work mainly from our home studio (at all unconventional hours) either writing/producing our own music, or working on other artists' music (session playing/producing). When we're not working, we're either trying to be fit, playing video games, taking care of our plant babies or cooking up something wacky!

Lefkada: We're going to get The Curator into as many people's ears as possible, and then hopefully we'll be back on stage very very soon, stay tuned for news on that!
And there's always new music brewing too