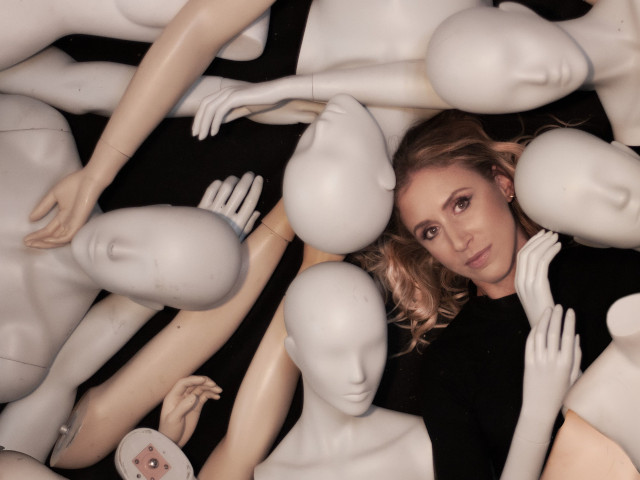 There are many ways to describe the ever talented South African born, New Zealand based singer-songwriter Lee Martin; captivating, though-provoking and versatile are just a few that immediately come to mind. On her second full length release, Lee captures all of this and even more with the release of "Gypsy Soul". The Sophomore album from Lee Martin is an incredibly personal collection of work that is simply delicious.

The album was mostly recorded at Redroom Studios in Auckland, New Zealand with the help of recording engineer Brendan Zwaan and co-production credits from Chris Ward and TeMatera Smith. Mixing was also provided by Smith and mastering was provided by Chris Chetland at Kog Studio.

Additional Backing vocals recorded and arranged in South Africa, adding layers of stunning texture which grounds the album in Lee's African heritage whilst still paying homage to Southern US Layered harmonies in a Soul and even gospel style. These vocals were recorded and produced by RJ Benjamin.

Describing what she would like for her audience to take from the album, Lee says "I write about real life events and feelings, the dream of course is for the listener to resonate with the stories and also appreciate the cultural fusion of sounds that we brought to the album going back to my African roots."

Lee has a unique and versatile writing style which allows her to cross genres as she glides easily between Adult/Contemporary, Soul, Country, Folk, and blues all the while maintaining her unique sound. This is perfectly displayed within "Gypsy Soul" as it encapsulates what could very well be one of the best releases in 2022.

Lee Martin: I think some of my previous work would have been strongly placed in the "Folk" genre, but with the new album, we drew a lot of inspiration from Motown, taking a bit of a country/soul approach. In one of my albums reviews it was described as follows:

"likely to be associated with Memphis, Nashville and Muscle Shoals, with a healthy input of Chicago blues. Think Dusty In Memphis with a blues vamp" Marty Duda, 13th Floor


Question: Can you tell us about Gypsy Soul?

Lee Martin: Gypsy Soul is an incredibly personal body of work and I am so proud of the end product. I love every single song on the album and have a really strong connection to each song. Being in the studio is my absolute happy place and working with producers TeMatera and Chris Ward has been such an honour as they took the songs and shaped them into a soulful direction. We called on the big guns with some of NZ's best musicians to come to play on my album we really pushed ourselves to deliver the best no matter what it took: it still blows my mind when I listen to the tracks and how far they have come from start to finish. We started drawing on Motown influences and somewhere in the process, we had the great idea of incorporating gospel voices for the backing vocals. This led to the next brilliant idea, to go back to my African roots and have it done in South Africa at Jazzworx studios in Johannesburg. This made the songs come alive even more, with a soulful, bluesy feel, all the while incorporating those authentic African sounds.

Lee Martin: I just want people to be able to relate to the music and make it their own. I also really hope that the absolute heart and soul that was poured into the songs will convey themselves.

Lee Martin: This is probably the hardest question! Ha-ha! It's like two completely different experiences. When you are in the studio, everyone's creative juices are flowing and there is this synergy happening where you are creating something brand new. It's an insane feeling when you listen to the end product and go, we made that where once there was nothing!

I can't choose, I love both processes so much.

Lee Martin: I am a big storyteller! I love telling people the backstories of songs and no matter how sad or upbeat a song might be, I love throwing in a bit of impromptu comedy in between if the opportunity presents itself.

Lee Martin: What a question, this made me scratch my head a lot! My first thought would be one of my musical heroes like Van Morrison, but then I think, oh the pressure! Or my music-loving Grandfather who is no longer with us, but what a cliché. At this stage, having not seen my parents in so long because they live in South Africa and haven't seen me perform in more than 10 years, I have to say, that would probably be a dream come true!

Lee Martin: It's usually a feeling I get or an emotion that is trying to escape. I never force songwriting and I would never try to attempt writing a song if I don't get that feeling or inspiration. I have tried this before and it usually doesn't produce a very good result. I have heard other musicians describe it before too, but it really does feel like something else takes over and after about 5 to 20 minutes there is a brand-new song and you can't believe you just wrote it!

Lee Martin: I think it is just one of those things that kept pursuing me, it was never really my plan to be a full-time musician. We started a band when I was at Uni, and then life just always kept pulling me in the direction of music, when other doors closed, the music door would be wide open. It's definitely not an easy road but it has always had a really strong pull on me.

Lee Martin: Oh, my goodness! So many times! In fact, one of these contemplations happened quite recently. It's such an arbitrary career and there is no real blueprint or tangible measurement of success. It also feels at times like you give every ounce of your being without any real progress. I remember not too long ago breaking down in tears saying, I just need one little win, that's all, just one for me to get back up. I've just had enough of all the hard yards and felt like I was getting nowhere. Luckily, I stopped the pity party and got back up again.

Lee Martin: Creating and performing music is my favourite part, but I have also learned a lot about myself and about the industry during the process. There's nothing quite like the music industry to teach you resilience.

Lee Martin: This depends on the day of the week ha-ha!

I'm on a musician's sleep cycle, late nights = later mornings. Although I now have a young family so late mornings translate to 7:30 am regardless of what time I might have snuck in after a show. Mondays to Wednesdays is very "normal" admin-based. I always do yoga, might go for a run and then I just get stuff done. This could be anything from housework to writing new songs. I never force myself to write songs though but when the inspiration hits, I will make sure that I sit down and get it out on paper and record it for reference. My 2 boys get back from school at 3 pm so then I always spend time with them, cook dinner, things like that.

Thursdays to Sundays are a different story as I almost always have shows. My husband is incredible support when it comes to that and my family has never known it to be any other way, it's just what I do for a job and it happens to be over weekends. I think we have a good thing going and we make it work.

Lee Martin: Next, I'm off on tour to promote this album. First New Zealand, then I'm hoping to add some dates in South Africa in July and then Australia in September.

I also have a massive catalogue of unrecorded new songs that I am dying to record so hopefully, we can start on the next album before the end of the year.