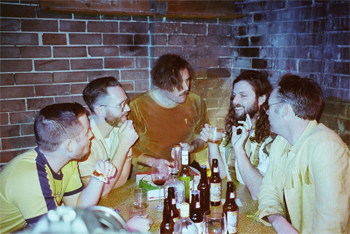 Cinematic alt-folk group, Lazy Colts have today announced the release of their brooding new single, Twenty Two, the second taste of their debut LP, Trojan, set for release on August 5. They'll be hitting the road in August to celebrate the new LP, kicking off in Melbourne on August 6 and moving on to Canberra, Brisbane, Sydney then wrapping up in Katoomba on September 4.

Twenty Two is a reverent and reflective ode to youth and the naivety that dictates the relationships formed during that time. Emphasised by the pulse of young blood that dictates the arc of the song, the organic nature of the drums, piano and violin resonate under lead singer Lacey Cole's effortless vocals. Acoustic and raw, Twenty Two encompasses country and folk influences to illicit a rich blend of sound that is lush and satisfying. Of the single, Cole remarks, 'Essentially, Twenty Two is about the grand -undying' sentiments that hallmark your first cracks at a serious relationship. It's about perspective, initially, the lack of it, and then the revelation that the reason you're in your situation – however great or bad it is – is also the reason you will get through it: you're only 22 years old."

Directed by Sarah Adamson (The Preatures, Gideon Benson, Matt Corby), the video clip for Twenty Two is a filmic representation of both the vulnerablilty and the joy of being young. Starring Sydney-based model Evelina Milward, the film seeks to balance the song's morose male dialogue with a feminine depiction of happiness and beauty. The tone is both nostalgic and immediate; an authentic depiction of youth's resilience and wonder. Speaking about the clip, director Sarah Adamson says, 'I saw this great opportunity to lovingly poke fun at the sincerity of the song. I had this picture in my head of a girl listening to this love song some boy had written her but not really caring as much as he thought she would. She's doing all these other funny and weird things a 22 year old girl might do when bored at home by herself. She is only 22. She knows there's nothing to really worry about."

Lazy Colts' debut album, Trojan is a fine example of the state of Australian songwriting. Broad, triumphant, and satisfying, yet devastating, emotive and raw, the group have put a mirror to the human experience and Trojan is the result. Mixed by renowned engineer, Mark Lawson (Arcade Fire, Timber Timbre), the release has been two years in the making and calls upon a variety of influences including The National, Nick Cave and Bruce Springsteen. Recorded in part inside a local church, Cole reflects on the process, 'I'm not sure the songs would sound the same if they were written and performed in a living room or garage. There is definitely a reverence or awareness of the space and the mood the empty church sets which lives on in the album...Trojan is set against grand backdrops of religion, myth, violence and politics, but the songs themselves are more personal, focusing on relationships and the fleeting moments between people."

Lazy Colts will be hitting the road on a national tour in August to celebrate the release of Trojan. Giving fans a taste of what to expect from the shows, Cole enthuses, 'Audiences can expect energy, passion, dynamic arrangements and musicianship. The rest of the band bring an element of sophistication and skill which strikes a nice balance with my more unhinged vibe. All in all, it's a good time, it's like rays of light through storm clouds."

Lazy Colts: Twenty Two is inspired by the first relationship you have when you're young that feels like the real deal. Everything feels very dramatic and romantic and when it doesn't pan out for you like the movies said it would you try and force it there with sheer conviction until you realise there is probably a better way to spend your time than standing outside your girlfriend's in the rain at midnight sending text messages and crying and trying not to wake her parents.


Question: Can you tell us about filming the video for Twenty Two?

Lazy Colts: Sarah Adamson had the idea to shoot a video of a young girl hanging out, bored at home and the very next day she was doing it. We used our friend's house because it had a great naturally lit kitchen and Sarah cast the NZ model Evelina Milward as the main character - she has a great look and personality that fit the mood of the video and the song perfectly. From what I understand Sarah, Evelina and hair and makeup artist Samantha Patrikopoulos listened to Drake all day and Evelina just did every weird thing they could think of…


Question: What was it like working with Mark Lawson?

Lazy Colts: Working with Mark was amazing. He has mixed and recorded some of our favourite albums so it was really exciting for us to work with one of our hero engineers. We did all our work together back and forth over emails and file transfers and he really brought a texture and a quality to the songs that gave them a new life. It would have been a very different sounding record without him that's for sure.


Question: What can we expect from the upcoming tour?

Lazy Colts: A lot of fun. Our live show is packed with energy and some great surprises that make for a really good time. We're really excited about bringing our music to fresh ears.

Lazy Colts: Loads and loads! The music industry is always changing and you can see that when even the most established artists look to find new ways to reach their audience weekly. There is no set way to break into it and the journey looks different for everyone depending on what kind of vibe they are going for. We are always surprised by what the industry is like but have learned to just focus on what it is that we do best so not to get too freaked out by all the things we can't control.

Lazy Colts: I normally write the lyrics and vocal melodies over pretty basic chord progressions and then bring it to the band who develop arrangements and moods and rhythms that can sometimes change the song so much that the only thing which seems the same in the end is the lyrics. It's a pretty fun way to work as you get to hear your own song anew which is sometimes great and sometimes a little difficult.

Other artists definitely inspire us, both friends' bands and music legends. Movies are becoming a bigger influence on not only the sound but the imagery in our songs. We all listen to really different stuff so a huge inspiration ends up being what everybody brings to the rehearsal room. Lots of different influences and ideas collide there and we get most excited about what that begins to sound like.

Lazy Colts: Next is the album released on August 5 followed straight away by our national tour.

Lazy Colts: I feel like I will always play music so I don't really have a towel to throw in as far as that's concerned. It's kinda like therapy for me to write songs and sing them so giving up isn't really an option. As far as the band and recording and touring is concerned I think we are all at a place where we want to give it a good crack and see if we can reach a wider audience but its not the be all end all for us. We love playing music together and we love the music we play s as long as we're in the same country we will probably be doing it in one form or another.

Lazy Colts: I love them both. Performing live feels more natural and spontaneous when I'm a bit of a notorious 'over thinker" when the tape is rolling so perhaps playing live is where its at..

Lazy Colts: In high school I loved punk music so maybe a band like Rancid. I really liked Ben Harper after the punk thing so he must be pretty integral in getting me writing emotional love songs and playing them for people.

Lazy Colts: There's always challenges and successes in music. They're both pretty subjective ideas. You can earn a lot of money playing music as a cover band but I personally wouldn't find that as rewarding as playing our own songs for half as much cash. I feel like we've succeeded in writing and recording a great album. The challenge for all artists is finding their audience. A great place to start is music that you are convinced by. If you don't believe in what you're doing to begin with finding any kind of success is gonna be a struggle.

Lazy Colts: For me my day consists of walking the dog, going to my day job, coming home sometimes to rehearsals, or a gig, or some band admin and squeezing in time with my sweet babe and friends wherever I can. I also try and run during the week and play soccer on Saturdays. Keep on movin.

Lazy Colts: Music is a wonderful thing. It's just great to be part of it, to contribute to it and to enjoy it with great people.