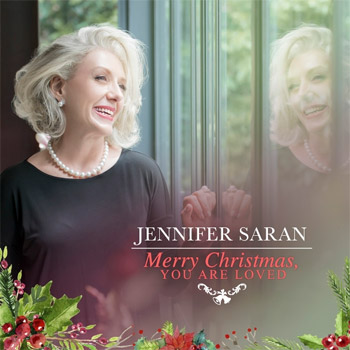 Jennifer Saran is a North American alt-pop/adult contemporary artist, songwriter and vocalist based in Hong Kong. Her first full-length album Merry Christmas, You Are Loved, will be available both digitally and physically worldwide with its release on November 20th, 2015. This album was created with legendary producer Narada Michael Walden, and is being released through his label Tarpan Records.

Since she was a young child, Jennifer has loved Christmas, and when she had the opportunity to work with one of the most lauded producers in modern recorded music, she jumped at the chance to create and release a modern Christmas album. Jennifer says: 'Since meeting Narada Michael Walden I have been constantly inspired to write lyrics. Sitting in a pool in Thailand I was thinking about people I love that are no longer with me, or may not be able to be with me, and I wrote about it. I sent it to Narada with a 'what do you think?' He loved it. I called the song 'You Are Loved'.  He wrote a melody around it and we talked for a few days. And it hit me that my first full-length album 'Walk With Me' was not going to be released until after the first of the year, why not make it a Christmas Song. I messaged Narada and said, 'Hey, why not make it a Christmas song?' He said, 'Cool! I love Christmas!' So we called the song, 'Merry Christmas, You Are Loved' and now it's a whole Christmas album."
The album is a contemporary mix of brand new originals penned by Jennifer and Narada, as well as some very well chosen covers, all of which revolve around the central themes of love and family and the winter holidays. Musically, the album spans ballads to up-tempo grooves, including some swing and gospel influences as well. This album is a perfect complement to a family holiday dinner, or holiday radio shows all over the world. It features a handful of traditional Christmas songs like Oh Come Oh Ye Faithful, O Holy Night, and Hark The Herald Angels Sing to more modern covers of The Carpenters' Merry Christmas Darling and the classic Baby It's Cold Outside.
Narada enlisted some amazing musicians and performers for his band on Merry Christmas, You Are Loved including: Frank Martin (Angela Bofil, John Handy Band, Tuck & Patti, Jose' Neto, Airto & Flora, Sting & Trudie's Rainforest Band) on Keyboards, Angeline Saris (Gretchen Menn, Zepparella, Ernest Ranglin) on Bass and Vocals, Matthew Charles Heulitt (Zigaboo Modaliste) and Jose' Neto on Guitars. Additional Backing Vocals on this album include vocalists Nate Soul Sanger and Cornell Carter. All of the strings were arranged and conducted by Minna Choi of Magik*Magik Orchestra.
Jennifer Saran, aka Jennifer Hill, was born in Washington DC to a Canadian mother and American father. It was at the local Episcopal Church while at school in Villars, Switzerland, where she first realized how much she loved to sing, performing Handel's Messiah a cappella. Jennifer went on to attend high school in Alexandria, Egypt, where she performed in school plays and learned to speak Arabic. She then attended The American University in Cairo, earning a Bachelors Degree in Political Science. Throughout her years growing up in Egypt she and her friends always followed the local Egyptian live bands that performed American and British pop music, dreaming one day of being a singer.
She went through a long dry spell away from music – raising children, working in various corporate roles, singing in the shower or car, rarely having any time to go out dancing. She was moved to Philippines for an international corporate role for 2 years, followed by Singapore for another 2 years, and then to Hong Kong where she has lived for the past 24 years.
Her debut full-length album Walk With Me was recorded and produced entirely at Tarpan Studios in San Rafael, California, by legendary producer Narada Michael Walden and will be released in March of 2016. Narada has produced music royalty like Whitney Houston, Mariah Carey and Aretha Franklin. With Narada's music and Jennifer's lyrics and vocals, they have created a tremendous debut album that is sure to captivate a worldwide audience.
For Music Samples or to pre-order Merry Christmas, You Are Loved visit: https://tarpanrecords.bandcamp.com/album/merry-christmas-you-are-loved
Check out Jennifer's website for more information: http://www.jennifersaran.com