In his native Australia, singer songwriter Jacob Butler is moments away from being a household name. With blistering live performances ranging from beer stained pubs, to the iconic Sydney Opera House, to national television appearances watched by millions, Jacob is no stranger to the big or small stage. A 21st century love child of John Lennon and Elvis Costello, Jacob has forced his way into view.

A 2005 top five finalist in The X Factor Australia and a 2007 top eight finalist in Australian Idol, Jacob should not to be mistaken for a pop star wannabe…

Independently releasing his debut EP Coma in 2009, under his own label Lions Share Recordings, the single peaked at number nine on the AIR Australian Charts, with many in the industry citing a Neil Finn quality to Jacob's songwriting. Coma was played on over 100 radio stations nationally and featured on a network television promo for Neighbours - Australia's longest running television series that screens in over 65 countries around the world. Featuring Neighbours stars Pippa Black and Sweeney Young in the video clip, Coma generated extensive Australian media coverage.

In 2010, Jacob received global recognition as a finalist in the International Independent Songwriters Contest while back in Australia; he earned a nomination in the annual Musicoz Awards.

2011 has seen Jacob venture back into the studio with producer Richard Stolz (Bodyjar, After The Fall, Kanye West) to record his debut full-length album entitled, Reason. The result is a stunning blend of trans-Atlantic guitar driven power pop with post-grunge sprinklings, highlighting Jacob's depth of ability as a songwriter. This self-financed debut is nothing short of world class, and is a testament to Jacob's single-minded focus and determination.

Halfway into 2012 and Jacob has already signed deals in Germany, Switzerland and Austria (Very Us) Poland and Bulgaria (Universal) Greece and Cyprus (EMI) Scandinavia (Billberg) and South Africa (Gresham Co), as well as a European publishing deal with AMV Talpa. Jacob was also recently announced as a finalist in the International Songwriting Competition - the world's biggest and most prestigious annual songwriting awards, and has signed a global content deal with Billabong and Sony Mobile.

Jacob has also secured a national sync deal with Australian theme parks Warner Brothers Movie World, Sea World and Wet n' Wild which will see his track 'Come My Way' on a year long TVC campaign. With scheduled promotion and shows throughout continental Europe during September and October 2012, it looks like Jacob is moments away from being a household name in Europe as well! 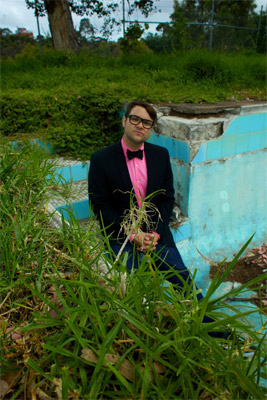 Question: How does it feel to sign with Billberg Entertainment and many other international deals?

Jacob Butler: It feels great! I have been working towards this for quite a while so it's a really nice feeling.

It certainly doesn't mean that I have "made it" though - the hard work is only beginning now, but it's fantastic to have the opportunity to get my music out to a wider global audience.

Jacob Butler: UKOK? is basically about my experiences of being incredibly homesick in London some years ago. I packed up everything in Australia and moved over there thinking that it would be really easy. I was chewed up and spat out in a matter of months and was on the next plane home with my tail between my legs.


Question: How was you describe UKOK?

Jacob Butler: UKOK? is a pretty upbeat and anthemic rock number, it's stacked with big guitars and drums, and it's a killer son to play live - one of my favourites actually.


Question: Can you talk about filming and directing the video for UKOK?

Jacob Butler: The idea for the UKOK? video was always to shoot in London for obvious reasons. When the German label VERY US Records came onboard, there was a little bit of budget available for the video - so I booked a flight and made it happen. I have my own camera, but I got in touch with a young and very talented director of photography by the name of Scott Peters, he was keen and it was a very collaborative process. I'm always thinking of concepts for music videos and I always have a strong vision for these, so directing is just the natural extension of that.

It was a pretty intense shoot - we had two days to get it done, and as you can see we had a multitude of locations to cover as well. Plus we were lugging around all the equipment and a guitar that I rented that was housed in what felt like a 25kg flight case! After half a day of carting it around on the tube I decided that it would be far easier using the Black London Cab's - those guys were a godsend! Those guys are the best thing about London, I reckon!


Question: How has your approach to music changed since X Factor?

Jacob Butler: I think that I have learned a hell of a lot about the recording process since that time, and how important that it is to have the best recording that you can afford. Everybody these days thinks that they can make great albums in their bedrooms on their laptop, and that's great for people like Gotye and Skrillex who are into sample based music and are incredibly talented in that field. But they are exceptions to the rule - I'm still all about using a professional engineer in a professional studio to get the best result possible - besides, I couldn't use Pro Tools to save my life!


Question: Where are you living nowadays?

Jacob Butler: I actually live in Melbourne these days - I have been here for six years and I live here with my fiancée Paula. I am floating back and forth between Australia and Europe at the moment and i will be back in Germany throughout October to promote the album there - exciting times!


Question: How would you describe your music in five words?


Question: Which artists inspired you to begin a career in the music industry?

Jacob Butler: I saw Nirvana Unplugged In New York when I was 12 on the TV and that was it! There was always a guitar lying around the house because my Dad is also a musician and I picked it up and never looked back. Later that year What's The Story Morning Glory by Oasis came out and that just took things to a whole new level for me... I was hooked. I played drums primarily as a teenager and a bit of guitar, which became more serious after I finished high school.


Question: Tell us about Come My Way.

Jacob Butler: It's a really fun, positive and upbeat song that's about pushing aside your fears and just going for what you believe in. it holds a special place in my heart as it has really opened up some opportunities for me. Having it featured on the Warner Bros theme parks campaign nationally was a pretty big buzz as well!

Jacob Butler: I'm hoping that things continue to travel along as they are at the moment - there have been some great things happening, and I hope to spend some more time in Europe next year playing shows and promoting the Album. We also currently exploring opportunities in North America which I'm pretty excited about!


Question: What are you listening to on your iPod at the moment?

Jacob Butler: Anything that was produced by Eric Valentine or Rob Schnapf.


Question: Where would we find you on a Sunday?

Jacob Butler: Most likely at home, reading the paper and taking it pretty easy!


Question: What's one rule you live by?

Jacob Butler: Somebody has to do it - so it might as well be me!


Question: Car you want to own:

Jacob Butler: 2012 Honda Civic - or a 1992 Honda NSX, then again - a vintage Porsche 911 would be nice, especially an early 70's model, and maybe a 60's or 70's Rolls Royce for Sunday drives to the wineries with the missus and a couple of friends!


Question: Car you do own: