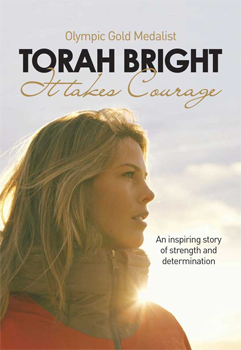 Two‐time Winter Olympian, Torah Bright, exists in a category of her own. With phenomenal snowboarding skills as well as the personality and natural beauty to match, Bright is the ultimate triple threat.

Boasting one of the highest records for wins as a female snowboarder–and although the podium finishes alone are proof of her abilities–it is Bright's progressive tricks and technical combos that pushes women's snowboarding to a whole new level.

Born and raised in Cooma at the base of the Snowy Mountains, Bright was on skis at the age of two, snowboarding at 11, and had turned professional by the time she was 14. Now, 28 years later, this Australian Olympic medalist is ready to share her remarkable journey for the first time.

It Takes Courage is Bright's heartfelt account of growing up in a close knit Mormon family, and follows the highs and lows of Bright's professional snowboarding career during which she became the first Australian Snowboarder to achieve a gold medal in the Winter Olympics. From surviving a serious head injury that threatened to end her snowboarding career, to the controversy she caused at the recent Winter Olympics where she was openly critical of the event's courses, raising safety concerns that made headlines back in Australia, It Takes Courage is an uplifting story of family, friendship, love, grief, gratitude, hard work and shredding.

Bright also explores the ins and outs of her closest relationships including the challenges she faced with her brother and coach, Ben, and why he walked out on her. Additionally, Bright speaks candidly on her short marriage to American pro snowboarder Jake Welch and why she nearly gave up her career as a result. With chapters divided into 'runs" (a skiing terminology), it is clear that Bright's courageous attitude and love of the alpine wilderness runs deep in her blood:

'I'm not afraid to turn, to try new things, to explore all the possibilities the backcountry has to offer. I truly believe it takes courage to claim your true purpose. To quiet the outside voices and just finally be you. I have felt my life either expand or shrink in direct proportion to my courage. I chose to keep fighting." – Torah Bright

Born in Australia to a family of snow lovers and athletes, Torah Bright quickly made a name for herself as soon as she hit the competitive snowboarding circuit. Torah has countless achievements under her belt including being the 2007 TTR Women's World Tour Champion, winning the gold medal at the 2007 and 2009 Winter X Games, being two-time World Superpipe Champion, and being named Female Action Sports Athlete of the Year at the 2010 ESPY Awards. Now, Bright is dancing her heart out on Channel 7's Dancing with the Stars!

Question: What inspired you to write It Take Courage?

Torah Bright: I was approached to write it however I had no interest in writing a book, I'm 27 years old and life is just getting good for me. It was my friends and family who encouraged me, they explained it was good timing and that there is no better time to write a memoir than when you're happy. It wasn't until I started writing the introduction that I found the reason and purpose to write the book which is simply because it's good to write your story down and have it for your family. I've done this for my growing nieces and nephews and for my future family – to tell my story. Now if people can take a little something from my life and my journey then that's even better.


Question: Was it difficult to relive certain aspects of your life, when writing It Take Courage?

Torah Bright: No, it was actually a beautiful thing to sit down and write about all that was grand and not so grand; in hindsight and growth out of those times, it's all beautiful. It's the hard times that make the good times that much more precious and beautiful; I'm grateful for all of that. Life is real and I wanted the book to be real and not fluff (laughs). It's by sharing and opening yourself up that others are able to connect by seeing others struggle with the same things. It's eye-opening that others can connect with my story in that life is life and everyone is dealing with the same issues.


Question: What would you say the highlight of your career, has been?

Torah Bright: In my career, I think it's pretty obvious to say the two Olympic medals but to be honest I don't really have a moment or particular event that I believe is my highlight. Those days on the mountain where I'm really feeling it or everything comes natural – those are the moments you feel elated and joyful because you're out on the mountain and there is great powder. I can't say the results and accolades are my favourite part about what I do, it's the enjoyment and fulfilment that I get from being in the mountains and being able to snowboard as a job that is a highlight.


Question: What advice do you have for us who have difficulties getting back into sports after an injury?

Torah Bright: That's a hard thing as everyone works through fear and disappointment differently. For me, sometimes I just have to believe that I have the ability and I don't push myself past my limit and I don't do anything I'm not ready or prepared for. It's a matter of jumping back on the horse and taking the first step and just doing it! It's all about self-belief. My brother, my coach would always say -you're better than you think you are' and sometimes you need to give yourself a pep talk because you do know you can do this, you know you're good (laughs)!


Question: The book is divided into runs rather than chapters; can you explain this?

Torah Bright: The books a little quirky with the analogies including bringing in Mary Poppins, I love my childhood stories (laughs) and I wanted to bring in my quirkiness!

Torah Bright: I am staying in Australia until after Christmas which is my first Christmas, in Australia, in 15 years. It won't be a white Christmas and I'll be with my family – I can't believe it's been 15 years since I've been home for Christmas. I am treating myself and making up for lost time with the family and my friends. I am loving being back home in Australia, I don't want to leave.

The two-time Olympian comments: "It's so nice to be home and enjoy these unbelievable snow conditions in...