Instructions for a Teenage Armageddon 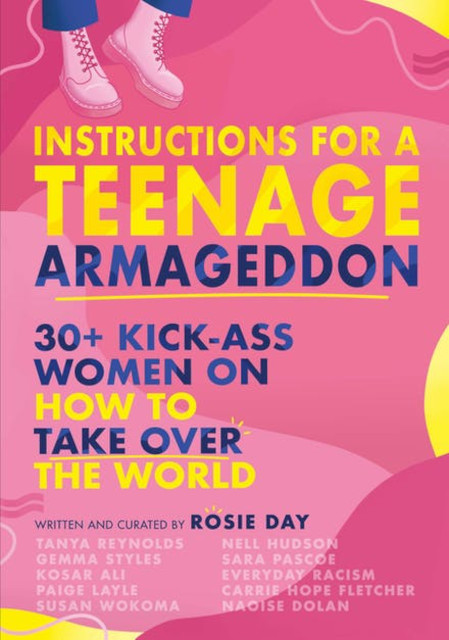 In this call to arms for teenage girls, Rosie Day has curated letters from a collection of some of the world's most loved and respected female figures to guide young women through their trickiest years, start an uprising and take over the world.

An unmissable guide for teenage girls and women everywhere who are ready to take over the world.

This book is a call to arms. Because though you may be going through the hardest and most confusing years of your life, it's time to channel your extraordinary power, spirit and ability to rise up and change the world.

Rosie Day has written and curated a collection of letters from incredible and inspiring women to guide you through each stage of combat towards a Teenage Armageddon. You will become a WARRIOR as you realise your worth, you will BATTLE your brain and learn to tackle stress and hormones, and you will be given the tools you need to begin your REBELLION.

Brave, disruptive and rule-breaking, this is a book unlike any other.

About the author
An award winning young actor Rosie has been named a 'Screen International Star of Tomorrow', and Instyle BAFTA Rising Star. Rosie has starred in Golden Globe nominated "Outlander", co- starred with Sarah Jessica Parker in rom- com 'All Roads Lead to Rome' and starred alongside Uma Thurman in 'Down A Dark Hall' a Lionsgate movie written by Twilight's Stephanie Meyer.

She led Sky's US based sitcom 'Living the Dream' for two seasons alongside Lesley Sharp and Philip Glenister. Other prominent screen credits include: The Seasoning House, BAFTA nominated Good Night, Good Omens, Prime Suspect 1973, Watership Down amongst many more. She's soon to be seen in feature Real Love alongside Sian Clifford and Russell Tovey.

As a writer, her debut feature film 'Pixie Dust' is being produced by UK based production company Studio POW and her debut play 'Instructions for a Teenage Armageddon' is produced by Brian Zeillinger (Dear Evan Hansen, Network) with a run set for 2021. Her first short film Tracks is currently on the festival circuit having been nominated for many best screenplay awards. Her second short 'Celaine' adapted from the 1999 play of the same name is currently in post-production.