Question: How would you describe Beautiful Tonight?

Gioia: 'Beautiful Tonight" captures that incredible moment when a person comes into your life and the clocks stop, the Angels start to sing and you realize that they are 'the one" you want to 'run, run, run away" with… It's such a special song to me and it was a real pleasure to record with my Producer, Jared Hancock and filming the music video, my first, was an amazing experience as well. As the Executive Producer of the project I wrote the treatment, chose the cast, stylists, and film locations as well as managing the day to day details of the entire project. I worked closely with the video's Director, Bojan Vanovac and with the rest of the team from Surefire Creative Studios. They did a killer job bringing all my crazy ideas to life. There aren't many independent music videos that are shot in over 10 locations with a cast and crew of over 50 people. It was a monumental task to manage but we got it done and I'm very excited about the final cut. The video has received over 50,000 views on YouTube so my fans seem excited about it as well. Thank you guys!


Question: What is different about Beautiful Tonight?

Gioia: Well at its core it's an old fashion love song; Simple and to the point. There aren't too many of those being produced these days.


Question: What should we expect from your next single, City of Love, City of Dreams?

Gioia: Something totally different than Beautiful Tonight! Musically it has a totally different vibe from BT and subject wise the song was inspired by the many highs and lows of being an independent musician. Most of the time, I write a song and I don't record it right away. Sometimes it's even years later that I actually record the song but with 'City of Love, City of Dreams", I immediately put it on the fast track to be recorded. I even started the video production for it before the recording track was completely finished. This is a totally different experience for me from most of my other tracks in the sense that the inspiration behind the track is so fresh in my mind that the vibe of the whole project is spot on with my original intent for the song. I'm really looking forward to begin filming it as the ideas are so fresh in my mind and I'm living them every day so the whole concept is very much from the heart.


Question: Where do you get your inspiration from when writing?

Gioia: I find inspiration from everyone and everything around me but I find I write my best work on the spur of the moment when writing music is completely unplanned. I guess at that point I am tapping into pure emotion. I find that when I plan to write music, I draw nothing but blanks or write something uninspired so to say. I guess I can't write songs on a 9-5 schedule which is all good. It just means I have to keep a voice recorder on me at all times.

Gioia: Video filming in Boston for 'City of Love, City of Dreams" with both track and video being released in late Spring. I would imagine a hip release party filled with lots of paparazzi's lol. 'Beautiful Tonight" remix will be released this summer along with a live video performance of the BT single. 'City of Love, City of Dreams" EP should be out by summers end. As for performances, we're actively booking dates so stay tuned for the summer listings! 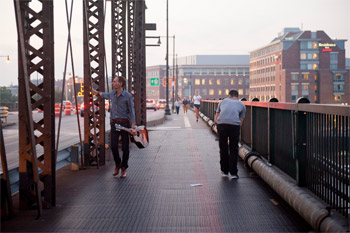 Gioia: Recording. Performing live is lots of fun and I really enjoy all the surprises that happen during a show (maybe I should be writing during those moments lol) but the recording process is so creative that nothing can compare to it. Even after hours of writing and recording and thinking 'Ok it's done", the next day I'll listen to a track and come up with more parts. It's really an endless creative process.

Gioia: I've learned and accepted that no one is going to care about my craft as much as I do, so don't seek or expect support or encouragement from anyone else but yourself. As an artist, there will always be naysayers around you and I've learned that their opinions are mostly irrelevant. Music is my craft. It's what I was born to do. So as long as I'm happy with the results, that's all that matters.

Gioia: Most of my day is taken up by endless social media networking and planning. In between I find time to write. I find film production and recording sessions take more time to plan and prepare for than the actual sessions themselves. It's a lot like cooking Thanksgiving dinner; you spend weeks planning, shopping and cooking; then in 1 hour everyone eats and it's all over. This is especially true with video production. It takes weeks to secure locations, cast, crew, wardrobe and props all for just 1 day of filming and sometimes all for just one scene.

Gioia: Having a concept and then turning that concept into an actual, tangible object. Bringing ideas to life is such a detailed, exciting process and you always feel great when your hard work pays off.

Gioia: My new site will be up this summer till then you can follow me on Facebook at https://www.facebook.com/GIOIA
Twitter at https://twitter.com/GioiaOfficial
and if you're old school there's always https://myspace.com/gioiamusic

Gioia: Love, animal companions (many!), a challenge, dark chocolate and music of course!

Gioia: I hope my listeners can find positivity and passion in my music, that it inspires them to never stop dreaming and to enjoy life one song at a time…

Full Name: Francis Joseph Gioia
Nickname(s): Frank the Tank!
Star Sign: Capricorn
Favorite Food: Dark chocolate and artichokes (it's a tie)
Favorite Film: Casablanca
Favorite Actor: Johnny Depp
Pet: 4 cats, 2 dogs and…turtle!
Person You Would Most Like to Meet: Rod Stewart
Hobbies/Interests: Scuba diving, History, MLB
First Job: McDonald's fry guy or should I say 'Fry Boy"!
Are you a Pub, Bar or Club kind: Bar
What Can You Never Leave Home Without: My digital voice recorder
What is the first thing you think of when you wake up in the morning: Feeding 4 cats, 2 dogs and a turtle!