Synopsis: Halston captures the epic sweep of the life and times of legendary designer Roy Halston Frowick. Acclaimed filmmaker Frédéric Tcheng (Dior and I) expertly weaves rare archival footage and intimate interviews with Halston's friends, family, and collaborators including Liza Minnelli, his niece Lesley Frowick and the Halstonettes. Experience the glitz and glamour of Studio 54-era New York, the thrilling struggle between Halston's artistic legacy and the pressures of big business, and witness the rise and fall of an empire.

As America's first superstar designer, Halston created an empire and personified the dramatic cultural and sexual revolution of the 20th century. Moving beyond Halston's embodiment of 1970s glamour, Tcheng reveals an intimate story about Halston's impact on fashion, culture, and business.

Question: Halston's career spans four decades, from First Lady Jacqueline Kennedy's inaugural hat to a corporate take-over in the 80's. What drew you to the subject matter and what themes did you want the film to explore? Interview with Frédéric Tcheng

Frédéric Tcheng: I first learned about Halston when researching Diana Vreeland: The Eye Has to Travel (2011), but my knowledge was fairly limited. It was mainly about Studio 54 and drugs, which is a misperception that I think a lot of people share about Halston.

But when I started reading about Halston, the business story completely pulled me in. It had all the trappings of a great corporate thriller. And it resonated with me personally. After Dior and I (2015), I was at a point in my career when I wanted to find ways to address the relationship between creative people and the business world. I've had experiences with corporations that made me realize how small a person can be versus the bottom line. Financial markets rule the world we live in. And I think in many ways it all started in the 1980s with Reagan's deregulations and the rise of huge conglomerates. That's why I was fascinated by Halston's struggle against the corporation in 1983. I saw all of these forces at play in a very powerful way. You can even see the beginnings of globalism and China's awakening. But Halston's story is so vast. When I started to assemble the film, other important themes came forward, like the place of LGBT people in the '60s, or the relationship between images and reality. There are so many layers to his story. 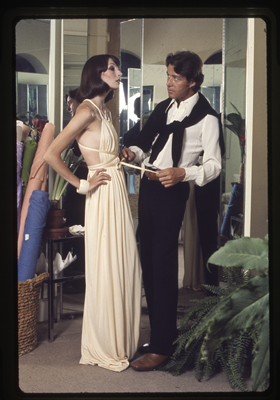 Question: Halston is largely remembered as the first "celebrity designer." What do you see as his contribution to American fashion?

Frédéric Tcheng: Halston's contribution is huge. He put America on the map in the 1970s. Today, his influence is highly visible, both in the trends of minimalism and in mass market collaborations with designers, which have become the norm. But for some reason, Halston has been overlooked when it comes to his place in fashion history. Despite his success, he's never received the same recognition as someone like YSL. I think this has to do with a basic misunderstanding of the clothes, which is that they're "simple." But Halston worked tirelessly to achieve that look. Fashion history often celebrates designers who make more obvious "artistic" statements. But Halston's impact on today's fashion is undeniable. He liberated women from the structure of French couture and made clothes that celebrated the woman's body instead of constricting it.

Halston never bragged about his technical virtuosity. But going to the Fashion Institute of Technology and looking at Halston's patterns was a big revelation for me. I saw that he was a designer in the purest sense of the word. Most of his garments are cut in one piece of fabric and perhaps one or two seams. The ingenuity is mindboggling. And never overstated. It was all about the woman, never about the artist.

I also think Halston's contribution goes beyond the clothes themselves. He was one of the first designers to use models of colour. And one of his muses was Pat Ast, an Andy Warhol superstar who didn't conform to body standards. Halston was always very vocal about the need for inclusivity in fashion. He wanted to dress everyone. And as a matter of fact, he designed many of the uniforms of American life, from the Olympics to Braniff Airlines and the Girl Scouts of America.


Question: Halston was the extensively researched. It includes more than 30 interviews as well as never-beforeseen archival footage of him. What are some of some of the exciting discoveries you made while making the film?

Frédéric Tcheng: I've never done such extensive research, and I must say that it was for me the most exciting part of the process. In a way, making the film quickly became a full-blown investigation. Our producers were relentless in pursuing footage and photos that had never been seen before. One of our biggest discoveries was recovering the raw tapes of an NBC documentary about Halston in China that never aired. The tapes were thought to be lost for 30 years but finally turned up after many searches. But even more thrilling for me was the legal documentation. We had these huge binders that we were able to retrieve from the businessmen and lawyers involved in the story. I must have read more than a thousand pages of memos. It was like reading a great detective novel. They detailed the day-by-day conflicts raging at Halston Enterprises. You begin to see two very different narratives emerge: Halston's and the corporations. And I became obsessed with finding out the truth.

So, in a sense, we had the images and the words. And much of the fun was playing with different combinations to pull the viewer into a film that is as complex as Halston himself.


Question: Halston is a visually striking documentary. Can you talk about some of your inspirations for the film?

Frédéric Tcheng: There were a lot of myths surrounding Halston. He was an elusive man who rarely talked about his background. I didn't want to flatten his story into a conventional biographical narrative as documentaries often do. I thought it would run counter to the mystique and aura of his persona. To me, it was more compelling to embrace the shadows and ambiguities of the story rather than cast a bright light on everything.

That's where Orson Welles came in. I loved how he structured Citizen Kane as an investigation. In the film, a reporter interviews everyone in Kane's life and walks away with a lot of great stories, but no secret key to the meaning of "Rosebud." I think that pretty much sums up what we do as documentary filmmakers. We're always investigating and sorting through different narratives. The big question is: Can you ever know someone like Halston? My instinct was to follow Welles' example and work in a kaleidoscopic kind of way in order to capture the complexities of his personality.

Film Noir was a strong inspiration for Halston, especially in their treatment of dark subject matter and their strong sense of ambivalence. There are a number of nods to classic noir, like the film's jazzinflected soundtrack and the use of narrator like in Sunset Boulevard. 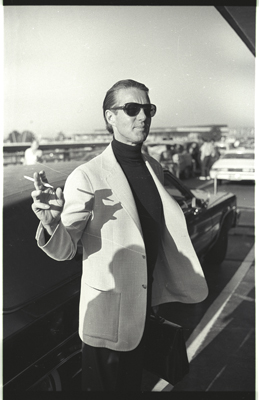 Question: Halston was one of the first designers to embrace television and video. He appeared on TV shows as early as 1971 and began videotaping all of his runway shows starting around 1975. Can you talk about how archival videos are used in the film?

Frédéric Tcheng: Fashion is a world of images, and Halston was a master image-maker. As a filmmaker, this theme is very important because it allowed me to explore my own medium in a variety of ways. Throughout the film, I began weaving references to image-making and their materiality (contact sheets, TV monitors, negative images, video glitches). I want the viewer to reflect on the relationship between the image and on screen and the real world. For instance, we rewind video in several instances in order to replay certain scenes from different points-of-view. The images are the same, but the meaning has shifted. Part of Halston's genius was his ability to project and control his image. Today with social media, everyone can do the same. It's become the norm. Halston's story allowed me to go back to the beginning and explore how images are fundamentally constructed and edited.


Question: The actress and former blogger Tavi Gevinson plays the role of a young woman sifting through the Halston company archives in the 1980s. Can you talk about casting Tavi and what her role means in the context of Halston's story?

Frédéric Tcheng: The character of the narrator played by Tavi acts as a surrogate for the audience (and for the filmmaker, too!). We follow along as she digs through a trove of VHS tapes and old press books at Halston Enterprises to reconstruct the story of Halston. I envisioned someone young, curious, perhaps slightly nerdy. Tavi was ideal. I've always loved her ability to use fashion as a platform to explore the world. She's interested in so many other things, and she has so many different talents. A common friend put us in touch, and we went out for coffee. It was the week of her 21st birthday, and I was stunned by how grounded and smart she was. She understood the Halston story immediately, as someone who has been in the spotlight from an early age, but also as a young entrepreneur.

Her character is key to the film. She doesn't have a lot of screen time, but her presence holds the film together. At the end of the day, it was very important for me to bring Halston into the 21st century for the audience. What better image than a beautiful young woman wearing an authentic Halston dress? In that case, images speak louder than words.

Question: Halston is a both a thrilling success story and a cautionary tale. In a lot of ways, it speaks to the times we live in today. What did you want audiences to walk away with?

Frédéric Tcheng: I didn't want to cast Halston simply as a victim. In 1973, he sold his name to a corporation and in doing so achieved unprecedented success and creative freedom. He took a risk to do something no one else had ever done at that time. It may have been a Faustian bargain, but in the process, he became "Halston". As Liza Minnelli sings in the film: "Nothing's gained if there's nothing tried." Halston definitely tried. He worked very, very hard. There was something deeply inspiring and life-affirming to me about Halston's fearlessness: he was the first to defy European hegemony on fashion, the first to go mass market with JCPenney, the first designer to visit Communist China, and the list goes on. So, I hope the audience is emboldened into "trying," in whatever shape or form.