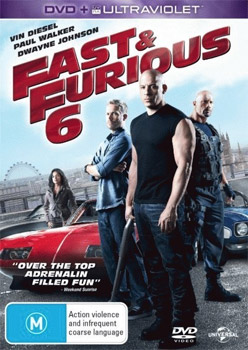 The mega-blockbuster and hit franchise, Fast and Furious 6 is the biggest fast movie to date and takes the franchise to the extreme. Join the full ensemble of original cast as they create explosive action, accelerating through the streets of Europe in a larger-than-life battle, fighting for honour, family and courage. When a Russian Military Convoy is taken down in Moscow by the lethal Special Ops mercenary, Federal Agent Hobbs (Dwayne Johnson), partners with the only man who can help him track down his target, Dominic Toretto (Vin Diesel). Years after toppling Rio's crime kingpin, Toretto is now living a quiet life with his current girlfriend Elena (Elsa Pataky) and unwilling to help Agent Hobbs without an incentive. Convinced by the idea of freedom and the shocking discovery that his deceased, former girlfriend Letty (Michelle Rodriguez) is alive and working for Shaw (Luke Evans), Toretto agrees to help Agent Hobbs and uncover the truth. Toretto's elite gang has been scattered across the globe since the succession of Rio, but are reunited with the common goal of freedom and family. The reunion is short lived as the crew quickly learn that Shaw is more cunning and ruthless than any of their past enemy. With higher stakes and grander machinery, Toretto's gang will stop at nothing to make their family whole again.

An epic film, of one of the biggest-­selling franchises, Fast and Furious 6 demands attention with its sheer scale and incredible stunts.

Blu-­ray™ Special Features:
Deleted Scenes
Gag Reel
MAKING OF THE FASTEST OF THEM ALL: Explore the epic saga of the FAST films from Fast 3 through 4, 5 and now 6. We'll reveal how Justin Lin and his team brought new energy to the franchise; then nurtured and grew a dynamic multi­‐movie story arc. We'll also touch on the crucial collaboration between Justin and Vin that began on FAST 4.

RACE AROUND THE GLOBE Director Justin Lin along with cast and crew discuss the bold, high-­risk decision to film FAST 6 overseas…including major shoots in London (during the Summer Olympics) and the Canary Islands (off the coast of Africa). They'll talk about both the unique obstacles that pushed them to their limits and the unforeseen benefits they reaped from their ambitious move.

REUNITING THE TEAM Just as Hobbs and Riley go 'hunting" to reassemble the members of Dom's team, we'll highlight the return of all the characters (and actors) that make up the larger FAST family. We'll place a special emphasis on Dom and Brian (and Vin and Paul) as the 'founding partners" of the group and the franchise.

LETTY'S RETURN Heralded by a crowd-pleasing cliffhanger in Fast Five, Michelle Rodriguez ('Letty") makes a dramatic return in FAST 6…but we soon discover her character isn't quite what we expected. We'll explore how the creative team engineered her resurrection.

THE MASTERMIND AND THE MOLE Meet the Fast Six 'newbies" – Luke Evans ('Shaw") and Gina Carano ('Riley") as they share their experience joining the cast of the Fast franchise and how their characters fit into this new plot.

PLANES, TANKS, AND AUTOMOBILES - FROM INTERPOL TO WEMBLEY: THE LONDON CHASE Grab a front row seat for the filming of this sprawling car chase through the streets of one of the world's most historic – and congested -­ cities. See how Justin and his team pulled off car-­flipping mayhem on a breathtaking scale.

HIGHWAY HEIST: THE CONVOY ATTACK Dominic's gang saves the day in this high-velocity battle featuring a tank, an armored cargo carrier, a harpoon weapon and more. We'll get a first-hand account of this intensely planned and executed action sequence

IT'S ALL ABOUT THE CARS - DRIVING WITH VIN On location in Tenerife, Vin talks us through a stunt he is about to perform. Then, from several angles, we watch as Vin rides his hot rod through an explosion and comes out unscathed.

GEARHEAD'S DELIGHT From the shop to the test track, to the set and back again, a look at the latest hot cars showcased in Fast Six. Narrated by real-­life car lover Paul Walker, this piece features Dom's latest Charger, Brian's Nissan Skyline GTR, the BMW M5's, the Alfa Romero and the classic cars from the film's car auction.

THE FLIP CAR We'll get an inside look at the Fast franchise's newest mind-­blowing vehicle – the pivoting FLIP car. Dennis McCarthy (Picture Car Coordinator) will take us through the coolest parts of this truly astonishing CAR, and the destruction it leaves in its wake.

HAND TO HAND FURY This jam-­packed featurette gives viewers a detailed look at the rehearsals, choreography, stunt work and filming of Fast Six's other bone-­jarring fight sequences. *will include exclusive rehearsal footage, often with principal talent, obtained from the fight coordinator.

Hero Fights– Dominic and Shaw fight for their lives during the intense Antonov finale sequence, and Hobbs goes toe to toe with the giant Klaus.
London Street Fight – Han and Roman contend with MMA­‐style combat from Jah in the streets of London

The Ultimate Cat Fight -­ one of the more vicious action beats in the film, the fight between Letty (Michelle Rodriguez) and Riley (Gina Carano). With Michelle an experienced boxer and Gina a champion MMA Fighter, the skills and intensity brought to bear in this battle were epic.
HOME SWEET HOME An insider's look at the entire Fast family as they work and joke around on set on the last day of filming, at the Toretto family home in LA.