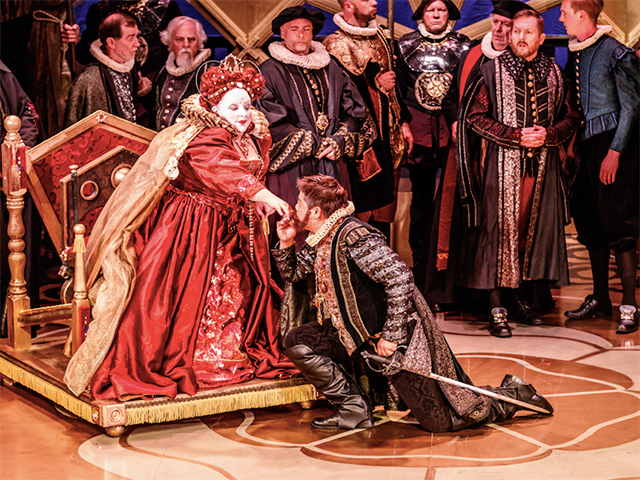 Melbourne Opera is staging the Gaetano Donizetti bel canto masterpiece Australian audiences fell for 45 years ago when Dame Joan Sutherland performed the title role. It has not been performed in Melbourne for over 30 years.

International star coloratura soprano Helena Dix, described as "the most exciting voice since Joan Sutherland" (Rob Holdsworth, ABR), returns to Melbourne to perform the role so few can perform. Her hometown return follows critically acclaimed performances at Royal Albert Hall and The Metropolitan Opera in New York, a highly successful debut as Donna Anna at Seattle Opera and most recently the pivotal role of Mrs Jessel in Turn of the Screw at Garsington.

Melbourne Opera's Artistic Director and resident Conductor Greg Hocking has seized upon the opportunity to revive this opera in Australia under the direction of the multi-Green Room Award winning Gary Abrahams (33 Variations with Ellen Burstyn, Admissions with Kat Stewart), pairing his celebrated and critically lauded direction with Dix's internationally acclaimed bel canto mastery.

"Internationally, this work is only ever performed when there is a leading soprano on the scene who has all the necessary vocal and dramatic qualities the part requires. It is one of the most challenging and demanding of all soprano roles," says Greg Hocking.

"Audiences so rarely get a chance to hear the work performed live; this is therefore a real 'event' not just another opera production," says Greg Hocking.

For Gary Abrahams, who won a 2022 Green Room Award for his direction of Red Stitch's Iphigenia in Splott this July, the anticipated production is his first opera. He will bring to life Lucrezia Borgia's ruthless world of lust and revenge, staging the story with 1970s mafia style notes and influences from the storied house of Gucci and Versace family.

"When Melbourne Opera approached me about this project I jumped at it. I adore the music for this work, and I love that it's a very character driven piece. I respond to the 'largesse' of opera; the big ideas, emotions, characters and settings. The director's role in opera is very different than in other theatre forms. Every choice I make has to be in service to both the music and the performing artist," says Director Gary Abrahams.

In the historical account of nepotism and treachery within the 16th century Vatican-adjacent aristocracy, Lucrezia was the gifted and privileged lovechild of the Italian Cardinal Rodrigo de Borgia, who later became Pope Alexander VI. She was a ruthless operator, thought to have poisoned many political rivals.

Australian opera lovers have a fond affection for this elusive soprano star vehicle, since Maestro Richard Bonynge and Dame Joan Sutherland (both Founding Patrons of Melbourne Opera) brought the work back to the repertoire with her virtuoso performance in the title role at the Sydney Opera House in 1977. The Sutherland/ Bonynge recording which followed is regarded as the definitive account of this bel canto masterpiece.

"The voice is big, beautiful and tonally sumptuous, equal to all the technical hurdles Donizetti threw at his prima donna. Dix is on the way to cult diva status in this repertoire" reviewed Opera Magazine.

Dix is thrilled to be heading home for further Melbourne Opera seasons following her triumphs in recent MO successes- last year's Macbeth, preceded by Norma, Roberto Devereux and Lohengrin. "The reason I left Australia so many years ago was to put myself up against the world stage, and it has benefited me deeply as an artist," says Helena Dix.

"When I come home, I bring with me such a wide variety of ideas and techniques that I've gathered on my travels. But the best thing is the 'Melbourne gal' is always in me," says Helena Dix.

"This cast is insanely wonderful. I'm very excited to be working with Chris Hillier who is dynamic in the role of the Duke and the wonderful James Egglestone as my secret son. Plus there are five tenors; luxury casting for sure with our local talent" says Helena Dix.

In 2022 Melbourne Opera also presents Siegfried in Concert led by international Wagner expert Anthony Negus at Melbourne Recital Centre (25 September) and Marriage of Figaro at The Australian Club featuring emerging artists (16 October) and in February 2023, Mozart by Moonlight in the Botanical Gardens in partnership with Australian Shakespeare Company

The complete Ring Cycle will be staged in Bendigo over March and April 2023, a first for regional Australia, with tickets already half way sold out.