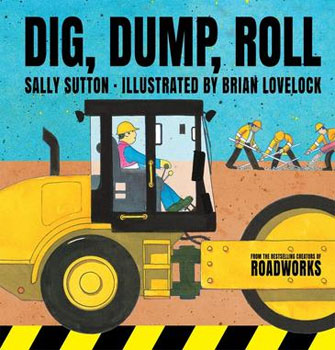 Guess what kind of truck is at work in this interactive book by the bestselling creators of Roadworks.

Crash-a-rumble Smash-a-grumble What's at work? Here's a clue: It will clear the ground for you. Bulldozer! Coming through! This is the follow-up to Roadworks that will delight tiny truck enthusiasts. It's an engaging, interactive text that asks readers to guess what kind of vehicle is at work. Visual clues alongside the text help ensure that our readers are challenged but can still be successful with their guesses. In the end, the vehicles work together to build a surprise.

Sally Sutton is the award-winning and bestselling author of Roadworks, Demolition and Construction. In 2009, Roadworks won the Picture Book category of the New Zealand Post Children's Book Awards, and in 2015 Construction was a finalist. Sally lives in Auckland, New Zealand, with her husband and two daughters. She has a keen interest in European languages and has an M.A. (Hons) in German. Her latest picture books with Walker are When We Go Camping (illustrated by Cat Chapman) and Ambulance, Ambulance! (illustrated by Brian Lovelock).

Brian Lovelock is a scientist and illustrator working in the power industry in New Zealand. He has painted all his life but has only recently ventured into the world of book illustration. His previous titles with Walker Books Australia include Your Mother Didn't Do That! and Roadworks, Demolition and Construction. In 2009, Roadworks won the Picture Book category of the New Zealand Post Children's Book Awards. In 2013, Brian was long-listed for the CILIP Kate Greenaway Award for his work on Demolition. In 2014, Flight of the Honey Bee (written by Raymond Huber) won the LIANZA Russell Clark Illustration Award, was a Storylines Notable Book and was a finalist for the LIANZA Elsie Locke Non-Fiction Award and the New Zealand Post Children's Book Awards. In 2015, Construction was a finalist at the New Zealand Post Children's Book Awards. Brian has teamed up with Raymond Huber again for their latest picture book with Walker, Gecko.