Queen Of My Castle, the follow-up to Rein's critically-acclaimed 2016 album Long Road, was released this past June. The fifteen-song disc is co-produced by Michael Leasure (drummer for the Walter Trout Band) and is mixed by Lincoln Clapp, who previously mixed Texas Flood by the late, great Stevie Ray Vaughan, one of Diana's biggest influences.

Question: Can you tell us about Queen Of My Castle?

Diana Rein: Sure! It's an album of 15 original songs that I started writing at the end of 2017. I wanted to make more of a traditional Blues album with some Blues Shuffles in there and put a little contemporary spin on them. I also wanted to write some Blues Rock tunes to put in there as well. It was an adventure to get it made because rather than Producing it on my own like I did with my second album, Long Road, I was able to enlist my friend Michael Leasure to Produce it and play drums on it. I was able to crowdfund it because of my amazing fans and when it was all said and done I was super lucky to have the wonderful label Gulf Coast Records sign me and release the album for me. The title song of the album was just about me having fun and feeling like I was the captain of my ship so to speak. Like I could accomplish my goal of making music, living life as a creative and seeing my visions through.


Question: How has your tour been?

Diana Rein: I've been in prep for tour and I have an awesome booking agent that is going to keep me quite busy in 2020. I have been doing some great one off shows and I have a longer tour coming up in March that will have be going from Texas to Florida. But before that I will be doing regional shows on the West Coast of the US. This summer will also see me out there doing Festivals and such. So far, I have had some wonderful opportunities with Gulf Coast Records to perform at the Las Vegas Blues Bender and on the Legendary Blues Cruise as Mike Zito's guest. That was a real blast.

Diana Rein: I have a song called Worth off of my album that I really love. It's got an awesome funky groove that made me think a bit of Prince when I wrote it. It's really fun to get into it with the drummer. I also love the message that it sends out to people that it's important to not get lost in what someone says or does to you. You have to constantly strive to take hold of who you are, own it and don't lose sight of it. Belief in yourself is key to not letting others get under your skin and make you doubt yourself. There are so many opportunities in life to lose sight of that so I wrote a song to make sure that I always reiterate that message to myself as well. 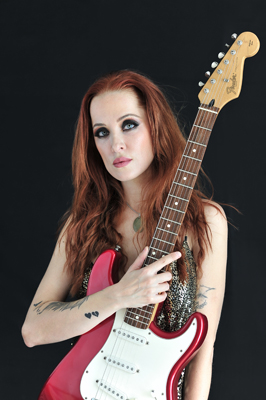 Diana Rein: Honestly, my first response has nothing to do with the living. It would be Prince. I would have loved to work with him in some capacity. He was so prolific and prophetic and magical and mysterious. It's the ultimate if Prince is in the audience and doesn't bust out of there because he digs your music. So it would have been totally nerve wracking to have had him in the audience, but if he stayed, I would've known I was doing something right and all would have been good with the World.

Diana Rein: I love aspects of both....I love the introspective; sealed off from the world to create vibe that recording gives me. It's just such a cozy feeling. And for me it tends to happen at the end of the year which coincides with the Holidays so it really gives it that touch of nostalgia and warmth that inspires me to create. But if it just ended there, it would be okay...but it's super great that I get to go out there and do shows for people and share my music. To see reactions that I get and know that it's affecting others positively. I know that I couldn't live without music and hearing artists that I love to listen to. I fully understand the power of music so if I can gift that to someone else then it gives me the ultimate joy. And the sooner I understood to embrace the live aspect and that mistakes happen, that makes it even more fun for me. Because mistakes bring on spontaneity and surprise and a feeling of accomplishment when you work your way out of them on stage. There's a lot of discovery to be had in mistakes.

Diana Rein: I would have to say it would be a feeling. It's not something that I can put into words, it's a feeling that I just need to get out. It's a need to be expressive and to also get that feeling out so that I don't keep it inside. It can be a mood that other music puts me in, or a mood that I am just in because of my day to day life. And then all of that pent up energy can finally be released when I pick up my guitar and start creating. I don't know where I would be without the ability to express myself. I have bad days now that songwriting pulls me out of so I imagine I would just be depressed all of the time if I didn't have that outlet.

Diana Rein: Currently I have Lil Peep on a lot. He wasn't a Blues artist but I listen to all kinds of music. In a short amount of time he managed to be a leader of a new wave of popular music. And I love that it wasn't about the best recording equipment for him and it didn't have to be perfect, especially when he first started out. He lived his art, there was no separation between life and art for him and when he sings you can hear that in his voice. I really love that about him and his music really puts me in a zone. I actually took his song When I Lie and I added my voice onto it, I added a verse and harmonies and some guitar on it. But I guess I can't put it out there because it is a re-mix and I would need to get permission from his Estate. So right now it's just for my ears. I go through spurts where I get into an artist and just listen to them for weeks. So I guess I am on a Lil Peep kick now. 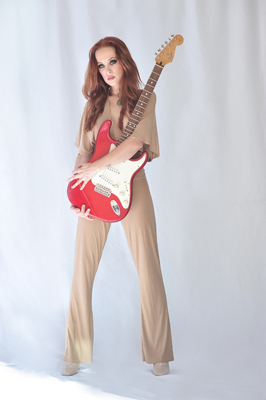 Diana Rein: All I know is that since I was in a crib, my parents told me that I would ask for them to put music on for me. Music has always just been there. Even when I denied it because I was focusing more on my acting career, music would always be there for me. I remember being a little girl and watching Star Search and wishing that I could be on there competing. I would sing all day long, dance all day long. I had Michael Jackson and Prince plastered all over my bedroom walls because my sister would tape them on our bedroom wall. I grew up with Pop artists as my idols and they were so magical to watch on MTV, they were just larger than life.

Diana Rein: I'd have to say Doyle Bramhall II. His album Welcome is one of my top favorites, it has the ultimate vibe. His writing and style is so inspiring to me and really gets me deep. He is also such a fantastic guitar player so it would be wonderful to be around him and see firsthand how he goes about creating and write a song or two together.

Diana Rein: The business side of things! Things that have to get done like contracts and pen on paper type things that can be a bit overwhelming when all you want to do is create. Sometimes it's really hard to get in the Flow and when you don't always know how to make a clear split, doing business stuff can be a distraction that you can talk yourself into doing until "oops where did the time go?" and now you lost a full day and haven't touched your instrument. So making sure that you don't let yourself get taken by everything other than music is a struggle sometimes.

Diana Rein: I wake up and take my dogs out, feed them. I check my email and see if there is anything I need to handle right out of the gate. Then I homeschool my son, make lunch and then I get on with my music until dinner comes around. I usually start with vocalizing, then guitar practice and after dinner I get into making new music. What I wish I could insert in there is some workout time but I haven't really figured out how to manage adding that in yet. I like doing yoga and light weights and dancing. I have started doing Tik Tok where I do some vids of me dancing and I joke that it's giving me my daily exercise so at least that's something!

Diana Rein: It has all been an education and I love constantly learning. I always seem to have some kind of learning curve that I am working on. Whether it's practicing guitar or learning how to do better recordings and mixing my own songs, I love that it's a never ending pursuit that always has room for growth. That's what keeps me in the game and excited about the possibilities and the unknown factor of how it's all going to play out. I love being surprised and excited about it all. It's been really cool being on the Production and Recording side of things with my music because it has given me a skill that will always serve me and help me to make more and more music.