Design Your Own Firework 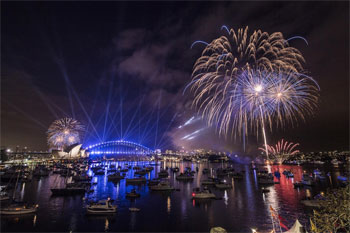 Design Your Own Firework

ABC ME and the City of Sydney are encouraging Australian children to let their imaginations explode as the Design Your Own Firework competition returns for the third year running.

One lucky child will see their design come to life over Sydney Harbour during the spectacular 9pm family fireworks display, which is watched by millions of people around Australia. The lucky youngster will also be part of ABC's New Year's Eve broadcast, pushing the -start button' on the fireworks display.

The Design Your Own Firework competition is open to Aussie children aged 16 years and under. ABC ME's Behind The News (BTN) officially opened the competition this morning during their 10am broadcast. To launch this competition, BTN investigated how fireworks are created, with a special interview with the mastermind behind the Sydney New Year's Fireworks, Fortunato Foti.

'This is Australia's night of the year, enjoyed by millions around the world, and for a child to be part of this wonderful evening is a once in a lifetime opportunity," the Lord Mayor said.

'I can't wait to see the winning entry light up the sky on New Year's Eve."

ABC Director of Television, David Anderson, said: 'Sydney's New Year's Eve fireworks displays is a highly anticipated event, and one of the best in the world. The ABC is thrilled to be able to offer this opportunity once again. With such a sought after prize, the challenge is on for Aussie kids to send in some amazing and unique designs."

To enter, kids are invited to put their imaginations to the test and draw a unique firework design. The design demonstrating the most creativity, effort and potential to be reproduced as a firework within the display, will be announced as the winner.

ABC ME's News to Me program will announce the winner on Sunday 17 September 2017.

The winner will receive a trip to Sydney for a family of four that includes tickets to the Sydney New Year's Eve official Dawes Point viewing area and the chance to be part of the live ABC NYE broadcast at 9pm.

The winning design will be brought to life by Foti International Fireworks, the company that has delivered Sydney's spectacular New Year's Eve displays since 1997. Master pyrotechnician Fortunato Foti says bringing a child's firework design to life is an exciting challenge.

His advice to budding designers is to look at the world around you for inspiration. 'Design comes from imagination. Sometimes it's just about looking at the environment such as a simple flower and seeing if it can be turned into a firework." Mr Foti said.

'I love seeing what kids' imaginations come up with. I can't wait to see what designs they come up with this year," Mr Foti said.

Put your grand idea down on paper
Add colour to your design to bring it to life
Upload your entry by 5pm (AEST) Monday 21 August
Check out our easy step-by-step guide and upload your entry at http://www.abc.net.au/nye