Chip & The Charge Ups The Tide is High Interview 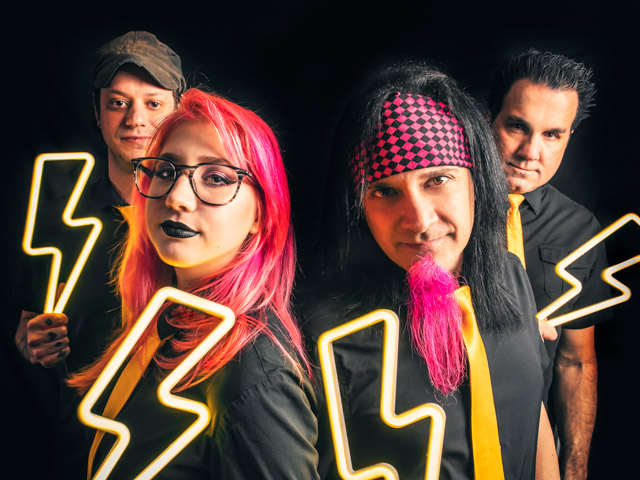 Lightning in Our Veins

Chip & The Charge Ups have premiering the music video for their remake of "The Tide is High".

The video release comes on the heels of the band being voted "Best Alternative Band" and "Best Punk Band" last month in the Iron City Rocks Pittsburgh Music Awards. The band is led by the colorful and unique father/daughter vocal duo of Chip Dominick and 18-year old Maleena. Chip & The Charge Ups has shared the stage with national acts including Dirty Honey, Dee Snider (Twisted Sister), Nita Strauss (Alice Cooper), and YouTube sensation, Liliac. The band will be releasing its third album, Lightning in Our Veins, on all major digital outlets on April 3, 2020 and will host an album release party the next night at the Hard Rock Café-Pittsburgh.

Chip & The Charge Ups' punk influences are evident in the ultra-creative remake of the classic song popularized by Blondie in the 1980's. The video overflows with a fun vibe and showcases Maleena's showwomanship that belies her years. Whether the viewer is too young to remember the original song or a long-time fan of it, the electrifying energy of the song and video will captivate them. The video also ends with dialogue that gives a subtle and surprising nod to a beloved classic film, providing a smile to those paying close enough attention.

Question: Why did you decide to remake The Tide is High?

Chip Dominick: When we first formed the band, we decided to do a few cover tunes to ease people into our original material. "The Tide is High" was one of those. It ended up being the one we "remade" more than "covered" and also one that our audiences really got into!


Question: Can you tell us about filming the video for The Tide is High?

Chip Dominick: Filming the video was a blast, we filmed it at Sara's Campground in Erie, Pennsylvania – an awesome little private beach with such a welcoming vibe. We drove our friends up from Pittsburgh – about a two-hour drive. And we got to play music, dance, jump, mosh, and crowdsurf all afternoon on a beach! It was as fun as it sounds!


Question: How did it feel to be voted "Best Alternative Band" and "Best Punk Band" in the Iron City Rocks Pittsburgh Music Awards?

Chip Dominick: We were absolutely honored by the awards. What makes us feel so good about them is that they are entirely fan-voted. Our fans had our backs and we are so thankful for their support! There are a gazillion things to do online, so it was heartwarming to know everyone could take a minute to first nominate us, and then to vote when we were one of the top three nominees in each category. We love our fans!

Chip Dominick: We call our music "electrifying East Coast power pop." Broken down a bit, people can expect to hear tons of energy in our music. People can also expect singalong melodies, like those from the pop genre. And people can also expect an urban attitude. With those three elements combined, we feel we have a sonic recipe that's as unique as it is exciting!

Chip Dominick: We love both, so it's hard to compare! Recording is cool because a recorded song is immortal. It has the ability to outlive the artist and serve as a gift to the future. We recognise that and, therefore, love to record. That being said, there's nothing like getting in front of a live audience and feeling the energy being transmitted back and forth! That energy is what has inspired much of our new music, which we've recorded and are now releasing!

Chip Dominick: Up until now, it has been "Front Row" from our first album, "Flow of the Current, Part I (+)." That song is about the incredible experience of being at a concert, so playing it as part of a concert makes it feel so perfect. However, with our new album, "Lightning in Our Veins," coming out, I have a feeling that will change. We've played "Toxic Human" already a couple times live and people are reacting to it positively in a surprising way! We've played "Iced Tea and Lemonade" once and the crowd was singing along by the second chorus even though they never heard the song before! And, I think our new Ozzy Osbourne/Lady Gaga mashup, "Bark at the Bad Romance," will blow people's minds when they see us perform it live. So, our favourite song to play live is changing by the day!

Chip Dominick: I have been a fan of Halestorm since before their first album came out. The guitar that you see me playing in "The Tide is High" video is actually the Lzzy Hale Signature Gibson Explorer. I was able to make some inside connections and become the first member of the public to own one. So, if Halestorm was at a show of ours, that would be incredible!

Chip Dominick: Coming up with a band name was a tough process! Up until 2016, I went by the stage name "Chip DiMonick" and was in a band that was named after me, a la Alice Cooper, Marilyn Manson and Ozzy Osbourne. I took a family health hiatus until 2018 and wanted to return with a different sound and a different name. However, I didn't want to lose the recognition that I had worked so hard for up until that point. So, I knew I wanted the band name to be "Chip & The" something. I came up with a list of 26 different band names and had friends and family vote on their favorites. I narrowed it down to two, and actually chose another name and had a logo designed. The logo was so darn ugly! So, I had the designer try a logo for Chip & The Charge Ups and everything looked so right! So, we settled on that band name and the rest is history!

Chip Dominick: When I announced that I was putting a band together, my longtime friend Jeff DiPerna made it known that he was interested in drumming, so he was a natural fit. Our original guitarist replied to a shared Facebook post. He later stepped down from the band and was replaced by DJ Carothers, who had been in my previous band from 2013-2016. And, while it may seem that my daughter, Maleena, would have been planned to be a co-founder, that's actually not the case! I had scheduled auditions with a number of bassists while also planning our first show. Those bassists either didn't do so well in their auditions or they didn't show up! So, on nights with unsuccessful or canceled auditions, we'd ask Maleena to sit in on bass. We didn't end up finding a bass player before our first show, so Maleena played bass for that. And, she did so amazingly well at that first show, we knew she wasn't a fill-in: she was meant to be in the band!

Chip Dominick: I tend to listen to mostly newly-released music. So, lately, I've been listening to new albums from Green Day, Halsey and Sleeping with Sirens.

Chip Dominick: When I was around 13, I heard Led Zeppelin and that got me wanting to play guitar. Once I started playing guitar, I opened my horizons to listen to so much different music and just never stopped playing and writing music!

Chip Dominick: In addition to Lzzy Hale, who I previously mentioned, Butch Walker is one of my favorite songwriters. I'd love to have a day to sit down with either of them to write a song and see what magic we could create!

Chip Dominick: Days are different depending on what part of our album cycle we are in. Some months would be spent writing music, the following months would be spent recording music, some months are spent promoting our upcoming recordings, and then some months are spent focusing on performing. Right now, we are so excited about our new album, we are spending a lot of our time making connections for media opportunities and doing interviews just like this, which is awesome because it gives us a chance to spill our hearts out and hopefully reach new fans who will give our music a shot!

Chip Dominick: The most rewarding part of being an artist is knowing that we connected with someone on some level through something we created.

Chip Dominick: We want to get "Lightning in Our Veins" out into the world. We are refining our stage show so that our shows supporting this album will be new and more exciting than ever!