Caryn Elaine Johnson (born November 13, 1955), known professionally as Whoopi Goldberg (), is an American actress, comedian, author, and television host. She has been nominated for 13 Emmy Awards and is one of the few entertainers to have won an Emmy Award, a Grammy Award, an Academy Award, and a Tony Award. She was the second black woman to win an Academy Award for acting.

Goldberg's breakthrough role was Celie, a mistreated woman in the Deep South, in the period drama film The Color Purple (1985), for which she was nominated for the Academy Award for Best Actress and won her first Golden Globe Award. For her role in the romantic fantasy film Ghost (1990) as Oda Mae Brown, an eccentric psychic, Goldberg won the Academy Award for Best Supporting Actress and a second Golden Globe, her first for Best Supporting Actress.

In 1992, Goldberg starred in the comedy Sister Act, earning a third Golden Globe nomination, her first for Best Actress – Motion Picture Comedy or Musical. She reprised the role in Sister Act 2: Back in the Habit (1993), making her the highest-paid actress at the time. Her other film roles include Made in America (1993), The Lion King (1994), Boys on the Side (1995), Ghosts of Mississippi (1996), How Stella Got Her Groove Back (1998), Girl, Interrupted (1999), For Colored Girls (2010), and Teenage Mutant Ninja Turtles (2014). In television, Goldberg is known for her role as Guinan on Star Trek: The Next Generation; since 2007, she has been the moderator of the talk show The View.

Ave Maria Mulligan leads a simple life. She lives with her mother, runs the pharmacy and at 40 has decided that...

If Someone Says "You Completer Me," Run!

From bestselling author, household name and host of The View, Whoopi Goldberg, comes the perfect antidote for...

In the middle of a raging thunderstorm, a travelling circus accidentally leaves behind some very precious cargo... 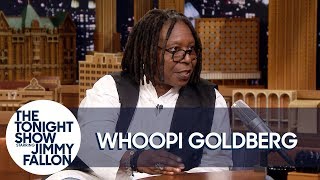