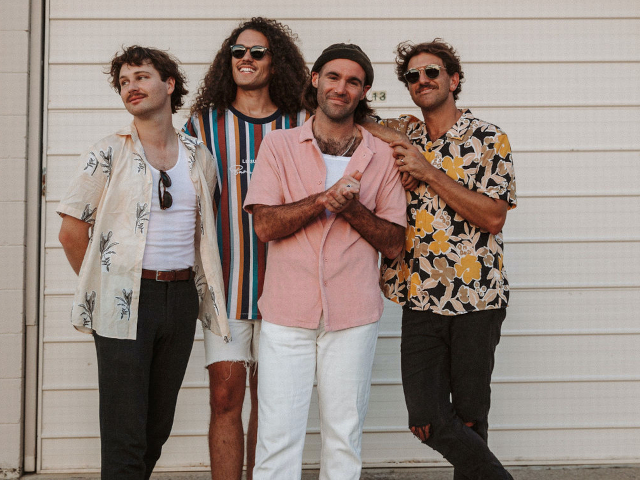 Sydney/Byron Bay collective CARAVÃNA SUN release their third studio album 'Burning Palms'. The electrifying 10 track album, written and recorded all within the past 2 years includes an eloquent ode to companionship, 'Charlie', the intensely personal song 'Stella', the dreamy rock odyssey 'Afterlife' and their uplifting new single 'Leave It Behind'.

Although their new album was written whilst on tour in Munich and Lisbon, 'Burning Palms' is an album that sees CARAVÃNA SUN return to their roots and find appreciation in nature as it was recorded in a secluded space deep in the heart of the Blue Mountains, NSW Australia. Sonically the album lives and breathes in a way that means they could play the songs live, and is a celebration of the band's longevity writing and performing together for over a decade.

"Collaboration was a key aspect as Chris Smithson ended up tracking a lot of the bass guitar parts and Ant Beard would swap over to keys. With many different influences, we ended up with a collection of songs that was truly necessary for us to write, given the pandemic. It was a truly cathartic and important record for us and saw the four of us as artists grow and redefine the creative cogs that turn Caravãna Sun behind the scenes. All of these songs were driven in such a way that meant we could play them live. For Caravãna Sun, the live connection has always been at the core of what we do and were super proud to be bringing these songs to the global stage"
CARAVÃNA SUN


Accompanying the electrifying & heartening single 'Leave It Behind' is a nostalgia-tinged music video, filmed around the stress and suburbs of the Sunshine Coast, before the band hit the stage with iconic Australian act The Cat Empire. In anticipation for the crowd that awaited them, the band wanted to capture the nerves, excitement, revelry, and passion in all of its glory. A refreshing rebirth after months and years of rescheduled & lost touring opportunities.

"We shot the video in the back streets of Maroochydore, Sunshine Coast, right before our show with The Cat Empire. We wanted to capture that pre-show energy. The way anticipation and excitement can evoke a sense of excitement and gratitude for what we do. With over 6000 people in the crowd, we knew we would capture something special." CARAVÃNA SUN

Produced by CARAVÃNA SUN, and mixed by Andy Lawson (Death By Denim, Eskimo Jo, End of Fashion, Little Birdy) at Debaser Studio, Perth with additional mixing and engineered by Ian Pritchett at Laketree Mountain Studios, Blue Mountains, 'Burning Palms' showcases the band's heartfelt introspective songwriting talent as they wrote and arranged every song on the album.

"After 10 years as a band, we've felt that no matter the music, the vibe of wanting to make music with friends always comes first. If we take care of each other, the music takes care of us." CARAVÃNA SUN

Since 2011 up until early 2020, CARAVÃNA SUN are known for their dynamic live performances and energy and have toured Europe, playing over 300 shows/festivals/open airs in Europe/UK. Highlights include Boardmasters (UK), Headlining Madnes (NL), Summer in the city (Germany), Boomtown (UK), Reggae Sun Ska (France) to name a few. They have toured with iconic artists Madness, UB40, The Cat Empire & Fat Freddys Drop and have built up quite the reputation beyond the sunny shores of Australia.

CARAVÃNA SUN has not only cemented their place as a standout band across the world, but also shown no signs of slowing down. Signing with Berlin's Embassy of Music and joining a heavyweight roster including Björk, Moby, and fellow Aussie acts Ball Park Music. As a result of their extensive touring schedule pre-Covid, the release of the album 'Live in Germany' was only natural, extending their live show from audiences of over 5000 people to listeners around the globe.

They've also had success with their hypnotic tune 'Whale Song' which was featured in the global award winning documentary, 'Seaspiracy'. It was a major success across Netflix with over 200 countries, which led to 'Whale Song' hitting one million streams - an increase of 250,000 streams in 2 months - and even hit the trending charts in the UK and Germany.

2022 is shaping up to be the band's biggest year yet and fans will be delighted to know that their new album will be supported by a tour. "We're super excited to take this record on the road. With shows around Australia & over 2 months of shows booked throughout Europe & the UK, we're beyond ready to bring this live energy back to the people." CARAVÃNA SUN