Camarano Give It To Me Straight Interview WA act Camarano have mesmerised fans with genre-bending sounds since their debut single "Ashes" in 2017. Having released their EP Shadow Calling in 2019, Camarano returned with their first new music this year with the release of "Holiday Inn" which was added to Spotify's Indie Arrivals playlist. The band now release "Give It To Me Straight", the punchy second single from their forthcoming album due in early 2021.

Lead singer Mat Cammarano explains that the new track "Is a song about communication (or lack thereof) and the growing frustration that comes from having to read between the lines. It is the most raw and revealing song on the album and (ironically) proved to be the most challenging to get over the finish line. The song went through several iterations and the final version has elements from four separate sessions. Eventually I stumbled on a combination of elements that truly supported the immediacy underpinning the songs sentiment. The very act of putting it out into the world is both exciting and scary."

The band's sounds are influenced by the likes of The War on Drugs and The Shins, both of which are resembled in the forthcoming album. Before embarking on the project, lead singer Matt Cammarano was a multi-instrumentalist who has played sideman on guitar, bass and keys for acts including The Money War, Michael Savage, The Peppermint Club, Nicky Sandover and Bri Clark. Building on from "Holiday Inn", the new single is sure to get fans excited for what is sure to be a huge year for Camarano in 2021.


Question: What inspired Give It To Me Straight?

Camarano: It's a song about communication (or lack thereof) and the growing frustration that comes from having to read between the lines.

Camarano: I've released two EP's in the past, this being my first attempt at a full length album. I went through the inevitable days of despair and doubt but pushed through and made something I'm proud of. I recorded and produced it during lockdown in my home studio which proved to be the grounding experience I needed. 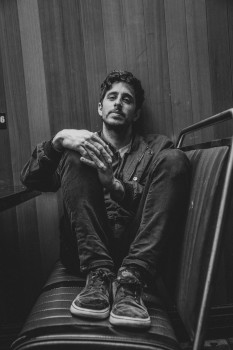 Camarano: The underlying theme of the album is acceptance for everything you are and everything you lack. Leaning into your strengths and shortcomings.

Camarano: Recording is my bread and butter but I love the surrender that comes with a playing live.

Camarano: Shadow Calling, towards the end of the song we go into this noisy/nasty/loud section where anything goes.

Camarano: My cousins wedding, I would have been late teens. I remember feeling supreme confidence until the moment I had to get up there.

Camarano: Stumbling upon something fresh, something I am yet to explore. It could be a particularly sentiment, a chord progression or a patch on a synth.

Camarano: At the minute it would have to be Jessica Dobson (Deep Sea Diver)

Camarano: Getting the balance right between dream land (where songs live) and reality.