Book of the Weak 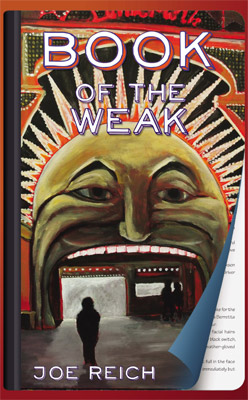 Book of the Weak

In Book of the Weak, Dr Moss Lane lives the so-called good life, with a busy medical practice, an attractive wife and a modern luxury home in the Melbourne suburbs. And yet despite all this, Moss is trying desperately to escape a reality many would aspire to. Examining the internal life of a man so weighed down by his past that he is cut adrift from his present. Then as the story, and his life, unravels, a lack of attention to those around him has consequences for Moss, both comic and tragic. Book of the Weak is the engaging second novel from Melbourne author Joe Reich, and has wide appeal to lovers of comedic adult fiction.

Toorak-based Joe Reich is an ophthalmologist and author of the critically acclaimed novel, I Know Precious Little (Sid Harta Publishing, 2011). Prior to his fiction writing Joe had many technical papers published in the field of medical education. He has also been shortlisted in The Australian Women's Weekly Short Story Competition, and continues to write today.

Question: What inspired you to write Book of the Weak?

Joe Reich: The critical response to my first book was most encouraging and that allowed me the freedom to believe perhaps I had another book in me. This second book is not a sequel but takes the similar setting, the wealthy Eastern Suburbs of Melbourne and again a medical theme. Once more I have presented a blackly comic look at the problems of the baby boomers as they head into their sixties. There seem to be so few Australian contemporary novels that deal with this age group in this setting. While the main character is a GP, and a rather bad one at that, the story is universal in the problems Dr Moss Lane confronts are those many would face. The story begins with my doctor buying a book and what takes place over the following week as he reads it. Once I had started even I needed to know what happened next.


Question: Did a particular person in your life inspire the character of Dr Moss Lane?

Joe Reich: Dr Moss Lane is a caricature based on the many years of reading the annual reports of the Medical Board about those very few doctors who behave so erratically they end up losing their practicing licence. Most of these have been made public and usually involve drug taking, inappropriate sexual relations with patients or serious illness. While Moss's failings are relatively minor in comparison, even human, they still give us the image of someone fairly impaired in his ability to do his job. I see him somewhat like a medical Sir Les Patterson, for the followers of Barry Humpheries, a character who is cringe making in his lack of awareness of his personal and public failings, yet appearing self-assured and in total control. The beauty of comic writing is the freedom to create a parody, to make someone you know has never existed and just enjoy their antics. Dr Lane is in no way based upon any doctor I know.


Question: What was the best thing about writing the character of Dr Moss Lane?

Joe Reich: There are moments when Moss seemed like a Jaques Tati character stumbling through life. A likeable bumbler, he was a joy to create. The fact that he is also part of a family allows his foibles to interact with the other much straighter characters. When we discover his black side I think he becomes even stronger.


Question: Why do you think Book of the Weak is perfect for book clubs?

Joe Reich: Book clubs need themes and not just plots to explore. Book of the Weak raises many issues. Do we read to cop out? What compromises does a long time marriage require? When should we retire? What are the warning signs? How influenced by our parents are we? When do we report an impaired practitioner? There are themes of religion and belonging, regret, the role of the house he lives in (nearly a character in itself) within the book. Even the title raises some issues to discuss.. who is weak?

Joe Reich: The story takes place over a week. Even though there have been novels that describe the events of a single day I felt a week in the life of a doctor was hardly enough to keep a reader's interest, unless there were serious issues and events occurring. The issues themselves were needed to create tension and continue interest. Hopefully they feel as real to the reader as they seem to feel to Moss. The issues and themes weave into each other, the most subtle lies deepest and may be difficult to discover.


Question: Are you working on a third novel?

Joe Reich: Each novel has taken over two years to write and then another to edit, while still working full time. I am currently well into my third book. Another Melbourne medical story but set much earlier, and less cynical time, than my two previous books.