After a massive 2018, which saw one of Australia's most loved troubadours Bob Evans receiving the Best Of treatment via new album Full Circle alongside a hugely successful national tour to boot, the distinguished artist has announced an intimate run of regional shows for March 2019. Kicking off at Narrabeen RSL in Narrabeen on March 14, the tour will head through Newcastle, Bulli, Mornington, Belgrave, and wrap up in Ballarat at Karova Lounge on March 30. On support duties will be Madeline Leman in Victoria, and Caitlin Harnett in New South Wales.

With five solo studio albums down the track, Bob Evans' Full Circle – which also features new single Drowning – is not the traditional 'greatest hits' or 'best of', as Kevin Mitchell explains, "I like the idea of it being presented more like an introduction to my work if you had never heard of me. This would be the record for that person. So I didn't want to just bundle the singles together or present the songs in the order they were released. Some singles didn't make the cut, in favour of album tracks that have grown legs of their own and found some kind of special place of significance without ever necessarily being on the radio or anything… I'm proud of what I've managed to create."

Fans of Bob Evans are in for a real treat with the upcoming regional shows, as Kevin enthuses, "It was always my intention to do some regional shows to celebrate the release of Full Circle. The capital city shows I played in 2018 were such a joy, but these shows are going to be a little bit different. I will be performing solo, which allows me to change the set list up a bit each night and play longer and more spontaneous sets. One thing that will carry over from the last tour however will be the song raffle, whereby everyone who enters the room will receive a raffle ticket and if your number is called out you get to request any Bob Evans song ever recorded and I will do my darndest to remember how to play it! This part of the show was pretty fun last time so I'm looking forward to finding out what happens this time around. I also can't wait to get behind the wheel and do some long drives, listen to a bunch of music and spend time in some quality country pubs. It's one of life's great pleasures!"

Victoria support artist Madeline Leman has been tearing through Melbourne's Americana scene for a number of years, singing about not only the everyday experience of being a women, but also the absurdity of the gendered experience of being a woman in the music industry. NSW support Caitlin Harnett's songs evoke Laurel Canyon of the early 70s. Combined with her guitar, banjo and harmonica, her music has the lilt of folk, a touch of pop and the honesty of Americana.

Mitchell was already under the Australian music spotlight as singer/guitarist for indie-rock-darlings Jebediah when in 1998 he found a t-shirt in a Perth op-shop with the number 15 on the back, and the name 'Bob Evans' printed on the front. Coincidentally at this time he was embarking on his first solo shows in Perth and a random name on someone's discarded basketball shirt took hold. He may have grown out of the t-shirt, but the name fit and has stayed for an impressive solo career.

"This Bob Evans guy has been hitching a ride in my life for 20 years," Mitchell laughs. "It's an unusual relationship to have with something that isn't real."

Question: What inspired the release of Full Circle?

Kevin Mitchell: I wanted to tie up my previous records together and create a little dividing point in a way, between that work and everything moving forward. It's been five albums over 15 years so the timing felt right and I wanted to be proactive about it so that I had complete creative control over the release. 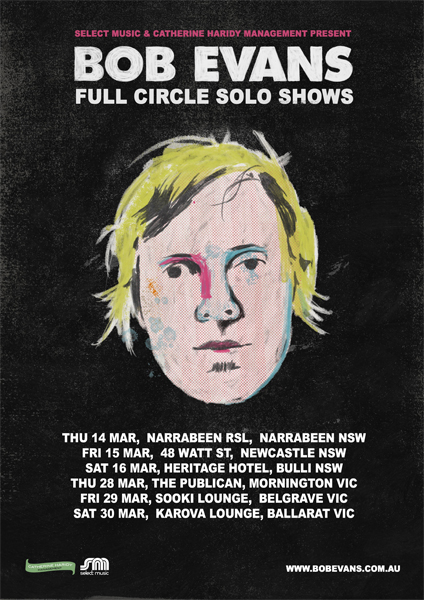 Question: What can attendees expect from the upcoming regional tour?

Kevin Mitchell: I'll play pretty much everything off Full Circle plus there will be a song raffle. Everyone who comes to a show will take a raffle ticket at the front door and then I will pull them out of a hat on stage and whoever's ticket gets called out can request any Bob song they like and I will attempt to remember how to play it.


Question: Where did you come up with the idea for the "song raffle"?

Kevin Mitchell: I was trying to come up with something different for the tour that I'd never done before and I came across the Ben Folds tour where he got everyone to throw paper aeroplanes on stage with requests written on them. That's a great idea and whilst I'm not suggesting this happened, it would be possible to manipulate that situation and just play pre planned songs without anyone actually knowing. The raffle is completely transparent and leaves me nowhere to hide!

Kevin Mitchell: I think it will always be "Don't You Think It's Time?" because people respond so well to it. I'm very lucky that my most popular song is also one that I love to play. I hear for some bands that is not always the case!

Kevin Mitchell: Well I immediately think of my idols but then if I knew they were in the audience I would probably freak out and not enjoy the show. Also, if they were really famous it would cause a scene which I wouldn't want to have happen either. So I'm gonna say my wife.

Kevin Mitchell: It used to be all about performing live when I first started out but gradually over time I have become more and more interested in the studio and these days I like both equally. It took me a few years and a few records before I felt like the albums I was making started to sound good. There was so much to learn about recording in the studio. Playing live on stage has always come naturally to me and I had heaps of practice growing up doing school musicals and things like that. I was a drama kid at school.

Kevin Mitchell: I'm listening to a lot of 80's rock stuff, like Bruce Springsteen, Tom Petty and The Smiths. I'm totally in love with that chorus electric guitar effect that was everywhere in the 80's. Lots of Ryan Adams too. I still listen to lots of Wilco. More current stuff I've liked has been Emma Louise's new album, which I thought was beautiful and highly creative.

Kevin Mitchell: There have been a lot along the way. I've been doing this as a full time job since I was 18 or 19 and I'm 41 now so you can imagine that over that amount of time all sorts of stuff happens. These days the biggest challenge is just surviving financially, providing for my family, finding time to write songs and hustling together enough work to keep me afloat.

Kevin Mitchell: It depends if I'm on the road or not. When I'm on the road it's just a lot of travelling, by car or by plane, a lot of late nights and early mornings. Alot of waiting around back stage between sound check and stage time. If I'm at home I get up, get the kids ready for school then head in to my garage and spend all day writing, demoing and doing bits of press.