Ben Folds Five Do It Anyway 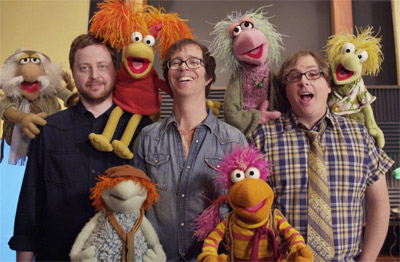 Ben Folds Five Do It Anyway

Hardwick describes how this cluster of awesomeness happened:
"In a meeting with Lisa [Henson, CEO, The Jim Henson Company], she casually said, 'Next year is the 30th anniversary of Fraggle Rock. Would you want to do anything with the Fraggles?' 'WHAT THE [expletive]?? That's an OPTION?!' I loudly replied. I think I scared her a little. I knew Ben had a new album releasing in September so I threw his name out. Lisa said 'that would be amazing' without hesitation. It was beautifully serendipitous. It seemed like a no-brainer to me, but I still cautiously pitched it to Ben, not really knowing his relationship with the show. I think I just spit words out, 'YOU. VIDEO. FRAGGLES. ME PAY FOR!'"

Folds was VERY interested, it turns out, and had the perfect song in mind. "When Ben sent me Do it Anyway, I knew within the first five seconds that the song was perfect-the bouncy piano… the dancing bass …it actually sounded like it was intentionally written for the Fraggles. I can never fully express the amount of nerdy joy that I felt on set seeing Red Fraggle jump around on Ben's piano," said Hardwick. "And the fact that I was able to weasel my way into the video was a dream come true."

Formed in 1994, Ben Folds Five changed the course of indie rock in the mid-1990s before amicably parting ways in 2000 to pursue different artistic ventures. Now, after twelve years, the indie pop trio has returned to bring their unique pop sensibility to both Fraggle Rock and the Nerdist Channel.

Red Fraggle said, "We had a great adventure in Outer Space! Ben, Robert and Darren love music as much as Fraggles do, so we had lots of fun. It would be wonderful to have them come play more music in the caves with us, but I am not sure they can fit through the hole in the floor!"

Ben Folds Five Ben Folds (piano), Robert Sledge (bass) and Darren Jessee (drums)-launched in Chapel Hill, North Carolina in 1994. The trio's high energy gigs garnering an intensely loyal fanbase, BFF signed first with an indie before a move to the majors wrought 1997's watershed Whatever And Ever Amen. A slice of pure pop perfection, the album introduced the ballad "Brick," broke the band commercially and sold more than two million copies worldwide. BFF recorded its last album, 1999's The Unauthorized Biography Of Reinhold Messner, which included the single "Army," before disbanding in 2000. (The trio reunited for a one-off live performance of The Unauthorized Biography Of Reinhold Messner on MySpace in 2008).

In 2011, the original three members of Ben Folds Five came together to record three new studio tracks for The Best Imitation Of Myself: A Retrospective, a career-spanning Ben Folds anthology. The band's magic rekindled in the new tracks, BFF launched its first tour in more than a decade to a spellbound audience at New York's Mountain Jam Festival on June 2, 2012. In the wake of the group's triumphal return at Mountain Jam, the group performed a short run of key US summer festival dates including Bonnaroo, Milwaukee Summerfest, and Old St. Patrick's Church Block Party in Chicago. BFF returns to the road this fall with a major North American tour, with dates in the UK, Ireland, and Australia to follow.
www.benfoldsfive.com

Nerdist Industries is a multi-platform creator of genre and popular culture content - a true next generation media company. Nerdist was founded in 2008 by comedian, author, podcaster, new media personality and AMC's The Talking Dead host Chris Hardwick. In 2011, Nerdist and GeekChicDaily merged to form Nerdist Industries with Hardwick serving as Founder and Chief Creative Officer and digital media entrepreneur Peter Levin, serving as Chief Executive Officer of the new company. Levin had previously co-founded GeekChicDaily with Peter Guber's Mandalay Enterprises. In 2012 Legendary Entertainment, a respected and successful creator of genre films and comics such as The Dark Knight trilogy, 300, and Inception acquired Nerdist Industries. Hardwick and Levin serve as Co-Presidents of Digital for Legendary, in a dual role with their Nerdist positions. Nerdist Industries now consists of a popular website at Nerdist.com; a premium YouTube channel with over 176,000 subscribers (youtube.com/nerdist), a top comedy/popular culture podcast network on iTunes that is also produced as a TV show on BBC America; the Nerdist News daily e-newsletters, a following of over 1.7 million Twitter fans, a book, The Nerdist Way, by The Penguin Group; a plethora of live events such as The Nerdist Podcast Live! and Course of the Force, the annual Comic-Con lightsaber relay. Nerdist Industries is headquartered at Meltdown Comics in Hollywood, CA, with additional offices in Santa Monica, CA, at The Jim Henson Studios in Hollywood, CA, and the Warner Brothers Studio lot in Burbank, CA.

Created by Jim Henson, Fraggle Rock stars a cast of five puppet creatures called Fraggles, diverse and quirky cave-dwelling creatures who live in an underground world alongside their hard working green neighbors, the Doozers, and a family of enormous Gorgs. The three very diverse but yet surprisingly similar communities learn to live and work in harmony with music, fun and adventures.

Premiering in 1983, Fraggle Rock was seen in over 80 countries in more than ten different languages. Fraggle Rock continues to enjoy a loyal international fan following. In its 96 episodes, the show encouraged an understanding and embracing of friendship and diversity and featured a unique mix of music of all genres from folk, blues, gospel, country and rock.