This Saturday, June 11, 2016 West Australian doctors will announce their enrolment of women with breast cancer undergoing chemotherapy into a new trial designed to prevent or minimise hair loss during treatment, and assess impact on patient quality of life (QoL).

The doctors are aiming to recruit 60 women aged 18 and above with confirmed invasive breast cancer who are able to receive one of the three approved chemotherapy treatments in the trial by December 2016.

According to lead Australian investigator, Breast Medical Oncologist, Director Breast Clinical Trials Unit and Vice-Chair, Breast Cancer Research Centre – WA (BCRC-WA), Professor Arlene Chan,  'Hair loss is an important physical and psychological side-effect of chemotherapy treatment. Severe hair loss is not only a physical reminder of cancer to the patient, but also to their family, friends and the outside world. 'We are therefore, aiming to reduce the volume of hair loss, and to examine the impact of hair loss minimisation from both a physical and psychosocial perspective."

The trial results may encourage more women for whom hair loss is a significant concern, to undergo scalp cooling at treating hospitals Australia-wide. 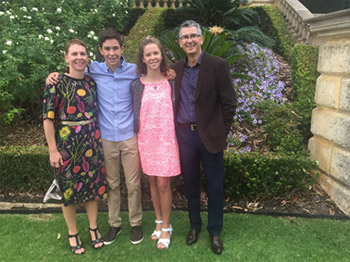 Two-and-a-half years prior to her diagnosis, Lyndal discovered a lump in her breast. After undergoing an immediate mammogram and an ultrasound performed at a breast clinic, she was assured there was no cause for alarm. So Lyndal continued to go about her life.

However, still feeling concerned for her welfare two-and-a-half years later, Lyndal sought a second professional opinion. On this occasion, she underwent a mammogram, an ultrasound and a core biopsy, and a week later, received a phone call confirming once again, she had no cancerous cells.

On the insistence of her GP, Lyndal also underwent a fine needle biopsy of the lump, 'just to be sure."

Ten days later, on November 3, 2015 (coinciding with the Melbourne Cup), Lyndal received a heart-wrenching call from her GP, who confirmed post- a second analysis of her breast lump, that it was, in fact, malignant. Lyndal was living with hormone-receptor positive breast cancer.

'When I received my diagnosis, I was scared, because it had been two-and-a-half years since I had discovered my breast lump, and I was worried about the damage that could have occurred during this period and not having received treatment any earlier," said Lyndal.

'I thought I had been vigilant, but my diagnosis clearly demonstrated how easy it is to slip through the cracks."

Seven years prior to her diagnosis, Lyndal's mother had similarly, been diagnosed with a different type of breast cancer.

'I chose to gather all of the facts and to eventually present them to my family, rather than to inform them every step of the way.

'In my mind, I mistakenly thought my breast lump was not cancerous at the time, because it hadn't grown significantly, which is why I chose not to alarm anyone," Lyndal said.

On November 10, 2015, a week after her breast cancer diagnosis, Lyndal underwent a lumpectomy.

'After my first operation, I returned to my specialist, who assured me the lump was contained, but the margins were not clear. So a couple of weeks later, I underwent further surgery to remove pre-cancerous cells," said Lyndal.

Unfortunately, following her second surgery, Lyndal was once again informed that the margins were not clear, and her specialist recommended she consider a mastectomy.

'When my specialist suggested a mastectomy, I wasn't comfortable with it at all, which is why, after Christmas 2015, I elected to change specialists, to obtain a fresh perspective on my treatment options from another breast cancer surgeon and oncologist," Lyndal said.

Following multiple discussions with her new Breast Cancer Surgeon, along with her Breast Medical Oncologist, Director Breast Clinical Trials Unit and Vice-Chair, Breast Cancer Research Centre-WA (BCRC-WA), Professor Arlene Chan, Perth, and flanked by support from her husband and children, Lyndal commenced a 12 week round of chemotherapy in January, 2016.

Before starting chemotherapy, Prof Chan recommended that Lyndal participate in the BCRC-WA's Chemotherapy Induced Alopecia (CIA) trial, designed to prevent or minimise hair loss during treatment, and assess impact on patient quality of life (QoL), as part of her treatment.

'When the trial involving the DigniCap® was recommended to me, I figured I had nothing else to lose by simply adding an extra two hours to my chemo treatment each week," said Lyndal.

'I promised my kids before undergoing chemo, that I wouldn't wear a scarf, or cover my head.

'So this trial offered me the chance to retain some of my hair, and I owed it to my children to try everything, because it would be one less thing for them to worry about," Lyndal said.

'So I put aside an extra few hours of time to have my DigniCap® treatment before and after my chemotherapy. I considered it forced downtime – a time during which I could rest, read a book, watch TV or catch up with my husband.

'I was placed in a separate room, rather than the chemotherapy room with many other patients, throughout the course of my DigniCap® treatment. I had a nurse with me all the time, and was able to have a great conversation with my husband who took time off work to be by my side," said Lyndal.

'I was draped in a blanket and wore socks throughout my DigniCap® treatment. The cap was cold – it felt like I was in the snow on a winter's day – but it wasn't uncomfortable."

Throughout her chemotherapy, the DigniCap® allowed Lyndal to retain sufficient hair to style in a short, cropped hairstyle, which people to this day, continue to complement her on.

'I had worn my hair short for some time anyway. So at no stage during the treatment process did I feel self-conscious about losing my hair at all. To the contrary, I had friends and acquaintances who complimented me on my hair.

'When I went to the hairdresser to have my hair cut while I was on the trial, he said I had retained a lot of hair at the front of my head, and my hair was even across the back, and not patchy at all," Lyndal said.

'Participating in the CIA trial has been a very positive experience for me.

'The treatment wasn't painful at all, and I felt self-confident being able to retain much of my hair during gruelling chemotherapy," said Lyndal.

'Importantly, at no stage throughout my 12-week-long chemotherapy treatment, did I ever feel like I needed to cover up, or wear a wig. I was very happy to go anywhere with my short hair."

Lyndal considers her participation in the CIA trial a success.

'I had a lot of success with the CIA trial – it was an amazing process. No one, including myself, could quite believe just how much hair I was able to retain. Fortunately, my participation in the trial meant the potential for loss of hair just didn't figure into the whole chemotherapy treatment process. So it was one less thing to worry about.

'Most of the hair that I did lose, fell during my first round of chemotherapy treatment. After that, my hair loss was minor – just a few stray hairs here and there," Lyndal said.

Lyndal maintains she is now faring well. She completed her participation in the CIA trial and her chemotherapy on April 5, 2016. After speaking to her breast cancer surgeon, oncologist, family, friends and other breast cancer survivors, Lyndal has since chosen to undergo a double mastectomy, followed by a breast reconstruction on May 19, 2016.

'I've chosen to have a double mastectomy, rather than a single mastectomy, because I don't want to have to deal with the possibility of undergoing chemotherapy again. I won't have to experience double the pain, or double the recovery. I can just get it done all at once."