In November 2018, there was a shooting at the Borderline Bar in Thousand Oaks, CA. The next day, the Woolsey and Hill fires broke out, burning over 96K acres of Southern California. People who were still wrapping their heads around losing 13 of their neighbors in the shooting were now having to pack up whatever they could to evacuate the fires that were rapidly heading their way. One of these nearby residents was Americana singer, Arielle Silver.

After these tragic events, Silver began to think about what really matters most when you are facing a tragedy and from that, her latest single was born. The video and single for "What Really Matters" is out now.

Arielle Silver: A music-writer friend described my songs as "the heart of Laurel Canyon, the pulse of Americana, and the soul of the Chelsea Hotel."

Though I don't think my friend knew my geographical biography, I'm tickled by how she captured the "Southern California – northeast – belly of the bible belt" stew of influences on me. Place is important. I'm a southerner by birth, a Yankee by education, and a west-coaster by lucky chance. On a daily basis, my mind flits through sensory memories of all those places. The muggy air and clay mud of Tallahassee. The concrete, wool layers, and skylines of New York and Boston. The wildflowers and wildfires of Los Angeles.

And the rootsy songwriter venues in all those places. The front-stoop jams. The pubs and cafes. The folk festivals. The way poetry and song and literature and conversation intermingle. The way concerts are for connection. Performers are not just "performing" but facilitating conversation. I don't know if I'm a "folksinger," but I think of my music as "folk" in this way.


Question: Can you tell us about what inspired your new single and video for "What Really Matters"?

Arielle Silver: The song emerged the week of the tragic Thousand Oaks shooting, which was also the week California erupted in devastating and catastrophic wildfires. Within two days we had the shooting, the Camp Fire that ultimately destroyed Paradise, and the destructive Woolsey and Hill Fires down here in Los Angeles and Ventura counties. California experienced enormous loss of lives and property over a very short time.

With tangible loss comes loss on abstract levels too: a sense of security, an emergence of fear. And with all of that comes an important reassessment of what really matters.

This sense of "what really matters" is coming into even starker relief during the current COVID-19 global crisis. What really matters when we're pulled away from each other? I value my time alone, but now that it's a mandate, I see more clearly how important it is for daily connection with friends and community. A few days into the quarantine I realized that it really matters to my mental health that I walk or run outside every day. Of course, if the parameters temporarily change, I'll adapt, because what really matter is the safety of my family and community.

So the song "What Really Matters" is about re-examining what is important. We kick and scream when we have to let go of nearly anything, but this is a song about clarifying values.

Arielle Silver: What I hope listeners take from my songs is a sense of radical acceptance of our shared humanity. I'm trying to honor the idea of wholeness over perfection. Perfectionism requires rejection of parts of ourselves. It's arbitrary and unhealthy the way we deem some aspects of ourselves as worthy of keeping and try to erase or bury others. We are multi-faceted creatures, not computer-generated.

Arielle Silver: Actually, writing is my bullseye-favorite. I love the songwriting process. It's not necessarily "fun" but it's deeply satisfying to me.

I don't always love performing, but the thing that gets me to the stage is that I love connecting with people, sharing songs, and seeing in their eyes when something resonates with them.

As for recording, it's a strange magic that happens in the studio. My new record was entirely voodoo and pixie dust. I am in awe, admiration, and fear of whatever witchcraft made everything come together. In reality, I suppose the record is a combination of the strongest creative and experienced parts of all the people who were involved. It's bigger than anything any one of us could have done.

Arielle Silver: My favorite song to perform is usually one I've either most recently written, an oldie that feels fresh because I just dug it up, or a song that I've just released. That said, performing on screen for virtual concerts is definitely different from live in-person concerts. I can't see in real time how people are responding.

But regarding performing a newly-released song: I've been uncovering layers of "What Really Matters" and the next single, "Headlights," that I hadn't thought about since the writing. Time is changing how I see them, and for that reason, performing them has changed. In light of the COVID-19 crisis, I'm thinking about "What Really Matters" in new ways.

Arielle Silver: My dad's actually never seen me play a show, nor have my siblings. Now that you mention it, when live concerts come back, I want to make sure I play near where they all live in Florida and Georgia. 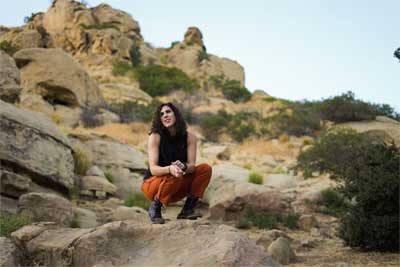 Arielle Silver: The Indigo Girls played a Facebook Live streaming concert last week for a worldwide audience of 50,000. I haven't seen them play in ages. When they sang "So we're okay, we're fine / Baby I'm here to stop your crying," I just started crying and didn't stop for the rest of the afternoon. Since the COVID-19 quarantine started, it seems songs have been making me cry more than anything else. I went out for a run the other day and listened to Paul Simon's "An American Tune." By the 2:30 mark, I had to stop running for the tears. Honestly, normally I listen to a lot of songwriters, but these last two weeks, classical music, podcasts, and audio books have been safer territory.

Arielle Silver: It comes back to the idea of a song, which has its roots in my childhood home, where my dad would sing Harry Chapin and Joni Mitchell. I've been writing songs since I was a teen, but my interest in the industry – the interconnected parts of songwriter, artist, promoter, etc. – itself arose only within the past decade or so, and that came directly from my own experiences as a performing songwriter.

Arielle Silver: More than anything, I'd love to co-write with some of my favorite songwriters -- Lori McKenna, Chris Stapleton, and Dan Wilson are ones who are always on the top of my mind. It would be a fascinating experience to be inside of a song with them.

Arielle Silver: Anything worth doing is going to have no end to challenges. Right now, my particular challenge has to do with how everything suddenly and radically shifted in this global health and economic crisis. I should say first that this in no way is meant to dismiss the harrowing crisis itself. Many people are sick and dying right now from COVID19.

But in my daily life, sheltering in place in my home, with no one in my house sick (knock on wood, as my grandma would say), I am trying to shift my vision of a career as an independent singer-songwriter. As an indie artist, the good news is no one else is coming. The bad news, of course, is that no one else is coming.

Arielle Silver: Coffee first, and journaling. I sing and do vocal exercises in the shower, which always seems to set me in a good mood. Right now, in quarantine days, I have a daily morning Zoom call with a group of musicians, where we talk about our current projects and keep each other accountable. I'm on mute for most of the call, so typically do guitar scales and finger exercises while others are talking. After, I'm on to whatever other work I have for the day – writing, practicing, rehearsing, business admin stuff, emails. I also teach yoga (right now online) and am faculty at a college, so on a typical day there are classes and meetings for both of those things.

Arielle Silver: There's a beautiful feeling when you write a line in music and words that truly expresses something meaningful. It's like pressing on a bruise – it hurts, but there's some relief about knowing exactly the depth and shape of it.

And then there's that moment when you sing that line in your song and you can see in the eyes of the listener that they feel the exact resonance of it. That's everything to me.

Arielle Silver: After "What Really Matters", the second single from the album is "Headlights." It's upbeat and uplifting. Lately the lyrics of the chorus have been comforting to me, so I'm looking forward to sharing it with others. The album comes out this summer.