Bellvalaire recently dropped the single, "Elastic," a high energy single about the all too common highs and lows of a rocky relationship. She was the lead guitarist of the all-female Guns 'n Roses tribute band, Paradise Kitty, and can often be seen combining her aerial hoop routines with guitar playing which led to her creating an act called "Shrednastics" which first debuted on ABC's "The Gong Show."

To Ariel Bellvalaire, the electric guitar isn't just an instrument. It's her muse and motivation. It's her heart and soul. The guitar is also what puts her own rock twist on pop music. Think Avril Lavigne with a hint of Van Halen.

But it's her high- energy performance, aerial gymnastics, and shredding creativity that makes Ariel like no other artist you've seen. The girl from the quiet town of Windsor Connecticut, has been making a lot of noise around the world as a solo artist, lead guitarist and singer for the Michael Jackson "I Am King Experience," and as the lead guitarist of the all- female Guns 'n Roses tribute band, Paradise Kitty.

Coming from a gymnastics background, Ariel is also an accomplished aerialist and can be seen combining her aerial hoop routines with guitar playing which lead to her creating an act called "Shrednastics" which first debuted on ABC's "The Gong Show." Beyond her impressive musicianship, Ariel showcases her songwriting on her forthcoming album. Songs like "Elastic" show off her catchy pop melodies and storytelling lyrics.

Ariel Bellvalaire: My music combines my love of pop vocal melodies with my love of guitar centered rock n' roll music. Some people describe it as "Avril Lavigne with a hint of Van Halen!"


Question: Can you tell us about Elastic?

Ariel Bellvalaire: There is no right or wrong way to do music. Your creativity is completely up to you! If you want a song about a hard relationship that has upbeat music behind it, great! If you want to combine multiple interests like gymnastics and guitar playing, DO IT!!! Be yourself! 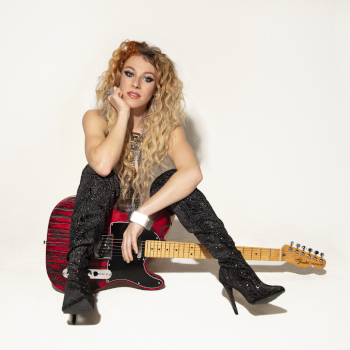 Ariel Bellvalaire: For me personally, I identify as a performer first and foremost. Nothing gives me a thrill like being on stage and entertaining people! Recording is fun and productive but it will never be the same as releasing my inner rock n' roll entertainer side!

Ariel Bellvalaire: As far as original songs go, "Elastic" is definitely my favorite! It is completely guitar driven from the get go with catchy melodies that are fun to sing. I can truly let go and perform this song! Most importantly...THE GUITAR SOLO IS EPIC! It's so much fun to perform and always gets the crowd going! For cover songs, my favorites will always be "Sweet Child 'O Mine," "Crazy Train," and "Beat It" for the simple reason that I love playing the guitar parts and solos as well as singing those great melodies!

Ariel Bellvalaire: Currently I'm on a 1975 kick! I love The 1975 for their funky guitar parts and amazing vocal melodies. If you couldn't tell, I'm all about featuring electric guitar into modern day music.

Ariel Bellvalaire: When I was younger, I wanted to be Avril Lavigne. I was so inspired by her alternative grungy sound and all around vibe which really shaped my original music to where it is today!

Ariel Bellvalaire: I would really love to collaborate with Avril Lavigne and Ozzy Osbourne. Both of them were major influences that made me the musician I am. Avril for her pop rock sound and Ozzy because of his incredible rock songs that got me into playing guitar! I owe the guitar playing to Randy Rhoads but it was my curiosity of Ozzy Osbourne that made me listen to rock in the first place.


Question: Tell us about your experience as the lead guitarist and singer for the Michael Jackson "I Am King Experience"?

Ariel Bellvalaire: I loved touring with the Michael Jackson "I Am King Experience!" Michael's songs are so timeless and the musicianship will always reign supreme. Being able to perform such iconic songs on stage while traveling the world was truly an amazing experience. The incredible thing is, no matter how much you play those songs, they never get tiring and there are always guitar parts to continue working on.

Ariel Bellvalaire: Like most young artists starting out, I had the idea that in order to make it, you had to "get discovered." Working in the industry for years, I quickly learned that nothing happens by chance. You have to work incredibly hard at your craft and continue to put yourself out there constantly! You may get "discovered" but it's not by chance! You will be seen for the work you put out there!

Ariel Bellvalaire: I am proud to say my typical days are productive and busy. I like to get up early, do yoga and hang out with my pets to start out the day and then jump right into my practice routine where I'll work on something to improve my guitar playing, vocals, and performance daily. I like to make daily to do lists that come up with ideas I can do everyday to get closer to my career goals.

Ariel Bellvalaire: By far, my favorite part of being a music artist is performing and inspiring people with my love of guitar, music and the stage. When people enjoy my performances, it fuels me like nothing else!

Ariel Bellvalaire: I am so excited about releasing my original music and cannot wait to perform on tours of my own! I absolutely love playing with other musicians in their shows but I am definitely ready to take the stage with my solo career!