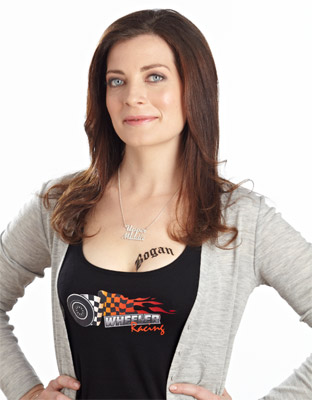 Question: What drew you to audition for the character of Bess Denyar?

Annie Maynard: The process was familiar; I read through a couple of the scripts from the episodes for context and I knew I loved it; it is so moving and hilarious at the same time. Although it's quite hard when you audition because you fall in love with the character, but there is a lot of rejection so I braced myself for that. I did my first audition and I was really nervous and I thought -I stuffed that up' (laughs) and miraculously I got a call back and in that call back I read with Patrick Brammall who plays my husband in the show, he'd already been cast as the part had been written with him in mind. Patrick Brammall was my reader in the audition and I'd worked with him before and we have a natural banter and that made me a bit more comfortable in the audition room when meeting Robyn Butler and Wayne Hope.

When I got the call, I honestly feel off the bed! I couldn't believe it.


Question: Are you able to relate to the character of Bess, in any way?

Annie Maynard: Bess Denyar is a little more neurotic than I am (laughs) but I have my fair share of self-doubt especially when it came to being involved in this project with so many amazing people who I've grown up watching on television and because of that I could relate to that aspect of her neuroticism, I suppose. I come from Adelaide and in Adelaide we really know how to embrace both the bogan and the posh (laughs)!


Question: How would you describe the show, for Aussies who have yet seen Upper Middle Bogan?

Annie Maynard: I think Upper Middle Bogan is quite a unique show; when you look at the title you think it will be a satirical comedy however Michala Banas and I were talking, this morning, and she was saying someone described Upper Middle Bogan to her as -Modern Family meets Sylvania Waters'. It has a lot of affection, warmth and hopefully a lot of depth to it as well as the really funny moments. It's not a heightened stereotypical comedy it's more naturisms.

Annie Maynard: Upper Middle Bogan is a family show, if you do watch it with kids you do have to know there is going to be a little bit of swearing from Amber but apart from that it is a show that appeals to a lot of people, hopefully!


Question: What scene did you find most difficult to shoot, in Upper Middle Bogan?

Annie Maynard: It depends what you mean by most difficult… There are a lot of scenes that I felt difficult because I couldn't get through them without laughing and anytime there was a honk from my husband, Danny that would set me off laughing. The hot lap was probably the hardest one, that was an amazing day and I got to Calder Park Raceway in Melbourne and they put me in a V8 Supercar and they wacked the stunt driver in and said 'you're just going to do a couple of laps, so you know how it works" and they didn't tell me, but they'd told him to go as fast as he could and they were recording me and they had me absolutely freak out and when it was my turn to drive, very little acting was required as I was being myself and freaking out! It was excellent and I really did embrace my bogan after that.


Question: How would you describe Bess Denyar?

Annie Maynard: Bess Denyar is a doctor with two twin children and a lovely husband who is an architect and they live in a lovely home in a town similar to Brighton, of Melbourne. Bess is a hypercondriac which comes from the sense that she never felt like she really fits in, quite anywhere as something in her life, doesn't feel right. Bess has quite a conservative, judgemental and overbearing mother, Margaret played by Robyn Nevin who is hilarious in her own right.

When Bess discovers that she is adopted, it makes a lot of sense to her and then there is a phase of trying to fit in and make this world combine to make her whole.


Question: What was it like working with Wayne Hope, Robyn Butler and Tony Martin?

Annie Maynard: Tony Martin is a legend, he is great! There are so many people who I grew up watching and idolising on TV. On the first day of rehearsals Glenn Robbins offered me his chair and I couldn't speak! Tony Martin is an icon of Australian comedy and he is a dear man, he is the kindest, gentlest man! Robyn Nevin is an astounding actress and Australian icon, as well. I was very lucky and I kept wondering when I was going to be fired, really… (laughs)!


Question: Why do you think Aussie loved and will love Upper Middle Bogan?

Annie Maynard: Upper Middle Bogan has been lucky enough to resonate with a really broad cross section of people and I think because it's not a condescending show (it's not poking fun at privilege or bogans) it's a gentle look at class in Australia which we are not that comfortable with. It all comes back to the writing; there is nothing in the show that isn't beautifully crafted, down to the punctuation point, by Wayne Hope and Robyn Butler. The DVD of Upper Middle Bogan has some great outtakes and some moments where Wayne Hope wouldn't say cut and he'd let us keep playing and amusing ourselves. I think some of the fun from set comes across when you watch the show, you can see we're acting enjoying it. Hopefully in those moments, as an actress, are quite moving to be involved in, such as being reunited with my birth family, for the first time, the sincerity comes across, as well.

It is very Australian to not be too serious!

Annie Maynard: I have done a little bit of work on Puberty Blues Season 2 and a little bit on Rake which will be released in 2014 on the ABC. I'm also going to have a baby in February. 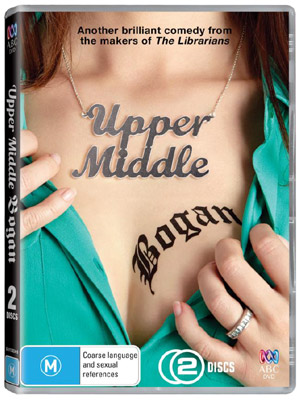 From the creators of The Librarians and Very Small Business and directed by Wayne Hope and Tony Martin, when an upper middle class woman discovers she is adopted she is shocked to find out she comes from a drag racing family in the outer suburbs.

When Bess Denyar (Annie Maynard), a doctor with a posh mother (Robyn Nevin), an architect husband (Patrick Brammall) and twin 13-year-olds at a private school, finds out that she is adopted, she is stunned. But even more so when she meets her birth parents – Wayne (Glenn Robbins) and Julie Wheeler (Robyn Malcolm).

If that's not enough to digest, Bess also discovers that she has siblings – Amber (Michala Banas), Kayne (Rhys Mitchell) and Brianna (Madeleine Jevic).

The Wheelers head up a drag racing team in the outer suburbs, and are thrilled to discover the daughter they thought they had lost.

Phoebe rated the DVD "Annie Maynard Upper Middle Bogan DVD Interview" 10/10 Stars on Femail.com.au. i love her she is so funny