Christmas is 'The Best Day of the Year"

Country music superstar Amber Lawrence will release her new kids album just in time for Christmas! Aussie Aussie Christmas will get all the kids singing and dancing around the barbeque with these distinctly Australian songs.

'Christmas is 'the best day of the year", and with the arrival of more nieces and nephews in my life, it just gets better every year for me. So I wanted to celebrate that with an album of uniquely Australian Christmas songs. I wanted to make music that will become a part of the great Aussie backyard family Christmas! It was a heap of fun to write, record and perform these 11 brand new songs!" said Amber Lawrence.

Over the past three years, Amber Lawrence, Golden Guitar winning artist, has successfully created an alter ego – in the form of her -Kids Gone Country' character. With the viral success of -My Big Mack Truck', 'In My Belly' and -My Grandma' and great sales of her first kids album, Amber is back and set to release the next chapter, Aussie Aussie Christmas.

In fact, -My Big Mack Truck' clocked up over 1.3 million video views on social media with a big reach and reaction in the US, UK, Germany, Norway and Switzerland.

The Christmas album features 11 original songs specifically detailing an Australian Christmas. There's the fun – -Aussie Aussie Christmas', -Swimming pool', a bluesy tune, featuring a kazoo solo-I like Christmas', a song featuring animals at their -Animal Christmas Do' and many more. There's even an autobiographical song – -My Aunty is the Fun One on Christmas Day'.

Make no mistake, this album is not just for kids. It's a feel good Christmas album, that will make you feel proud of the unique way we Aussies celebrate Christmas, make you laugh and no doubt make ex-pat Aussies feel homesick. Not to mention the real reason, keep the kids happy, just like -Kid's Gone Country' has done.

Amber will do a series of Christmas shows during November and December showcasing this album. Keep an eye on Amber's website and socials for further information. 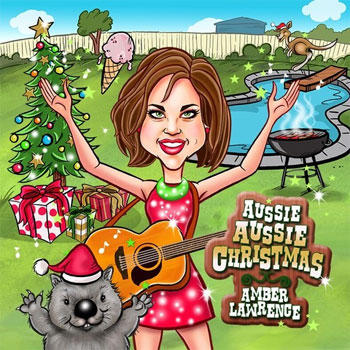 Question: How would you describe Aussie Aussie Christmas?

Amber Lawrence: It's an album of all new, Australian Christmas songs including fun songs about a backyard, Aussie Christmas. Songs that are easy to sing along to and describe every Aussie kid's Christmas. Question: What inspired you to create a Christmas album?

Amber Lawrence: I released my first kids album last year and I wanted to follow that up this year - and since I love Christmas so much, I thought what better way to combine the two!


Question: Can you talk about the motivation behind the original songs?

Amber Lawrence: They are all songs inspired by my childhood Christmas, lots of swimming, slip and slides, eating pavlova, sausages on the BBQ, family, travelling between Christmas day destinations and presents, of course!


Question: Is the Aussie Aussie Christmas album suitable for all ages?

Amber Lawrence: Oh yes it sure is, although it's technically a kids album, it's really an album for the family to sing along to during the lead up to Christmas. Have it on in the background when you're wrapping presents, making pavlovas or dancing around the Christmas tree!


Question: What was it like filming the video for Aussie Aussie Christmas?

Amber Lawrence: This was the most fun I've ever had on a video shoot. We shot the video in October, but lucky it was such a hot day, that it actually felt like summer, and we recreated Christmas in every detail - from the presents, to the food, to the water bombs! We just had the best day! Watch it here.


Question: Why is Christmas your favourite time of year?

Amber Lawrence: I love Christmas because everyone has time off work, time off the stress of life and its summer! I love spending so much time with my family over those Christmas days, and I love going to the beach, and eating too much food!


Question: What's a typical Christmas day like, for you?

Amber Lawrence: I wake up, head down to the beach around 7am and dive in for a Christmas day swim… then by 9am I'm off to my sister's house to meet up with my sister, brother, sister in law, brother in law and my mum and my nieces and nephews for the first round of Christmas presents. By 1pm I need to be at my Uncle Peter's house for the big extended family celebrations. This year there will be around 40 members of my family. My uncle has a big pool, so there will be lots of swimming races, diving competitions and maybe a game of cricket! We eat lots and take lots of photos! By about 6pm it's all over and I head home for leftovers and to watch the Christmas movie!


Question: Which was your favourite song to record for Aussie Aussie Christmas?

Amber Lawrence: Oh i love the Animal Christmas Do - as we had so much fun picking all the noises for the animals to make. Could you imagine that Christmas party!

Amber Lawrence: Next year I'll be touring a lot in the first half of the year, and then writing songs to record for my next album !