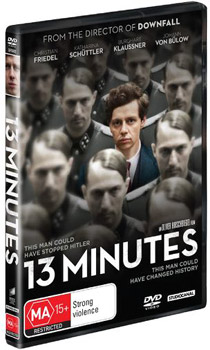 13 Minutes is the shuddering true story about the fatal, powerful and heart wrenching time during Hitler's reign, and the man who tried to assassinate him. From the director of Academy-Award® nominated Downfall comes the gripping story, of an ordinary man who carries out an extraordinary pursuit.

It's November 1939 and German Nazi leader Adolf Hitler (Udo Schenk, Don't Look For Me, Gruber's Journey) is at the peak of his reign, having just announced his annual speech when a bomb explodes and kills eight people. Meanwhile, a mysterious man is arrested on the Swiss border for possession of suspicious objects. That man is Georg Elser (Christian Friedel, Amour Fou, The White Ribbon), a strong-willed Catholic carpenter from the country, whose bomb has just failed to assassinate Hitler by 13 minutes. Held in custody, Elser soon realises that his attempt at the dictators' life has devastatingly failed.

During his torturous confinement, Elser is forced to reveal his captivating confession about how a seemingly nonpolitical man came to breaking point and the series of events that lead up to his drastic plot. It soon becomes evident that his daring beliefs affected not only his life but also his relationships, especially with the love of his life, Elsa (Katharina Schüttler, Amour Fou, Carlos).