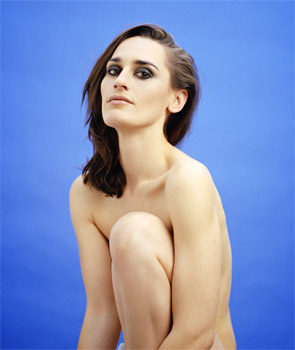 Comprised of band mates Yelle (Julie Budet), GrandMarnier (Jean-François Perrier) and Tepr (Tanguy Destable), Yelle have been making their distinct Euro Electro-pop tunes since 2007. In 2010 the band caught the attention of Dr. Luke who has signed the trio to his label Kemosabe Records and produced the forthcoming album, Complètement Fou.

Yelle's third long-player will be released on the hit-maker's own Kemosabe Records through Sony Music Entertainment Australia on September 26, and the team-up makes a lot of sense. Collaboration was new territory for Yelle, but it was clearly the perfect path forward to advance the bouncy, synthesizer-rich sound of 2011's Safari Disco Club.

Though these Frenchies may not have one of the household names we're used to seeing next to Dr. Luke's handle (Katy Perry, Robin Thicke, Britney Spears), they've long possessed an originality of voice and strength in song writing that transcends whatever their trappings. Of course, they see it a bit differently. "We just do things we love," says Yelle, née Julie Budet. "This is the only rule we have. At the end of the day this is what makes YELLE: spontaneity."

Since 2007, French electro-popper Yelle has risen to be a leading lady in the world of European pop music. With a keen interest in fashion and feel for popular culture, she's been able to take her quirky sound from her French roots to the world at large, playing some of the biggest festivals and farthest flung cities. YELLE's music has been described as a an infectious sweet and sour pop cocktail and the band's last release 2011's SAFARI DISCO CLUB was met with massive critical acclaim.

It is hard to think of another current artist who has managed to go global the way YELLE has. Having already released two albums and performed countless live shows around the world, all the while singing in their native French language, is evidence that YELLE's beautifully melodic compositions translate regardless if fans have any idea what she is actually singing about.