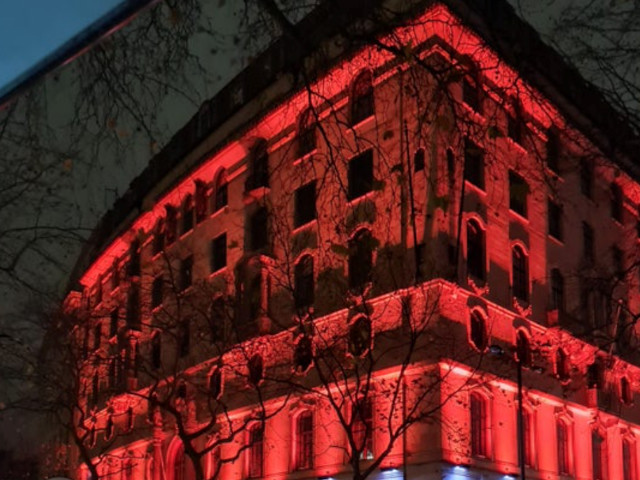 Landmarks across Australia are lighting up red – the colour of our larynx – on World Voice Day 2022 (April 16), to shine a light on voice disorders (dysphonia). The goal of the campaign spearheaded by the Australian Dysphonia Network (ADN), is to bring attention to the human voice, to start conversations about voice health and dysphonia and to symbolise the need to value our voice in the same way we value our vision and hearing [learn more with this short video: "The Value of Voice"].

Chronic dysphonia can develop for a number of reasons. It can be the result of damage to the larynx; underlying health conditions; overuse or poor vocal technique, or it can be a standalone neurological disorder like Spasmodic Dysphonia. Whilst rare, spasmodic dysphonia is thought to affect 1 in every 100,000 people in Australia including singer Jenny Morris. International celebrities like Robert F. Kennedy, Jr. and Scott Adams, the creator of "Dilbert," have also had their lives and careers impacted by the condition.

Spasmodic dysphonia is akin to an eye twitch, caused by a spasm of the muscle around your eye. For someone with spasmodic dysphonia, they have a very similar spasm but in a muscle in their larynx causing the voice to sound gravelly, crackle, sound breathy or drop out completely while speaking, and making communication difficult.

Vocal function is very often taken for granted. Most Australians will relate to the frustration of having lost their voice at some time, usually after a big night out, belting out your go-to karaoke songs or cheering at a football game, but for those with dysphonia, that frustration is a permanent way of life.

Approximately 30% of occupations in modern societies are voice dependent. This includes performers, teachers, salespeople, politicians, lawyers, to name a few, so the impact of dysphonia is life changing. It can ruin careers, relationships and lead to depression, yet it is often poorly diagnosed and frequently misunderstood. The Australian Dysphonia Network is using World Voice Day and their 'illumination campaign' to shine some light on voice disorders in the hope of gaining better understanding of those affected.

Established in 2016, the Australian Dysphonia Network's (ADN) purpose is to support people whose lives are impacted by a voice disorder with the Network run by people who either live with a voice disorder, or have a close experience of supporting someone who does.

World Voice Day was founded in Brazil back in 1999 with the aim of drawing attention to the science and phenomenon of voice production. It soon grew to highlight the significant role that the voice plays in every aspect of our daily lives. World Voice Day has gained momentum across the globe, and currently over 50 countries join the annual celebration.

Visit www.australiandysphonianetwork.org for more information. Donations for the not-for-profit charity, can be made here.

Below is a list of the Australian landmarks that are being illuminated for World Voice Day: