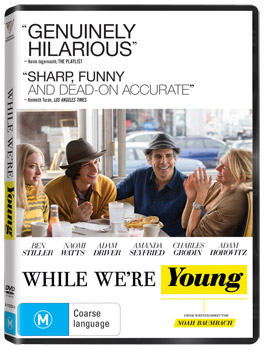 Josh and Cornelia Srebnick are happily married middle-aged members of New York's creative class. They tried to start a family and were unable to – and have decided they're okay with that. But as Josh labours over the umpteenth edit of his cerebral new film, it's plain that he has hit a dry patch and that something is still missing.

Enter Jamie and Darby a free-spirited young couple, who are spontaneous and untethered, ready to drop everything in pursuit of their next passion – retro board games one day, acquiring a pet chicken the next. For Josh, it's as if a door has opened back to his youth - or a youth he wished he once had.

In the film -While We're Young' by director Noah Baumbach, a middle-aged couple (Ben Stiller and Naomi Watts) find themselves caught up in the lifestyle and ideals of a young hip Brooklyn based couple (Adam Driver and Amanda Seyfried). Confronted with an age gap, the two generations inevitably clash with comedic proportions.

Though nothing like her new-agey character Darby, actress Amanda Seyfried does have a sweet captivating quality which has garnered her a few girl next door roles. But scratch the surface and you immediately get a sassy young woman who is at once mature and seasoned, but can curse like a sailor while hanging with the boys. It's this confidence which sees Amanda take on some interesting roles, including a stint on Broadway, in the coming year. Casual and honest, Amanda talks to us about playing against powerhouses like Ben Stiller and Naomi Watts, what it's like to be older than her ingénue image and the trappings of being a social media celeb.


Question: It feels like director Noah Baumbach might be making a commentary about cross-generational ideals, did you read it as kind of mocking millennials?


Question: What's it like for you to be in a city where it almost seems to be Ground Zero for all this crazy hipster movement and how it's filtered onto the rest of the world

Amanda Seyfried: I feel very comfortable walking around New York. I feel like I belong and everybody is so different and I also live at NYU so there's a lot happening. I feel like there's a lot of 'hipsters" but I think that's just a frame of mind. The Brooklynites that I know are very ecologically sound and are low-maintenance and thrive to have this kind of natural lifestyle. But when I look at that, I don't feel that they are putting it on, it's just the lifestyle that they want. It's a lifestyle that I want! I mean, I go on Etsy almost every day and try to find things that people are creating out of their homes!


Question: Being an actor it's almost like you have this great ability to kind of play act for a living. Does this career allow you to still feel like a kid inside?

Amanda Seyfried: Oh my God, of course, all the time. Especially in this movie, I am the youngest version of myself. I am the most manic version, and that all exists in me, but it's safe. I can really collect all that energy and put it into one thing and it feels so good and there's no consequences. But in terms of generally as an actor, yeah, play acting, it's so fun, it makes me feels so young and I get to use that part of me all the time. In real life, I kind of have to put on my adult hat which sucks sometimes, but totally needed in order to evolve. But yeah, I think there's something about actors, we just don't want to grow up in some way.


Question: But yet, at a young age, you have been surrounded by people who are much older than you, so when you are around people like that, what do you kind of gauge from them, cause you get a vision of what being an adult is like early on when young people probably that age probably never had to think about that.

Amanda Seyfried: You know, it's funny, I never feel like I am an adult, because I was already around them. I started working professionally when I was fifteen, so I guess I never felt like I am getting there, I am never a part of it. I was always the youngest person in any room, so now I am always shocked to find out someone is younger than me, especially because I am going to be 30 this year, so it's a weird thing.


Question: Do you remember the moment when you realized that you were the oldest person in the group?

Amanda Seyfried: I don't know, I don't remember exactly, but it happens quite a bit now. Did you know that there are 24 year olds walking around? What the fuck? I don't remember, but I know it will happen so frequently now. So it's really interesting. Also, a lot of my friends are in their 40s, and some in their 50s. Nothing about me is ageist and they don't treat me like I am younger and I don't treat them like they are older. We all kind of get along.


Question: How did you break down Darby in your mind?

Amanda Seyfried: The thing with Darby is, she just is like very whimsical and very carefree and she kind of just goes by the beat of her own drum and is not insecure. I think it's because she doesn't worry about anything and she's new age-y, kind of like, things will happen as they happen. And she doesn't need to be stoned to feel that way. She just lives on a different plane a little bit, and it's nice because she knows it will figure itself out.


Question: But yet, she's helping her husband Jamie (Adam Driver) plot this kind of entrée into a world that he wants.

Amanda Seyfried: I think it's so much simpler for her. I think she just loves (Jamie) and gets it and wants him to succeed, and forgets herself. The problem with Darby is, she half commits to things and she's a fraction ambitious. Compared to Jamie, he's on another scale. She likes to be a part of the process. I can relate to that for sure, I am not ambitious as a lot of my friends are and my peers.


Question: There is this interesting theme about millennial entitlement that Josh (Ben Stiller) sees with Jamie. How do you feel about that?

Amanda Seyfried: I don't relate to that. It's a big conversation. Is access to the internet and all that information why everybody feels so entitled? I mean, can everybody have a part in changing the world and making it better, yeah absolutely. But what are you entitled to, is everything fair game? I don't know, I wouldn't be good at articulating that.


Question: Adam Driver plays your husband in this film. What was it like to work with him?

Amanda Seyfried: It's really interesting to work with him because there's no speck of dishonesty. I don't think he has a method or a technique, I am sure he does, but he doesn't put it out there and he's just right there with you, it's really cool. Things can really happen when you are working with an actor like that because there are no distractions and you know whatever your intention, things can just go wild in a scene with him, you never know what is going to happen.


Question: You have many scenes where it's you, Ben Stiller, Naomi Watts and Adam, those must have been fun days to shoot.

Amanda Seyfried: That scene in the Chinese restaurant where it was just the four of us, it's really great, it's really easy to work with them because things can pop up. Plus the writing, you cannot change Noah's words, you have to say everything as it's written because there's a very specific reason that it is all written that way and there's a rhythm. So of course, I am not going to ad-lib anything, but even with these actors, the energy changes all the time, we are all very open to whatever happens and it's really easy. Not just easy, it was just fun! We are all play acting and there was nothing too serious about it, and Ben and Naomi are fucking cool. The four of us have a good time and I don't know, I just wish there was more to shoot, wish we are doing a sequel. Could you imagine? What if this movie was a huge hit?


Question: I can see a sequel. I feel like it's the adventures of Darby.

Amanda Seyfried: I hope there's a sequel, I really do.