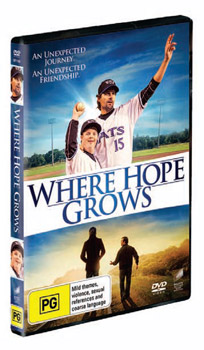 When a baseball player's professional career is cut short following some personal problems, it takes a special young man to bring him back from tragedy. Where Hope Grows tells a story of loyalty and friendship, as told through an unlikely bond between an athlete and a local grocery store worker with Down Syndrome.

Calvin Campbell (Kristoffer Polaha) is a former professional baseball player sent to an early retirement due to his panic attacks at the plate. Even though he had all the talent for the big leagues, he struggles with the curveballs life has thrown him. Today, he mindlessly sleepwalks through his days and the challenge of raising his teenager daughter. His life is in a slow downward spiral when it is suddenly awakened and invigorated by the most unlikely person – Produce (David DeSanctis), a young-man with Down syndrome who works at the local grocery store.

Calvin slowly loses the chip on his shoulder as he begins to experience the world through Produce's eyes. Faith, work, purpose and most importantly family, blossom into Calvin's life as their friendship develops. The unlikely pair becomes intertwined giving Calvin's life new meaning and purpose, but unfortunately leads to tragedy due to single decision echoed from Calvin's past.

Starring Polaha (Ringer, Life Unexpected), Danica McKellar (The West Wing, The Twilight Zone), Kerr Smith (My Bloody Valentine, Final Destination) and Brooke Burns (The Chase, Shallow Hal), Where Hope Grows weaves a tale of relationships, support and family ties through a heart-warming story of seeing life through other's eyes. With a notable breakout performance by DeSanctis (Home & Family), Where Hope Grows is a story of finding redemption through faith, hope and love.