What Will Be Worn 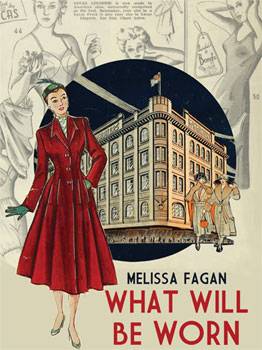 Sometimes it seems the most invaluable stories can be found in the unlikeliest of corners.

For all who know Brisbane, McWhirters, a once celebrated department store in Fortitude Valley, is an icon. For Melissa Fagan it is also the starting point for this remarkable exploration of her mother and grandmother's lives, and a poignant reminder of the ways in which retail stores and fashion have connected women's lives across decades. Behind the dusty shop counters of an Art Deco treasure, Fagan discovers both what has been lost and continues to shine. Ultimately this tender exploration of self and family, so exquisitely written, speaks of the ways in which life so often surprises us and of how the legacies of others can truly enrich our own relationships and lives.

Melissa Fagan is a writer and editor based in Brisbane, where she also teaches and lectures in creative writing courses at the University of Queensland and QUT. Her fiction and nonfiction has been published in Overland, Kill Your Darlings, Meanjin, QWeekend and others. At various times throughout her life (but mostly pre-21st century) she has worked as a receptionist, data entry clerk, call centre operator, market research telephonist and editorial assistant. She has also taught swimming and horse-riding, and led tours through South East Asia, In 2018 she started a practice-led PhD in travel writing with Curtin University and the University of Aberdeen.

Question: What inspired you to write What Will Be Worn?

Melissa Fagan: The initial inspiration came via my grandmother, Joan McWhirter. I realised on the night of her funeral that she had lived a much more complex and interesting life than I had ever imagined – it was too late to ask her about it, so the only way to answer the questions that I had was to write about it. And so the book is an attempt to understand what her life was like before I knew her. But over time it became more my mother's story – how the decisions her mother made impacted on her life, and mine.


Question: What was most difficult about writing it?

Melissa Fagan: My grandmother married into a well-known Brisbane family, the McWhirters, who started a business that became a well-known department store, so I felt a kind of duty to write in some ways about that legacy. This means that the story spans close to 150 years. I knew from the outset that I didn't want to tell it chronologically but finding another way to do it was a challenge. I eventually structured the book around my own attempts to tell the story, with a few detours along the way, taking the reader along for the ride on that journey of discovery.


Question: How important was it for you to share this story?

Melissa Fagan: It was important for me to write this story just to understand the various inheritances within my own family. But the story does touch on a lot of themes that I hope other people will relate to: the way women create an identity, and connect with each other, through the clothes they wear; the success and failure of family business across generations; the success and failure (mostly failure!) of marriages; gambling and horse-racing; love and loss; intergenerational trauma.

Melissa Fagan: I've just started work on something that could be broadly considered a collection of travel essays. I'm interested in exploring my own relationship with the sea, and also the ways in which people and places are connected, and disconnected, by our shared use of the world's oceans and seas.