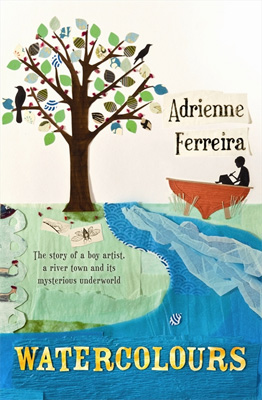 The story of a boy artist, a river town and its mysterious underworld.

Eleven-year-old Novi just wants to blend in -- not easy when you're named after a silkworm and have the most eccentric family in town. A descendent of the first Italian silk growers in northern New South Wales, he is an obsessive artist with a habit of drawing the stories of the people around him, and a secret conviction that the river murdered his grandfather.

Young teacher Dom Best is new in town and must overcome his lack of confidence to support Novi's talent. Together with Camille, the enigmatic school librarian, Dom encourages the boy to release his inhibitions and unravel his unusual family history through his art-- though little can he imagine the consequences this will bring. Watercolours is a poignant debut novel with a mystery at its heart, an unexpected love story and a surprising twist.

Most of all, it celebrates the clarity and colour a child's-eye view brings to the adult world.

Adrienne Ferreira was born in Sydney in 1975 and grew up on the mid north coast of NSW. She is currently working on her second novel, about a young housewife who becomes obsessed with a foreign sailor watching her from one of the coal bulkers lined up just outside her cliff-top house - an exploration of youth, aging and the discomfort of transition.

She lives on the NSW Central Coast with her husband (actor, producer, playwright and screenwriter Rob Carlton) and their twin sons.