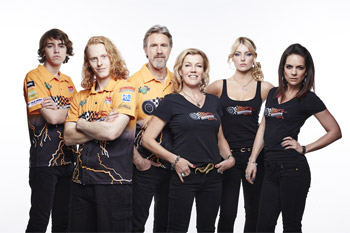 ABC TV is thrilled to announce filming has commenced on the hotly anticipated return of Australia's best loved and most acclaimed family comedy, Upper Middle Bogan.

Created, written and produced by Robyn Butler and Wayne Hope, the eight-part comedy series that focuses on the culture clash of the upper middle Brights and drag-racing Wheelers, will again film in and around the suburbs of Melbourne.

Series Creator/Producer, Robyn Butler said, 'We're so excited to unleash the wild, loud and sometimes potty-mouthed world of Upper Middle Bogan. But enough about Robyn Nevin - we love all the cast and can't wait to make this season".

ABC Head of Comedy, Rick Kalowski said, 'It took some prompting, but we're beyond thrilled Robyn Butler and Wayne Hope agreed to give the country more of its favourite family comedy Upper Middle Bogan.  May the road from the Brights' to the Wheelers' go on forever."

Upper Middle Bogan Series 3 sees Bess Denyar (Annie Maynard) continuing to strive for a happy union between her adoptive upper middle family and her biological bogan family. Two years have passed since Bess, an upper middle class doctor, discovered she was adopted and found her drag racing, biological parents living in the outer suburbs. With her two families, the Brights and the Wheelers, each now facing a brand new set of challenges - moving houses, illness and injuries, relationships ending and beginning - Bess struggles to manage her families living at opposing ends of the freeway, with varying levels of success. Often caught in the middle of two tribes, Bess' dreams of life as one big happy clan seem almost impossible… but only almost.

Upper Middle Bogan and It's A Date

From the creators of The Librarians and Very Small Business and directed by Wayne Hope and Tony Martin, when an...