Ahead of Breast Cancer Awareness month, a now global phenomenon, a new national survey points to a surprising number of Australian women still living in the dark about their personal breast cancer risk. While almost two-in-three women know someone diagnosed with breast cancer, a mere 23% admit to undertaking adequate self-detection steps, and just under half with an immediate family member diagnosed is unaware of their heightened risk.

The findings are concerning, as having an immediate blood relative (mother, sister, daughter) with breast cancer not only doubles a woman's risk but lack of timely detection at an early stage increases the chance of the cancer spreading, which may make it harder to treat and beat.

To help combat the complacency, respected media personality Tracey Spicer has fronted a new documentary to encourage women to arm themselves with knowledge of their personal health profile and take action. Called Let's Talk About Breasts, the documentary follows Tracey, who confesses to going seven years without a mammogram, on a very personal quest through her own detection experience and showcases a group of her closest friends sharing their deepest fears, hopes and encounters with the disease.

Tracey Spicer notes, 'I am on a mission to empower as many women as I can to take action to get to know their breasts and cancer risk.

'I took the bold move to have my 3D Mammography exam filmed knowing something might be found, but I thought, if there is something ominous lurking then I want to get it early. Thankfully it was clear.

'I think others need to embrace the same mindset. Sharing my experience and talking to other women was a privilege but also an eye opener. The -it won't happen to me' mentality must stop because complacency is the worst enemy of a woman at high risk," Tracey added.

Cancer is a topic close to Tracey's heart, with one side of her family decimated by the disease, her own breast cancer scare, and dense breast tissue putting her at heightened risk, Tracey, 48, was referred by her doctor for a Genius™ 3D Mammography exam, which uses a newer technology clinically proven to provide a more accurate diagnostic mammogram.

While the national breast screening program invites women from the age of 50 to undergo traditional 2D mammograms, accepted as the gold standard in screening, it unfortunately is not without limitations for diagnostic testing.

Breast Radiologist at the Royal Women's Hospital in Melbourne, Dr Clair Shadbolt explains, 'Breast structures can overlap in a traditional 2D mammogram, which can cause some cancers to be missed or produce -false alarms' as normal tissue can appear as abnormal. This can lead to unnecessary further testing and increased patient anxiety.

'Whilst screening is the best option for most women, there is a group of women at a higher risk, such as those with a strong family history and women in their 40s with dense breasts, who may benefit from a diagnostic test such as a 3D Mammography exam. It's important high risk women know their options for the most beneficial detection method for their situation. My advice to women is to talk to your doctor to determine your risk level and the most appropriate course of action," said Dr Shadbolt.

According to Prof. Patrick Brennan, Professor of Diagnostic Imaging at the University of Sydney, whose research involves exploring novel technologies that enhance the detection of clinical indicators of disease, including 3D Mammography, 'Vast progress has been made in the breast cancer research arena – both treatment wise and in imaging techniques over the past 20 years.

'While survival rates continue to improve, now 96% at 5 years, the fact remains that breast cancer is still a harsh reality faced by many women and their families. My message is to get in early and take control of your health, because if something is found you want to give yourself the best chance for a return to good health," Prof. Brennan stressed.

The initial steps to breast cancer detection are three-fold; physical exams, screening and diagnostic mammography for those at high risk, but many women are failing at the first hurdle. Close to eight-in-10 are not regularly performing self-checks as recommended.

'If you think you are at risk or know of someone who may be, a 3D Mammography exam could be a great option for even earlier detection so I strongly encourage women to have that chat with their doctor if they have any concern," added Prof. Brennan. 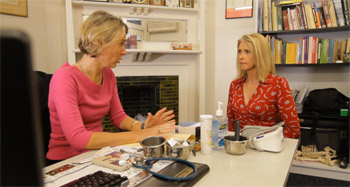 View the documentary at letstalkaboutbreasts.com/documentary from 21 September. Hologic will donate $1 for every view and share of the Let's Talk About Breasts documentary to the breast cancer prevention charity Pink Hope.

Friday 25 September is Pink Hope's Bright Pink Lipstick Day – get involved and share a conversation about your own family health history. Find out more at http://pinkhope.org.au/bright-pink-lipstick-day/.

Krystal Barter, Founder of Pink Hope says: 'We are really proud to partner with one of our long term supporters, Tracey Spicer and our new friends at Hologic. The Let's Talk About Breasts documentary is a powerful opportunity to get women and their families talking about breast cancer risk. We are thrilled to receive $1 for every watch and share of the documentary. This invaluable contribution to Pink Hope will go towards our Assess Your Risk tool to ensure families at high risk can empower themselves to make the best choices to manage their health."

Information about breast cancer detection methods is available at www.breastdetection.com.

Question: What is the documentary Let's Talk About Breasts?

Tracey Spicer: It's a pretty direct title, isn't it! I'm so proud of Let's Talk About Breasts. This is a -bare all' documentary about women's attitudes, approaches, and actions when it comes to breast cancer. While most of us know someone who's been diagnosed, only 23 per cent of women do self-detection. For those at high risk, only one-in-three examines herself every month, while one-in-five rarely, or never does. It's quite shocking.


Question: What inspired you to embark on the Let's Talk About Breasts project?

Tracey Spicer: Well, I'm ashamed to say I haven't had a mammogram for seven years, and do self-examination sporadically. In the past couple of years, several close friends have been diagnosed with breast cancer, in the 40s. The usual screening programs don't start until a woman turns 50. So there are a whole lot of women out there, with dense breast tissue, and perhaps a family history of ovarian or breast cancer, who aren't being diagnosed early enough. And early diagnosis saves lives.


Question: Can you share a little about your own family's cancer connection?

Tracey Spicer: One half of my family has been wiped out by cancer – pancreatic, in the case of Mum and Granddad. The BRCA1 gene is common to both breast and pancreatic cancers. I'm at heightened risk because I had a -false positive' breast cancer test in my 30s, and extremely dense breast tissue. It's hard to pick up problems using 2D mammography at my age, so my doctor recommended 3D mammography, which can detect more invasive breast cancers.


Question: How does this affect your detection fundamentals?

Tracey Spicer: While filming the documentary, I was taught how to (properly!) do self-examination. The recommended frequency is once a month. I've also committed to a mammogram every two years.


Question: What was it like to work with six other courageous women in the Let's Talk About Breasts documentary?

Tracey Spicer: I was left speechless by the courageous stories of the women in this documentary. Some had preventive mastectomies; others had recurring cancer, undetected by traditional mammography; one didn't realise she had a strong family history, because it was on her father's side. It made me realise that every cancer is different; every woman is different; every prognosis is different.


Question: What is your main message for the audience of Let's Talk About Breasts?

Tracey Spicer: Find out about your risk factors. Is there anyone in your family who's been diagnosed with breast or ovarian cancer? Do you have dense breasts? Have you noticed any changes or lumps? Then, speak to your doctor.


Question: How often do you undertake self-examinations?


Question: How do you remember to do these examinations?

Tracey Spicer: I put a reminder in my mobile phone.


Question: What can you tell us about the Genius™ 3D Mammography exam?

Tracey Spicer: The good news is that mammography doesn't hurt as much as it used to! A Genius 3D Mammogram examines the breast tissue layer by layer – almost like turning the pages of a book. The x-ray arm sweeps over the breast, taking a series of images at various angles. It can increase detection in women with dense breasts, which is common under the age of 50.