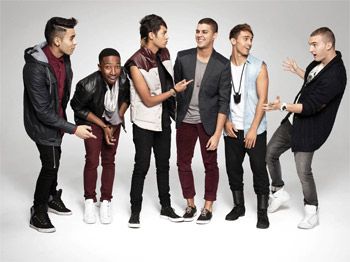 Titanium is a musical act taking the music industry by storm. They're essentially New Zealand's answer to One Direction. After winning a competition to form New Zealand's first boy band – held by New Zealand's The Edge radio station – Titanium's debut single -'Come on Home' rose to number one on the New Zealand Single's chart.

Titanium, made up of Zac Taylor, Andrew Papas, Jordi Webber, Shaquille Paranihi-Ngauma, Haydn Linsley and T.K Paradza, then smashed the country's records to become the New Zealand's first band to have four singles in the Top 40 at the same time following the release of their album, -All for you.'

Titanium have begun an exciting partnership with SOL REPUBLIC.

Jordi Webber: Getting decked out with free headphones, and being in a partnership with an awesome brand and team that just want to help us boys out.

Jordi Webber: Nothing beats performing live! Being on the stage is the highlight of this career for me! Out there, you're in the moment, there's no editing, no re-takes and a whole crowd of people that have come to watch you! It's for real and it gives you this massive adrenaline rush, I love that!


Question: For those who haven't seen, what is a Titanium performance, like?

Jordi Webber: A Titanium performance is more like a journey! We party, we get the crowd involved all the time, we have surprises here and there, we bring it right down so it's real intimate and then party some more! We want our concerts to be more of an experience than just another show, so we do everything we can to achieve that. 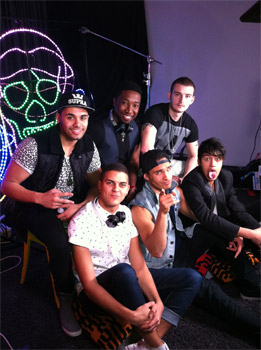 Question: What has been your favourite part of becoming a music artist?

Jordi Webber: Performing in front of thousands of people and having fun doing it. Through that, we have inspired many young musicians to follow their dreams, and that in itself is another big highlight for me


Question: Why is it important for you to keep in touch with your fans, via social networking sites?

Jordi Webber: Our fans are the muscle behind us! When we have an upcoming song or album, they are the ones that spread the word and tell the world! Without fans, we would have no one to lift us higher, spread our name further and cheer us on! Our Titans are our strength.


Question: How does performing and touring Australia differ to your home, New Zealand?

Shaquille Paranihi-Ngauma : It's different but it's still an amazing feeling. I guess the difference would have to be that Aussie girls are much crazier and have different accents!


Question: What's it like being referred to as "New Zealand's answer to One Direction"?

Shaquille Paranihi-Ngauma : It's good because they're so successful and we're hoping to be the same. But it will always be a privilege for us to be where we are at this point in time.


Question: Tell us a little bit about the competition that threw you onto the New Zealand main stage?

Shaquille Paranihi-Ngauma : It all started with the auditions, as all competitions do, and there were 500 to 600 people who auditioned. From that 500/600, the organisers made the top 10 and from that we all participated in a so called 'Boyband Boot Camp' which took 1 week. This boot camp was made full of challenges such as SAS fitness training every morning, busking, singing lessons, dance lessons and so forth. The sad thing was that as each day that went by a contestant was eliminated and on the last day the organisers decided to make a group of six which formed Titanium.


Question: How do SOL REPUBLIC differ to One Direction? What makes you unique?

Shaquille Paranihi-Ngauma : We're different because we're multi cultural, we dance and our sound is more R&B/Pop as opposed to Rock/Pop :)


Question: What's next for you guys; in Australia and at home?

Shaquille Paranihi-Ngauma : We have a lot of things coming but we just finished releasing our first single worldwide called 'Unarmed' written by Big Time Rush's Kendall Schmidt and Logan Henderson. We are also releasing our latest Album on the 4th of October called -All for You 2.0 Deluxe Edition.'


Question: Can you tell us a little bit about the partnership with SOL REPUBLIC and what it means for you?

Shaquille Paranihi-Ngauma : It's crazy good! Because their headphones are really amazing and they love to help promote the band in Australia and let's not forget we get some sweet headphones. It really means a lot to me also because I loved SOL REPUBLIC even before we associated with them.