The Winter Gypsy Took Me By Interview The Winter Gypsy Took Me By Interview

Indie folksters The Winter Gypsy have today announced their soaring new single and video for Took Me By (out July 8), the first taste of the band's debut EP, Page I which is set for release on August 5. To celebrate their new tunes, the Adelaide six-piece will be heading out on the road in August, kicking off in Melbourne on August 28 and moving through Adelaide, Sydney and Canberra, before returning to Adelaide for another home town show to end the tour at The Exeter on September 17.

Took Me By is a drifter, progressing through ambience to defiance and charactarised by delicate vocals and a strong pulse. Deliciously reverberous and subtle electric guitar riffs magnetise to the folky environment in which the song exists, meshing genres with effortless ease. Of the single, lead vocalist Tushar Singh says, 'The song itself is also about the uncertainty and fragility of situations that are out of your control. Despite the minimal lyrics, the song resonates this message through the specific choice of words."

To accompany the track, the The Winter Gypsy have also announced a breathtaking video clip that was directed by Gerard Wood (Timberwolf) and filmed in Mount Barker, South Australia, providing a magnificent backdrop to the quirky eeriness that charactises the visual. A group of young people congregate at an abandoned railway, moving only in slow motion and partaking in behaviours as yet unexplained by the band. Singh describes, 'I wrote this song about a period of time wherein my mum was battling cancer - I felt helpless because there was nothing I could do to make her better. I wanted to portray that thought into having a visual of someone restrained and 'crying out for help,' but having everyone run past me through the tunnel because there's nothing they can do to help me. I also wanted to place these random ideas into the video so that other people can depict their own story. Is everyone running away from a train? Do I get hit by a train at the end? Where did the live chicken come from? Who knows."

Took Me By is the first single lifted from The Winter Gypsy's debut EP. After garnering praise and play from Triple J, the group have pulled out all the stops to harvest this stunning collection of songs. Produced by Hugh Atkinson, and in the works since 2012, the EP encompasses all that is great about indie folk music in 2016; it remains true to the acoustic origins of the genre, yet embraces a varied array of different sonic influences. Page I deals with themes of friendship and community, as Singh explains, 'We aren't just a band; we think of ourselves as much more of a family. The six of us recording together brought us even closer, and we all motivated one another to keep reaching for new heights."

The Winter Gypsy will be hitting the road to celebrate the release of Page I, heading up the east coast of the country in August/September. Excited to play for new audiences, Singh says, 'We love performing live and fans can definitely expect a lot more energy compared to what they might usually hear on our EP or other recordings. There is a much greater build-up to either the intro or outro of our songs which really creates a fuller sound. We feel as a band that not only do we enjoy jamming these instrumentals, but it really pulls our audience together and draws them in for each song that we play."

Tush Singh: We're mostly an Indie Folk/Aternative band. Sounds that could describe us would probably be, Ambient, Eerie, Driving, soothing. Our main influences are, The Middle East, Bon Iver, Sigur Ros, The Paper Kites, Bombay Bicycle Club. There are more to name, but these are just a handfull of artists that influence us. 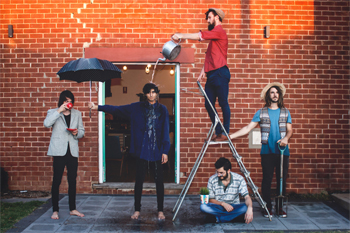 Question: What inspired the track, Took Me By?

Tush Singh: Back in 2008, Tush's mum was diagnosed with breast cancer, and she continued to battle this until 2011 when she finally overcame it. Following this Tush moved schools and really started to focus more on music.

The single "Took Me By" relates to the thoughts that were going through his head during this time in his life - "...Paradise we live in is coming to an end". However the song itself is also about the uncertainty and fragility of situations that are out of your control.

Despite the minimal lyrics, the message resonates through the song. It was written in 2012, and had previously been recorded three times, but due to the personal nature of the song Tush wasn't willing to release it until he was content with the sound; a feat that has now been accomplished


Question: Can you tell us about filming the video for Took Me By in Mount Barker?

Tush Singh: When I sat down and spoke to the film maker, Gerard Wood; he told me about an amazing spot that he'd always thought of filming. It turned out that the spot was an abandoned railway line located in Mount Barker, South Australia that had ceased activity in 1984. The location was picture perfect and ideas for the video started to flow.

The idea of having me tied to a couch and letting others run past me at the end of the clip is the first idea I thought of, and for me it's the most meaningful image relating to the song. It's written about a period of time when my mum was battling cancer, where I felt helpless because there was nothing I could do to make her better. It was out of my hands and I felt as though no one could help her. So I wanted to portray that thought by having a visual of someone restrained and 'crying out for help' but having everyone run past me through the tunnel because there's nothing they can do to help me. I'm more or less 'too far gone'.

The other ideas leading up to the end scene were just quirky little thoughts that I wanted placed in the shot to add that cluster of drawing the attention away from me being tied to the couch until the end scene.

Tush Singh: One of the greatest moments of my life. It's been a distant dream to be on the radio. Never in my entire life did I expect to hear my own voice on national radio. What a moment!

Tush Singh: I didn't realise how much work we had to put in to get this project off the ground. I mean we've only been a band since August 2015, but all that we've accomplished within a year, hasn't been an easy process. We put a lot of time and work into everything we do. We just make sure it counts.

Tush Singh: Yes I wrote my own songs. I actually can't read any chords on guitar, so I play by ear.

Tush Singh: We're touring in August/September for the first time through the East Coast (Melbourne, Sydney, Canberra and our home town, Adelaide).

Tush Singh: Haven't had that thought yet. Hopefully we never will.

Tush Singh: At the moment, I'm stuck between the both. I love recording as much as I love playing shows. As long as it involves music, I'm happy.

Tush Singh: Trying promote our own material when we were just starting out was hard, and it still is. In all honesty, the challenge is quite exciting.

Tush Singh: The normal day would just consist of hanging out with friends, jamming or going to work. Just a normal life, but I love it.

Tush Singh: Having our own music recorded that we're proud of, feels good as a musician. It's a great personal achievement.

Tush Singh: I came up with the name. I usually played backyard shows with Dave, (Pianist) when we both started to collaborate. Friends used to call us gypsies because of our style and the way we would just set up anywhere, shoeless, and play a set filled with random sounds involving, guitar, piano, melodica and xylophone, topped off with some vocal harmonies. Winter happens to be my favourtie season of the year. During Winter, 2014, I had come up with the name, and it stuck with me.