The Safest Place in London 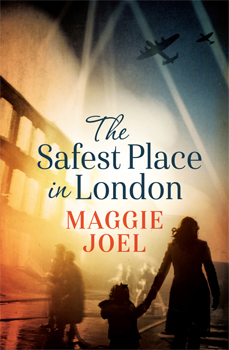 The Safest Place in London

Two frightened children, two very different mothers, and one night of terrifying Blitz bombing during World War Two. And when the bombs stop falling, which families' lives will be changed forever?

On a frozen January evening in 1944, Nancy Levin, and her three-year-old daughter, Emily, flee their impoverished East London home as an air raid siren sounds. Not far away, 39- year-old Diana Meadows and her own child, three-year-old Abigail, are lost in the black-out as the air raid begins. Finding their way in the jostling crowd to the mouth of the shelter they hurry to the safety of the underground tube station. Mrs Meadows, who has so far sat out the war in the safety of London's outer suburbs, is terrified - as much by the prospect of sheltering in an Eastend tube station as of experiencing a bombing raid first hand.

Far away Diana's husband, Gerald Meadows finds himself in a tank regiment in North Africa while Nancy's husband, Joe Levin has narrowly survived a torpedo in the Atlantic and is about to re-join his ship. Both men have their own wars to fight but take comfort in the knowledge that their wives and children, at least, remain safe.

But in wartime, ordinary people can find themselves taking extreme action - risking everything to secure their own and their family's survival, even at the expense of others.

Maggie Joel has been writing fiction since the mid-1990s and her short stories have been widely published in Southerly, Westerly, Island, Overland and Canberra Arts Review, and broadcast on ABC radio. The Safest Place in London is her fourth novel, the previous titles being The Past and Other Lies, The Second Last Woman in England and Half the World in Winter.

Question: What inspired the story of The Safest Place in London?

Maggie Joel: In the late 1980s I lived for a time in London's Eastend and, being new to the area, I began to read a little of the local history. During the worst days of the Blitz Londoners routinely sheltered in the underground stations to escape the bombing – this much I already knew, it forms part of the 'Blitz Spirit' that as a child in1970s and 1980s Britain I grew up with. What I did not know was that on 3 March 1943 as the air-raid siren went off and thousands of people rushed to the safety of Bethnal Green underground station, a woman at the bottom of the steps slipped. The resulting crush left 173 people dead, 62 of them children.

Reading about this tragedy more than forty years later, what struck me was that I had never heard of it before – how could that be, I wondered? What I later discovered was that, at the time, the story was deliberately covered up because the government was so concerned about its effect on morale. And in the intervening years the incident had been entirely forgotten. It was as though it had been air-brushed out of history.

I changed jobs and moved away from the area and twenty-five years passed. I had just completed my third novel when a chance conversation about wartime London with a friend's elderly mother reminded me of that incident: -My mum would never take us kids down the Tube to shelter as it wasn't considered safe,' she told me. -There were rapes and robberies and assaults and you were better off in your own home or taking your chances in the street with the bombs.' And all at once the myth of the Blitz Spirit became just that – a myth! But it certainly set me thinking...


Question: Was it difficult writing a book based in 1944?

Maggie Joel: Setting, that is time and place, are of primary importance for me when writing a new novel. All of my novels have a historical setting of some kind and to me immersing yourself in some other period is half the joy of writing. And having spent the best part of the last five years in late Victorian England (where my last novel was set) fast-forwarding to the 1940s was simple by comparison. Having said that a great deal of research did go into the novel because it was very important to me that the story is authentic. And this is a period that is still in living memory and is very well documented - meaning if you make a mistake someone is going to spot it!


Question: What research went into The Safest Place in London?

Maggie Joel: Placing my story in wartime Europe obviously meant historical research was necessary but I had already written a novel set in wartime London and had set a number of chapters of a later book during that period too. This meant I had already done a great deal of reading around the subject, albeit mostly about civilian London during the Blitz. 'The Safest Place in London' (despite its title!) takes place partly in North Africa in the months following the end of the North African campaigns - a subject about which I knew almost nothing so a fair amount of new research was required. Similarly parts of the novel focus on the black economy, the illegal and irregular activities happening on the fringes of society, and that, too, I needed to thoroughly investigate in order to get it right. I also talked to people about their experiences (something you obviously can't do for a novel set in Victorian London) so I quizzed my own mother and my aunt both of whom were children and teenagers during that period and that kind of spontaneous oral history is pure gold for a writer because you get the tiny, day-to-day details that never make it into the history books but that make a novel come alive.

Maggie Joel: No. I never write novels that are based on any real person. Partly because I don't want to get sued but also because that would detract from the fun of creating your own characters. But certainly the stories my mum and aunt told me went some way towards shaping the story. For instance, safe in the suburbs, my mother relates her worst wartime experience as the day the fridge broke down with no possibility of getting it mended for -the Duration'. (To put this in context, most people in London did not even own a fridge until well into the 1950s.) And yet not very far away thousands of Londoners – most of them poverty-stricken – were being nightly bombed out of their houses. The stark difference in people's experience of war, seemingly predicated on their social standing, forms a cornerstone of the novel.


Question: What is the best thing about creating a character like Nancy?

Maggie Joel: I think Nancy represents what we would all like to be in the face of terrible danger and adversity – someone who is determined, pragmatic, adaptable. She is single-minded and loyal – in her way! She is a survivor, purely by sheer grit and bloody-mindedness. On the face of it Nancy appears much better suited to the horror of war than the country/suburban housewife, Diana Meadows, who forms her counter-part in the story. Certainly Nancy is morally questionable but only in a way that, I think, we can understand and forgive her for, given her circumstances and her upbringing.