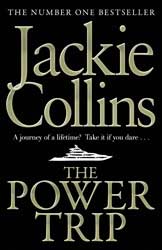 A Russian billionaire and his state of the art yacht. His beautiful and sexy supermodel girlfriend. And five dynamic, powerful and famous couples invited on the yacht's maiden voyage.

A senator and his lovely but unhappy wife. A very attractive movie star and his needy ex-waitress girlfriend. A famous black footballer and his interior designer wife. A male Latin singing sensation and his older English boyfriend. And a maverick writer with his Asian journalist female friend.Could this be the trip of a lifetime? Or a trip from hell?

Whatever happens on the high seas doesn't necessarily stay there.
The Power Trip - take it if you dare.

There have been many imitators, but only Jackie Collins can tell you what really goes on in the fastest lane of all. From Beverly Hills bedrooms to a raunchy prowl along the streets of Hollywood; from glittering rock parties and concerts to stretch limos and the mansions of the power brokers - Jackie Collins chronicles the real truth from the inside looking out.

Jackie Collins has been called a "raunchy moralist" by the late director Louis Malle and "Hollywood's own Marcel Proust" by Vanity Fair magazine. With over 400 million copies of her books sold in more than 40 countries, and with some twenty-seven New York Times bestsellers to her credit, Jackie Collins is one of the world's top-selling novelists. She is known for giving her readers an unrivaled insiders knowledge of Hollywood and the glamorous lives and loves of the rich, famous, and infamous! "I write about real people in disguise," she says. "If anything, my characters are toned down - the truth is much more bizarre."

Jackie Collins started writing as a teenager, making up steamy stories her schoolmates paid to devour. Her first book, The World is Full of Married Men, became a sensational bestseller because of its open sexuality and the way it dealt honestly with the double standard. After that came The Stud, Sinners, The Love Killers, The World is Full of Divorced Women, The Bitch, Lovers And Gamblers, Chances, and then the international sensation, Hollywood Wives -- a #1 New York Times bestseller, which was made into one of ABC's highest-rated miniseries starring Anthony Hopkins and Candice Bergen.

The Stud, The World is Full of Married Men, and The Bitch were also filmed - this time for the big screen. And Jackie wrote an original movie, Yesterday's Hero, starring Ian McShane and Suzanne Somers.

Readers couldn't wait to race through Lucky, her next book - a sequel to Chances - and the story of an incredibly beautiful, strong woman, another New York Times number one.

Then came the bad boys of Hollywood in the steamy Hollywood.