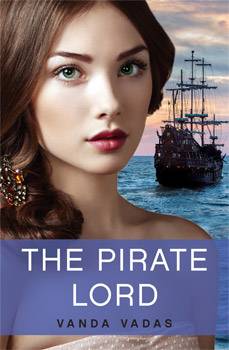 A family tragedy steeped in deceit and betrayal saw Lady Eloise Blakely vow never to fall victim to a man's charms, let alone invite him into her bed. Until fate swept her aboard a pirate's ship and into its captain's embrace.

Yet when he reveals a dark secret, her lover becomes her enemy.

Ten years ago, Miles Zachary Fenton was framed for murder. For so long he has fought to clear his name and reclaim his dukedom. Now, when both appear to be just within reach, he is forced to abduct a meddling beauty, one who wreaks havoc with his emotions and complicates his plans.

Before residing in Australia, Vanda Vadas's birthplace and early childhood years were spent in Papua New Guinea. At the age of eleven, a holiday in England sparked an interest in the days of old. Castles, ruins, and discovering Jane Austen novels inspired a life-long interest in all things historical, a passion that later kick-started Vanda's desire to write historical romance.

Vanda has studied and worked in the field of Education, teaching Literacy and Numeracy to children and adults. She's also worked as a PA, a recruitment consultant and now in home furnishings.

Her two children, of whom she's immensely proud, have flown the coop and are successfully making their own way in the world.

Vanda and her husband live on the Gold Coast in Queensland where they enjoy walks along world-renowned beaches or a quiet getaway to the lush hills of the Hinterland.