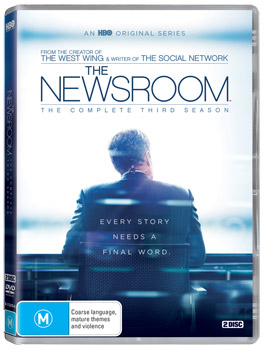 In the wake of the Genoa debacle, Will, Mac and the team are fighting an uphill battle to re-establish their audience and the standing of the ACN network. But when Neil unwittingly helps a government whistleblower, from the Department of Defence, steal classified documents, News Night finds itself investigated by the FBI on charges of treason with more that reputations on the line.

Meanwhile, ACN faces a hostile take-over from Blair and Randy Lansing, Leona's step-children and the possibility of life under Lucas Pruitt, a new media billionaire with a vision for a news network run by its audience.

Going beyond the headlines, the six-part season turns its attention inward, focusing on a series of internal events at ACN that rock the very foundation of the network, and tackles such topics as the protection of sources, the influence of social media on traditional news gathering and corporate takeover. The men and women of 'News Night" are faced with personal and professional dilemmas that will forever determine their futures.

Set against the backdrop of the Boston Marathon bombing, The Newsroom kicks off the season with a highly charged look at the core issue of maintaining journalistic integrity in the era of 24-hour news cycles, while crowd-sourcing and 'citizen journalism" result in the dissemination of misinformation.

Thanks to Warner Bros here is your chance to win one of 10 x The Newsroom: The Complete Second Season DVDs &...

In Season 2, it's a year later and in the days leading up to Election Night 2012, the News Night team is facing...