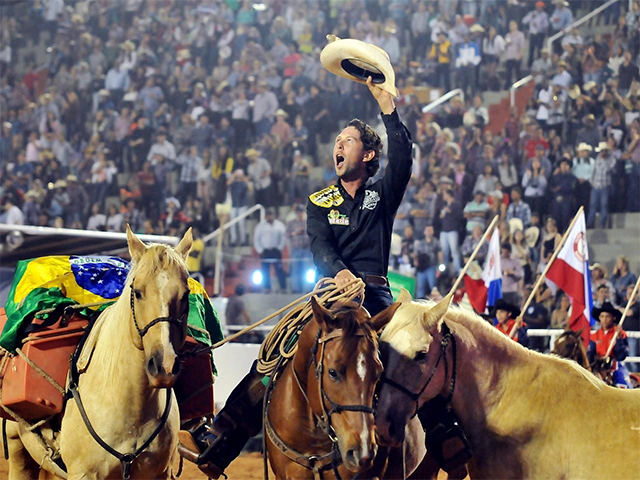 The award-winning western doc The Long Rider, from Sean Cisterna, will screen at the Dances With Films Film Festival in L.A.

A documentary/western, the film follows Filipe Leite, an aspiring journalist who leaves his adoptive home of Canada on an epic quest to ride from Calgary to his family's home in Brazil - and later beyond - entirely on horseback. Inspired by Aimé Tschiffely's 1925 equestrian journey, Filipe's 8 year odyssey of over 25,000 kms across 12 international borders, sees the young immigrant battle intense heat, drought, speeding transport trucks, nature's wrath and corrupt border guards on his history-making long ride home.

Sean Cisterna is a multi award-winning and versatile film director. His latest film is the feature documentary The Long Rider (2022), the expansive and inspiring story of Filipe Masetti Leite's journey from Canada to Brazil entirely on horseback, and filmed in 13 different countries. Cisterna found success with From the Vine (2020), an international coproduction starring Emmy winner Joe Pantoliano (The Matrix, Memento, The Sopranos), and distributed by Samuel Goldwyn Films. Cisterna directed the acclaimed cancer drama Kiss and Cry (2017), which topped the Canadian box office, and is currently streaming on Netflix worldwide. His 2015 feature Full Out, starring Jennifer Beals (Flashdance, The L Word), is based on the true story of gymnast Ariana Berlin. The film was broadcast on NBC, now residing with Netflix Worldwide and Disney Europe. Cisterna was awarded a Canada 150 Citizenship Award by the Federal Government for his dedication to and community engagement in the arts.

Filipe Masetti Leite is a world-renowned Long Rider, award-winning journalist, and best-selling author. The Brazilian born cowboy is the youngest person in the world to cross the Americas on horseback. In 2020 he was chosen as the Calgary Stampede's Grand Marshal and 'white-hatted' by Mayor Naheed Nenshi. He is the author of the best-sellers, Long Ride Home (soon to be a motion picture) and Long Ride to the End of the World, published in Portuguese (Harper Collins) and English, soon to be released in Spanish. Filipe is a regular contributor to The Toronto Star, a frequent guest on Rede Globo's Fantastico, Brazil's most watched Sunday night television show, and is writing his third memoir, Last Long Ride. His feature Documentary, The Long Rider, will be released in 2022 on Super Channel and Amazon Prime Canada. The first pair of boots he wore on his Long Ride are on display at the Bata Shoe Museum in Toronto and two statues, more than five meters tall, have been erected in Brazil to celebrate his feat.