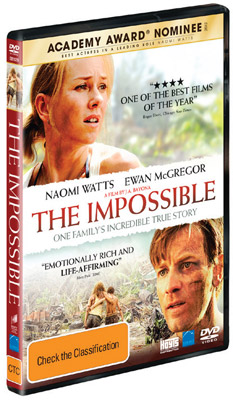 Based on a true story, The Impossible is the unforgettable account of a family caught, with tens of thousands of strangers, in the mayhem of one of the worst natural catastrophes of our time. Starring Academy and Oscar Award nominee Naomi Watts, and Ewan McGregor, the film uses remarkable performances and heart-stopping visual effects to engulf viewers in every terrifying detail of the tsunami.

Maria (Naomi Watts), Henry (Ewan McGregor) and their three sons are spending their Christmas vacation, in a tropical paradise resort in Thailand. But on the morning of December 26th 2004, as the family relax around the pool, a terrifying roar rises up from the centre of the earth, and their holiday suddenly becomes a battle for survival.

The Impossible follows the independent journeys of the separated family who persevere through the chaos and turmoil of post-tsunami Thailand to find each other amidst a sea of wounded, dying or dead tourists and locals.

The Impossible is a visually striking and emotionally rousing story based on one family's survival. But their true-life terror is tempered by the unexpected displays of compassion, courage and simple kindness that Maria and her family encounter during the darkest hours of their lives.